June 15, 1917: Death of Kristian Birkeland, King of the Northern Lights 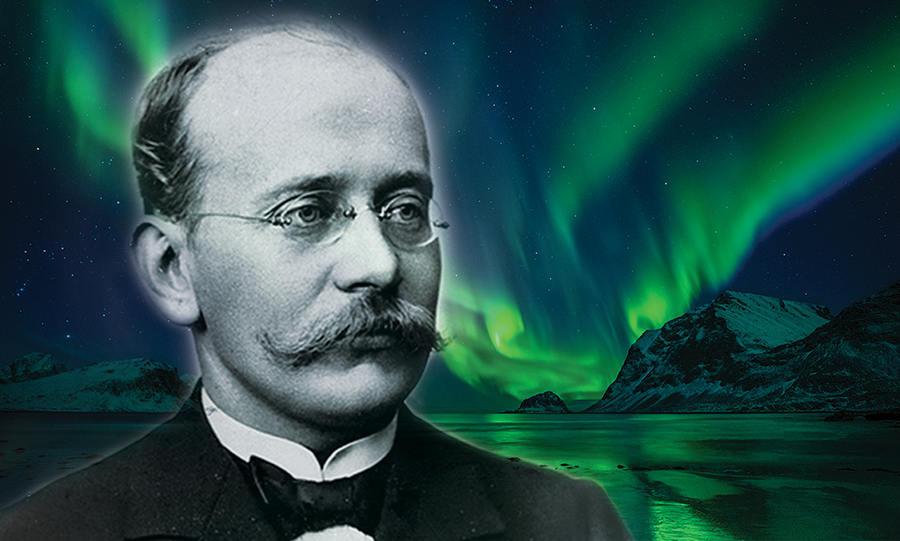 Kristian Birkeland. His face now adorns the Norwegian 200-kroner banknote, but he died decades before he was recognized for his work.

Physicist Kristian Birkeland was the first man to describe how charged particles from the Sun interact with Earth’s magnetism to create dazzling phenomena like the aurora borealis. But he did so at a cost, sacrificing money, community, and health in fervent pursuit of his goal: understanding the northern lights.

Born in 1867 in present-day Oslo, Norway, Birkeland’s passion for electromagnetism grew serious in his teens under the mentorship of a math teacher. At age 18, he published his first research paper. A few years later, he became the youngest faculty member in sciences and mathematics at what was then Norway’s only university—today’s University of Oslo.

But his academic career was just the start of his story. Birkeland had always been interested in auroras, the dazzling, colored lights that snake across the sky, especially in the Arctic and Antarctic. For thousands of years, cultures around the world had built myths about the auroras—some Indigenous people of northern Europe, like the Sámi, saw the lights as the souls of the dead—but scientists had no idea what caused them, and the harsh conditions of the far north deterred most researchers from studying them.

Until Birkeland. In 1899, he launched the first of many research expeditions to study auroras. In the depth of winter, he led a team through the Arctic Circle to map auroras and snowstorms, looking for patterns. The work was grueling and the environment brutal; two people died on the expedition. But Birkeland survived and returned home with reams of data.

After a flurry of analysis, Birkeland established a connection between polar electromagnetic currents and the aurora borealis. He published his theory, seeking international scientific recognition—especially from England’s most prestigious scientific institution, the Royal Society, whose validation could rocket his career to new heights. But the Society vehemently opposed his theory. One of their past presidents, the revered thermodynamics expert Lord Kelvin, had declared in 1892 that there was no relationship between sunspots and geomagnetism. The Royal Society took Lord Kelvin’s word as doctrine. Birkeland would fight for the rest of his career to gain British recognition for his auroral theories.

After his first expedition, Birkeland began planning a second one, but money was tight. The Norwegian government, which had backed his first trip, had grown frustrated with his shoddy bookkeeping, so Birkeland had to raise his own funds. He decided to invent what he thought would be a lucrative tool: a mechanism that could turn currents on and off quickly at hydroelectric power plants in Norway’s fjords. His design was well-planned but poorly executed—the mechanism exploded in testing.

Undeterred, Birkeland repurposed his switch mechanism into an electromagnetic cannon, or coilgun, that used electricity-powered coils to shoot missiles, an innovation that Birkeland thought could revolutionize warfare. It attracted enough attention from investors that he was able to finance another Arctic trip in 1902.

After the expedition, Birkeland—eager to fund his next trip—continued to rally investors for his electromagnetic cannon. But in 1903, the gun violently malfunctioned during a public demonstration, spewing flames in a deafening crack. “It was the most dramatic incident in my life,” Birkeland said later.

Birkeland’s ardor for the cannon faded, but not before he realized he could repurpose the invention for another, stranger use: fertilizer. Global populations were exploding, but there was not enough natural saltpeter fertilizer—vital to the world’s agricultural needs—to go around.

To solve this, Birkeland suspected components from his cannon’s design could be repurposed to produce nitric acid for artificial fertilizer. He wanted to build a furnace to test the plan, but he needed money. He shared his idea with an industrialist named Sam Eyde, who agreed to gather investments and let Birkeland use his waterfall properties to test the furnace.

But the partnership was doomed. Once Birkeland finessed the nitrogen fixation method today called the Birkeland–Eyde process, Eyde—eager to solidify his own wealth and prestige—began excluding Birkeland from their new company, nowadays known as Norsk Hydro. Birkeland had a nervous breakdown. The doctor prescribed him the barbiturate veronal, to which became Birkeland became addicted—and which would, only a few years later, claim his life.

Relegated to the edges of the fertilizer company, Birkeland used the proceeds he did manage to secure to return to auroral research. This time, he wanted to bring auroras into the laboratory by building a terrella, a small magnetic ball representing the Earth, first pioneered in the 1600s to model geomagnetism. Birkeland’s terrella mimicked how the Sun’s solar winds were triggering electromagnetic storms. Convinced the project would force the global scientific community to accept his research, Birkland held a public lecture in 1913, but it made no impact in England.

Dismayed, Birkeland left for Egypt to find and study another auroral event: the Zodiacal Light, an eerie, triangular patch of white light that can appear on the horizon during sunrise and sunset. He suspected that the Zodiacal Light was evidence of charged electrons from the Sun, and he wanted to calculate how these electrons, today called cathode rays, reached Earth.

His research went well for a time, but when World War I broke out, his expat community returned to Europe. Birkeland remained in Africa, growing increasingly isolated and paranoid. His dependency on veronal skyrocketed. In a last-ditch effort to find reprieve, he traveled to Tokyo to reconnect with an old colleague, but his mental and physical health spiraled. On June 15, 1917, he took a dose of veronal 20 times the amount he was prescribed and died in his hotel room alone. It’s not known whether the overdose was accidental.

At the time of his death, Birkeland was still seeking international recognition for his discoveries. But it would be another 50 years before that validation came. In 1967, a United States Navy space probe finally recorded observations of Birkeland’s solar winds and electromagnetic interactions, confirming the theories that Birkeland had developed so many years before. Today, he is celebrated as a pioneer in atmospheric electromagnetism, a contribution perhaps best summed up by the nickname given to him by his alma matter, the University of Oslo: “King of the Northern Lights.”

Abigail Eisenstadt is a science writer at the American Association for the Advancement of Science.

Jago, Lucy. The Northern Lights: The True Story of the Man Who Unlocked the Secrets of the Aurora Borealis. New York, New York: Alfred A. Knopf, 2001.

Brown, Bruce. “The Shining: The Mysterious Power of the Northern Lights.” The New York Times, December 12, 1982.

“The King of Northern Lights.” Apollon. University of Oslo.