APS Responds to the Crisis in Ukraine

As Russia continues its brutal assault on Ukraine, APS reaffirms its long-held commitment to international science and human rights.

“Our goals as APS are to support the affected physicists, to foster physicist-to-physicist engagement, and direct sanctions only toward institutions,” CEO Jonathan Bagger told attendees of a special plenary session at the recent APS April Meeting. Any sanctions would be proposed by the Committee on International Scientific Affairs and approved by the Board of Directors or its Executive Committee.

In the days following the February 24 invasion, APS condemned Russia’s unprovoked aggression toward its sovereign neighbor and decried military operations upon or near nuclear facilities such as the Zaporizhzhia power plant.

Now, APS is working closely with the US National Academies of Sciences and its Ukrainian counterpart to secure short-term appointments for scholars affected by the invasion. APS is also providing membership and publications assistance to physicists impacted by the conflict, so they can remain connected to the global physics community, participate in the Society’s activities, and access and publish in APS journals. The Physical Review journals continue to base editorial decisions on existing criteria and welcome submissions from authors of all nationalities. 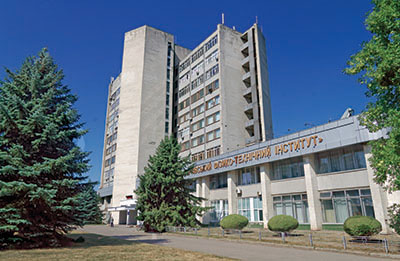 The Kharkiv Institute of Physics and Technology (KIPT), a Ukrainian physics institute, in a photo taken last year. The institute was damaged by Russian shelling in March, according to the state nuclear inspectorate.

During the April Meeting session, George Gamota, a Ukrainian-American physicist and international science and technology consultant, explained that APS’s support of Ukrainian scientists dates back to the collapse of the USSR, when the Society created an “emergency aid program” (EAP) to provide funding to former Soviet scientists to continue their research (see APS News April 2015, Ukrainian Scientists Need Our Help).

“To a large degree, American scientific organizations were slow to react [to the breakup of the Soviet Union]. Except for the American Physical Society,” said Gamota, who as a young child fled the Soviets in his native Ukraine soon after World War II ended. His family settled in the United States.

Soon after the Soviet Union’s collapse and APS’s launch of the EAP, Gamota returned to Ukraine for the first time since he was a child. “What I found…was a country that was jubilant about being free and independent. I did not know what to expect. But I can tell you that I was exuberant.” He was the first American to visit some cities in Ukraine.

In 2015, following Russia’s unlawful annexation of Crimea and the formation of Russia-backed separatist states in the Donbas, APS again stepped up to support physicists displaced by the conflict.

“Today the whole country is being attacked,” said Gamota. “Its very existence is being questioned by an aggressor who does not even call it a war but a ‘special military operation’...”

The APS response to the crisis in Ukraine is guided by the Society’s mission and values, as well as its response to past conflicts. In 2002, for example, APS rejected calls to boycott Israeli scientists in response to a conflict in the Middle East, writing in a statement, “The APS strongly opposes attempts to isolate any scientific community.” In 1980, APS President Herman Feshbach similarly argued against boycotting Soviet physicists following the exile of Andrei Sakharov. These positions are consistent with the APS Statement on the International Nature of Science and International Scientific Cooperation, which notes that international collaborations promote peace, advance science, and benefit the whole of humanity.

Above all, said Gamota, the priority should be the safety and security of the Ukrainian people and their homeland. “Ukrainian scientists who remain in Ukraine are making molotov cocktails and are not worried about the research they would like to pursue unless it can help the war effort, very much like American scientists during World War II,” he said.

For more information about APS’s response to the Russian invasion of Ukraine, please visit the APS response page or join the Engage Online Discussion Community.