Need for Speed? Consider a Career in Motorsports Racing

Are you a physicist intrigued by fast cars? If so, consider a career in motorsports racing. Maybe you yearn to design a race car that barrels at a mind-boggling clip around the Daytona or Talladega speedways. Perhaps you’re curious how engines work, or you want to learn about the mechanics of keeping drivers safe as they fly around tracks.

Diandra Leslie-Pelecky, who earned her PhD in condensed matter physics, spent two seasons with Roush Fenway Keselowski Racing in North Carolina, learning about fast cars. She left wanting to teach people about the physics behind race cars, and what makes them fast but safe—and with her new book, The Physics of NASCAR: The Science Behind the Speed, she does just that.

In her book, Leslie-Pelecky notes that all cars in a NASCAR race are identical, except for the hood, roof, and trunk lid. From the drivetrain to the suspension to the shim under the right front shock absorber, each is built to exacting specifications. So why don’t the cars finish the race at the same time? 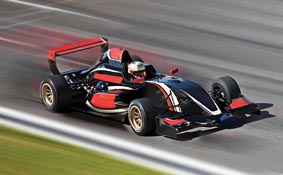 An F1 race car in action.

To answer this question, Leslie-Pelecky brings her physics know-how to the table. The car’s drag, she explains, can be influenced by the car’s roof and paint finish, making some cars faster than others. And while NASCAR specifies a roof shape using templates, skilled workers have enough wiggle room to manipulate the degree of curvature in the sheet metal. Even more strange, “slippery” paint—paint that helps air flow over the car with little drag—can, along with various finishes and clear protective coatings, make a car faster, sometimes by 0.1 second per lap. In a 500-lap race like the Daytona, this can add up to nearly a minute lead at the finish line.

And where physics is involved, there are usually career paths for physicists. Motorsport racing is no exception.

At the University of British Columbia (UBC), Andre Marziali, Director of Engineering Physics and Professor of Physics and Astronomy, leads a program on the physics of racing. The program has helped kickstart fascinating careers for students.

Hillary Cheng, one of Marziali’s former students and now an aerodynamicist for the F1 group at Mercedes-Benz, jumped into the world of racing during her first year at UBC.

“I joined the university’s Formula SAE [student design] team, where I contributed to the design, build, and testing of an open-wheeled race car,” she explained. After that, she said, she was “hooked.”

“It was my first glimpse into how much engineering goes into designing a race car and how complex and challenging it can be,” she said. Cheng also had the opportunity to intern at three companies, working on projects relevant to her future career at Mercedes.

If you decide to pursue a career in motorsports, you probably won’t have to compromise on pay. Motorsports companies want to hire the best and brightest, so they’ll offer premium salaries, especially for candidates who can master motorsports tool kits: Programs that calculate drag, hardware that measures flow, and wind tunnels to test cars.

So, if you have a passion for physics and a need for speed, consider motorsports racing. You won’t have a slow day.

To learn more about careers in motorsports, keep an eye out for postings on the websites of motorsports racing companies. APS also offers job fairs and job postings, as well as a mentoring program that can help you connect with someone experienced in the field. And visit the APS Careers in Physics webpage to learn about a broad range of careers for physicists.