On April 7, researchers reported in Science that the fundamental particle known as the W boson was 0.1 percent more massive than expected, a result that has shaken the physics world. Just two days later, these researchers brought their findings to the APS April Meeting.

The discovery could at last reveal how the Standard Model, the framework that physicists have used since the 1970s to understand the basic forces of the universe, is incomplete. As one BBC headline read, “Shock result in particle experiment could spark physics revolution.”

Instead of the predicted mass of 80,357 million electron volts, or MeV, the particle weighed 80,433.5 MeV—about 85 times the mass of a proton. The new measurement differs from the Standard Model prediction by “seven sigma”—seven times the measurement’s margin of error. This means that the chance the new measurement is a statistical fluctuation “is much less than a part in a billion,” said Ashutosh Kotwal of Duke University, who led the new analysis as a member of the Collider Detector at Fermilab (CDF), an international collaboration of some 400 physicists. 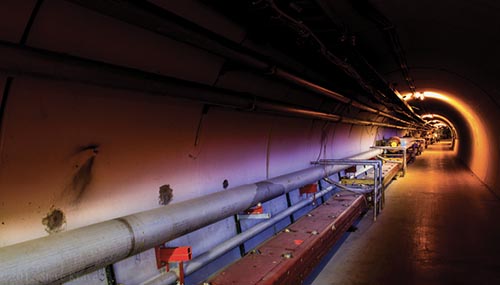 The now defunct Tevatron particle accelerator at Fermilab in Illinois, where physicists gathered the data that led to surprising findings about the W boson—findings published in Science on April 7, 2022, and presented at the APS April Meeting a few days later.

The result came two days before the 2022 APS April Meeting in New York City, and meeting organizers rushed to schedule a session for Kotwal and collaborators. At 7 a.m. on Tuesday, April 12, some 100 bleary-eyed meeting attendees, from graduate students to experts in the field, showed up to listen to the group speak over a Zoom video call projected in a hotel conference room.

“It’s such a major result, and it’s really great to hear it straight from the horse’s mouth,” said Glennys Farrar of New York University, who had read the paper before attending.

This discrepancy between measurement and theory may be exactly what physicists wished for. For years, the field has searched for holes in the Standard Model, as it does not account for empirical findings like dark matter and dark energy.

“It's an exciting time,” said fourth-year graduate student Kenneth Vetter of the University of California, Berkeley, citing other potential Standard Model-breaking results, such as anomalous B-meson decays. “Maybe we're coming out of the dark ages.”

Experts have long predicted that the W boson, which carries the nuclear weak force responsible for radioactive decay, could offer a window into physics beyond the Standard Model. Some theorists think that the particle’s mass could hint at the existence of yet-undiscovered particles, such as another Higgs-like particle, according to Kotwal.

CDF spent ten years analyzing its data before publishing the result this April, explained Kotwal. The mass measurement is based on about 4 million W bosons produced in the Tevatron, a now-decommissioned collider at Fermilab in Illinois, between 2002 and 2011. The Tevatron produced W bosons by colliding protons and antiprotons traveling near the speed of light. The collisions produce jets of other particles, including the W bosons, which quickly decayed into other particles.

CDF inferred the W boson mass by measuring the energy and direction of its decay products. To measure the mass so precisely, the researchers relied on cosmic rays—high-energy protons that naturally arrive from space. When cosmic rays hit the atmosphere, they produce showers of fast muons that move in straight lines. CDF used these muons to align parts of their detector to a micron, said Kotwal.

Now, the scrutiny begins. “The detailed questions are going to come out over the next year, as people external to CDF start to dig into this result,” said Gordon Watts of the University of Washington, who attended the talk. For Farrar, the result raises questions regarding models of proton innards, known as parton distribution functions, on which the W boson mass measurement relied.

Kotwal is prepared for the feedback. “After eight or nine years of internal scrutiny and checking, at some point you are ready to say, ‘let’s open the box,’” he told APS News.