The human body is full of tiny machines.

No, this isn’t a conspiracy theory: Your cells contain countless proteins that help you convert food, or chemical fuel, into motion. When your heart muscle contracts or your chromosomes pull apart during cell division, these molecular machines are hard at work. This year’s APS March Meeting featured three sessions on such machines, including those that occur naturally and those designed by humans.

“Molecular machines” convert chemical energy into mechanical work and range in size from nanometers to hundreds of nanometers. Most naturally occurring molecular machines consist of proteins. These include myosin, which binds to muscle filaments to cause contraction, and kinesin, which shuttles molecules around cells in a walk-like motion. Many of these machines are also extremely efficient. The enzyme ATP synthase, for example, converts nearly 100 percent of free energy into mechanical work to create ATP, a molecule that provides energy to cells.

Research of these machines has taken off since the 1990s, with the rise of single-molecule manipulation and imaging techniques, says Nancy Forde of Simon Fraser University in Canada. Their study could reveal how cells interact with each other, a vital step toward understanding biological processes. 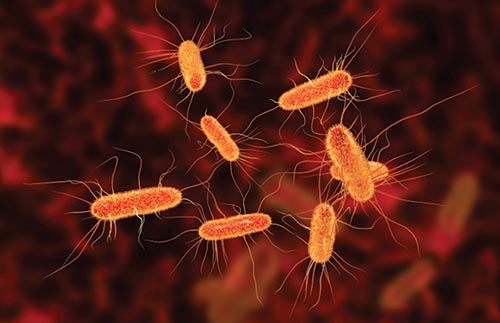 An illustration of E. coli bacteria, with tail-like flagella visible. At the 2022 APS March Meeting, Jasmine Nirody discussed her research on the E. coli “flagellar motor,” an example of a tiny “molecular machine.”

Some researchers, seeking to apply this research, have begun engineering tiny systems that use or are inspired by naturally occurring molecular machines. Recently, Ken’ya Furuta, of Japan’s National Institute of Information and Communications Technology, replaced the “feet” of the protein dynein so that it could carry its cargo along a strand of DNA, instead of along the microtubule structures that make up its normal route in cells. Similar artificial machines could eventually be used to deliver drugs to target systems or to control chemical reactions.

Shoichi Toyabe of Tohoku University in Japan presented recent work on ATP synthase, a protein found in the mitochondria of human cells and virtually all other organisms. ATP synthase has two “motors,” F0 and F1. F0 drives F1, and F1 catalyzes the synthesis of ATP, rotating 120 degrees to do so.

Toyabe’s team was interested in F1. Why and how did the F1 motor preferentially rotate in one direction? To find out, the team placed isolated proteins on a probe, which they rotated using a changing electric field. The team found that ATP synthase has a mechanism that prevents the F1 motor from reversing, which they call “rectification,” in analogy with an electric circuit, where a rectifier only allows current to flow in one direction. The work raises the question of whether other proteins also encourage cellular processes to proceed in a certain direction. Eventually, Toyabe hopes to build an artificial machine, inspired by the F1 motor, out of DNA.

Jasmine Nirody, a postdoc with joint appointments at Rockefeller University and Oxford University, presented research on flagella, the hairlike appendages that cells use to propel themselves (picture the single flagellum, or “tail,” of a sperm cell). A bacterium’s flagellum propels it via rotation, powered by ion gradients between the interior and exterior of the cell.

Research on the flagellum could inform the design of more adaptable artificial molecular machines, according to Nirody. While human-designed motors can usually only function in specific conditions, she says, “the flagellar motor navigates these heterogeneous and unpredictable environments within cells. That aspect is fascinating and something that we can really learn from.”

At the 2022 APS March Meeting, Nirody presented a new flagellum model, an update based on detailed cryo-EM images released by researchers in 2020. The new images revealed that the flagellum rotates like a gear, driven by another rotating component.

Nirody’s work, like Toyabe’s, could help researchers design better molecular machines. “What has evolution done that we haven't figured out how to do?” Nirody says.

Nancy Forde, presenting work led by her graduate student, Chapin Korosec, introduced an artificial molecular machine they had created, dubbed “the lawnmower,” the outcome of a 15-year international collaboration between biologists, condensed matter physicists, and nanoscientists. The lawnmower is an artificial, nanoscale spherical bead covered in trypsin, a protein in the digestive system that breaks down other proteins. When the lawnmower is placed on an engineered surface covered in molecules called peptides, it cleaves the peptides, cutting them like grass in a yard. The lawnmower also powers itself, harnessing free energy released from the clipped peptides to continue moving.

The lawnmower’s design draws inspiration from the influenza virus, which is also spherical, sticks to cells, and cleaves cell receptors.

While Forde’s team could not control the lawnmower’s trajectory, they found that the lawnmower moved in a biased direction away from regions it had already mowed. Its average speed reached 60 nanometers per second, which is about the rate that grass grows.

Forde aims to use the underlying architecture of the lawnmower to create other types of molecular machines. They designed the lawnmower to be modular, so researchers can easily change its design—swapping the trypsin for another protein, for example, or changing the size of the quantum dot to tailor it for a specific application.

Eventually, Forde hopes to create molecular machines that can do “what nature has evolved proteins to be able to do,” she says. “It gives you this amazing appreciation of what nature has managed to evolve.”