May 24, 1686: Daniel Gabriel Fahrenheit and the Birth of Precision Thermometry

If you start your day by checking the temperature outside, you regularly rely on precision thermometry.

Indeed, it’s difficult to imagine a world before temperature could be precisely measured. Precision thermometry lets us cook our food, heat our homes, and detect fevers, all with pinpoint accuracy—and as a society, we use precision thermometry to understand the climate, optimize industrial processes, study thermodynamics, and so much more.

We owe this in large part to Fahrenheit—not the temperature scale, but the man after whom it is named. His name is ubiquitous, but his story is little-known and surprisingly dramatic.

Daniel Gabriel Fahrenheit was born on May 24, 1686, to a well-off mercantile family in Danzig (now Gdańsk), Poland. In 1701, tragedy struck when he lost both his parents to a bizarre and terrible accident: They unwittingly ate poisonous mushrooms.

The orphaned 15-year-old Fahrenheit was taken in by guardians and placed as an apprentice bookkeeper to a merchant in Amsterdam. Though bright, he spent his time diving into newfound passions—physics, mathematics, and, fatefully, glassblowing—instead of bookkeeping.

Fahrenheit became fascinated with thermometers when the Florentine thermometer, invented in Italy decades earlier, began circulating in Amsterdam. The Florentine thermometer—a glass tube with an alcohol-filled bulb connected to a closed stem—was the first thermometer based on a liquid’s expansion and contraction, independent of barometric pressure. The instrument was a leap forward in terms of functionality, but suffered from a major design flaw: No two instruments registered the same temperature, because there was no standard way to calibrate thermometers. People instead set their own reference points for the high and low temperatures of these early thermometers, ranging from the point at which butter melts or coals burn, to the warmest or coldest days of the year in the city where a particular instrument was made. 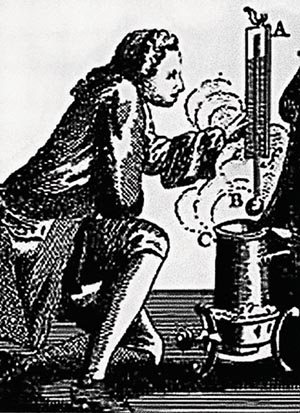 Gabriel Daniel Fahrenheit, inventor of the mercury thermometer and the Fahrenheit temperature scale.

The teenage Fahrenheit, to his guardians’ irritation, threw himself into the challenge of developing a precision thermometer that would be reliable everywhere—and he needed money to do it. His late parents had left him a small inheritance, but he couldn’t access the funds until he turned 24. So when his apprenticeship ended, he borrowed money to fund his experiments and quickly fell into debt.

His guardians, legally responsible for this debt, were enraged. They plotted Fahrenheit’s arrest and deportation to present-day Indonesia, where he would work as a seafaring laborer for the Dutch East India Company until he repaid them.

But when the arrest warrant was handed down, Fahrenheit was nowhere to be found: Unfortunately for them but fortunately for physics, he had fled the country.

Fahrenheit passed through Germany, Denmark, Sweden, and Poland while on the run from the Dutch police. In 1710, he turned 24 and settled his debts, but he stayed on the move, brushing shoulders with natural science luminaries, learning new glassblowing techniques, and dispatching ever-improving versions of his thermometers across Europe.

Fahrenheit toiled for years to perfect a reliable, standardized thermometer. He caught a major break when he started experimenting with instruments containing mercury instead of alcohol. Mercury has a much higher boiling point than alcohol and can therefore expand the range of measurable temperatures. And unlike alcohol, mercury doesn’t wet the walls of glass tubes, enabling much more accurate readings.

Armed with this insight and deep skills in instrument-making, Fahrenheit forged ahead. In 1714, at the age of 28, he achieved his goal: developing a pair of thermometers that gave the same temperature reading.

But what about the numbers on the Fahrenheit temperature scale?

Fahrenheit came up with those, too—and while the points on that scale may seem random, they were logical for the standards of the time. The decimal system was not widely used yet, so neatly divisible numbers were considered the most elegant, since they avoided the need for fractions.

So, Fahrenheit calibrated his temperature scale between 0 and 96. Conveniently, 96 was a highly composite number divisible by 2, 3, 4, 6, 8, 12, and more. He defined 0°F as the freezing temperature of a brine solution made from equal parts water, salt, and ice, and 96°F as the temperature of the human body, which he measured by placing the thermometer under his arm (This would later prove slightly inaccurate: Human body temperature is 98.6°F). In this scheme, water freezes at 32°F (perfectly one-third of the way between 0 and 96) and boils at 212°F (180 degrees—another highly composite number—from water’s freezing point).

Initially, the Fahrenheit scale was widely adopted, a trend driven by enthusiasm in England, where Fahrenheit had developed a high profile as a member of the British Royal Society. And as the British empire expanded, the Fahrenheit scale—along with metrics like miles, pounds, feet, and ounces—would spread, too, dominating the Anglophone world and much of the globe in the 18th and 19th centuries.

But in 1742, nearly three decades after Fahrenheit’s innovation—and just six years after his death at age 50 from what may have been mercury poisoning—Swedish astronomer Anders Celsius developed a more intuitive (by today’s standards) temperature scale set between 0 and 100. The original Celsius scale used 0°C as the water’s boiling point at sea level and 100°C as its freezing point, purportedly to avoid dealing with negative-number readings, an all-too-relevant concern during harsh Swedish winters (the scale was inverted to its present form after Celsius’ death).

After the French Revolution, France quickly integrated the Celsius scale into its burgeoning metric system, which it had developed to unify the country under standardized units of measurement. By the mid-1800s, much of Europe had fully adopted the metric system. In the mid-1990s the International System of Units was formalized, and most countries still using the Fahrenheit scale and other imperial units opted for “metrication” (see APS News May 2019).

But despite the ubiquity of the metric system worldwide, the United States famously remains an outlier, one of only three countries in the world to use the Fahrenheit scale and other imperial units (and the other two, Liberia and Myanmar, have already announced their intentions to switch to the metric system). Despite some efforts to convert to the Celsius scale and other metric units (for a short-lived moment in the 1970s, Congress even established a Metric Board to lay the groundwork), public sentiment in America has sided with Daniel Fahrenheit.

Call it aesthetic preference, a matter of convenience, or gratitude for the pioneer of precision thermometry—300-year-old habits die hard.

Abigail Dove is a freelance writer in Stockholm, Sweden.

Grigull, U. “Fahrenheit: A Pioneer of Exact Thermometry,” Proceedings of the 8th International Heat Transfer Conference 1:9-18 (1986).