Q&A with Michael Ramsey-Musolf, Advocate for LGBTQ+ Inclusion in Physics

Michael Ramsey-Musolf’s challenging experiences as an out gay physicist started in the 1980s and led him to become a firm advocate for sexual and gender minorities in the academic world.

Ramsey-Musolf’s first encounter with physics came through a high school course. In that class, he says, a fantastic teacher turned him from hating science to enjoying quantum mechanics and special relativity. The experience was so transforming that he decided to study physics and math in college.

Ramsey-Musolf obtained his bachelor’s degree from Pomona College, California, in 1984 and then went on to earn a PhD in theoretical particle and nuclear physics at Princeton University. It was there, in the middle of the AIDS epidemic, that he came out as being gay to family, friends, and colleagues. Motivated by the desire to help economically disadvantaged youth, he also began studying to become an Episcopal priest. He was ordained in 1994—the year he also became an assistant professor. Now, Ramsey-Musolf holds professorships at the University of Massachusetts, Amherst, and at Shanghai Jiao Tong University, China, where he is trying to uncover why the Universe has more matter than antimatter. He is also helping to build an academic environment that’s inclusive to LGBTQ+ physicists. Physics spoke to Ramsey-Musolf to learn about what drives him to advocate for the inclusivity of sexual and gender minorities in physics.

All interviews are edited for brevity and clarity. 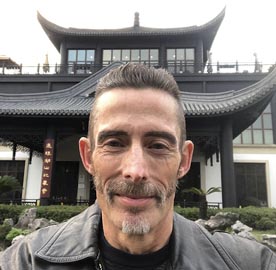 What compelled you to start advocating for increased diversity and inclusion in physics?

My first faculty position was at Old Dominion University in southern Virginia, where I saw racism up close and personal. Southern Virginia, being a very conservative place, was also a tough environment in which to be openly gay, so I moved, eventually ending up at the University of Connecticut.

I had a very difficult experience with harassment in Connecticut that impacted my mental and physical health. That experience politicized me and led me to be more outspoken about LGBTQ+ issues. I then moved to the California Institute of Techology, which felt to me like a nirvana for both science and inclusivity. It was a place where my husband and I were welcomed and loved. However, the funding for my position was not secure, so I had to move again.

At the University of Wisconsin, where I went next, I had supportive colleagues, but I still experienced discriminatory treatment that distracted me from science and came with high legal expenses. It was because of these experiences that I decided to start being more open about discussing sexual and gender identity issues. But the real turning point for me in taking an active advocacy role was the 2012 APS March Meeting.

I participated in a panel discussion on the issues faced by sexual and gender minorities in physics. The session was organized by Elena Long, a transgender physicist at the University of New Hampshire. When I was a student Princeton, Elena had heard me give another scientific talk and had noticed the rainbow flag that I had put on my slides to identify myself as LGBTQ+.

The people in the session that Elena arranged included others who—along with Elena—had previously formed a grassroots organization to create more awareness of the experiences of LGBTQ+ physicists. I joined them, and we’ve since put together a Best Practices Guide for institutions on how to help mitigate the challenges faced by members of the LGBTQ+ physics community.

Can you give some examples?

The Best Practices Guide summarizes five actions that physicists and institutions can take: assess and address the climate, break the silence and invisibility, set the example and expectations, educate and advocate, support and include. Specific examples include training people to be LGBTQ+ allies and making public who those allies are, inviting people to share their pronouns, and providing safe spaces for queer folks to gather on campus. On a bigger scale, institutions can re-weigh the criteria that they use for hiring academic faculty to better account for the obstacles people from minority backgrounds and identities have had to overcome during their career.

Do you have any success stories you can share?

In 2018, Brookhaven National Laboratory (BNL), New York, offered up scholarships for minority postdocs to lecture at the lab. I wanted to nominate a gay, non-white individual. But sexual orientation was not listed in the scholarship criteria. I asked why. That led to a discussion between me and the BNL staff and to a policy change for the scholarships.

Why do you think that the LGBTQ+ community has historically been overlooked in conversations about diversity and inclusion in physics?

The physics community’s awareness of discrimination parallels that of society. When I came out in the mid-1980s, I had to worry not just about whether my presence would be “welcomed” but also whether it would even be tolerated. Back then, physicists were talking about increasing the representation of women in physics, but they weren’t considering doing the same for LGBTQ+ folks. It wasn’t until the 2000s—when countries around the world began to recognize same-sex partnerships and legalize same-sex marriage—that LGBTQ+ folks started being included in physics-diversity conversations.

How have things changed in the last couple of decades?

Today in the US, for example, materials about diversity and inclusion now routinely include sexual and gender minorities. LGBTQ+ folks are also starting to be considered in things like planning of university facilities. For example, in 2018, the University of Massachusetts built gender-neutral bathrooms in the most prominent science building and added signage that points them out. That change sends a broad message to anyone entering the building that we’re an inclusive space. There are, however, many places in the world that are much less inclusive and others where being LGBTQ+ is still illegal. We have a way to go.

Speak up for what you think is right. Know that allies in our field will listen to you and support you.

Rachel Berkowitz is a Corresponding Editor for Physics based in Vancouver, Canada. This article was reprinted from Physics Magazine and is part of a series on the experiences of LGBTQ+ physicists. See also: Making Physics Inclusive to LGBTQ+ Folks; Life as an LGBTQ+ Physicist; and Wanted: LGBTQ+ Allies. To read the Best Practices Guide mentioned above, visit arxiv.org/abs/1804.08406.