Tom Gaisser, a particle physicist who calculated the complexities of cosmic rays, died February 20. He was 81.

Gaisser was an American Astronomical Society Fellow and APS Fellow, a spokesperson for the IceCube Neutrino Observatory, and a professor at the University of Delaware. He won accolades throughout his career, including the Humboldt Research Award and the O’Ceallaigh Medal for cosmic ray research.

“If you would think of one person who created the concept of ‘particle astrophysics,’ it was him,” said Francis Halzen, a particle physicist at the University of Wisconsin-Madison. Gaisser’s work between the 1970s and 1990s helped unify the newly-dubbed particle astrophysicists, who measured tiny things—photons, neutrinos, and muons—to explore enormous ones—supernovae, neutron stars, and black holes.

Despite his theoretical background, Gaisser valued fieldwork, visiting telescopes from Arizona to Argentina. Gaisser also journeyed to Antarctica to help construct IceCube and its surface array, IceTop. Even after he retired, Gaisser continued to collaborate on IceCube.

“He would get his hands dirty,” said Halzen. “He would shovel snow and make sure the photomultipliers were okay. He loved it.” In his honor, a federal committee named a 2.8-kilometer ravine in the frozen reaches of eastern Antarctica’s Gaisser Valley. 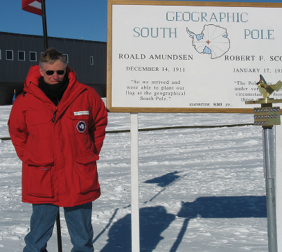 “Tom was basically very modest,” said Julia Gaisser, his wife. “It was only when I saw the University of Wisconsin website that I knew that a place in Antarctica had been named after him.”

Thomas Korff Gaisser was born in Evansville, Indiana, on March 12, 1940, to Clyde and Valada Gaisser, who owned an equipment business. He attended Wabash College and, in 1962, sailed to England on a Marshall Fellowship. Aboard the ship Queen Elizabeth, he met Julia Haig, another Marshall Fellow. The two were at different universities, but Gaisser wrote to Haig asking if she’d like to see some plays in London over the holidays. “After that, we just stayed in touch for the next 60 years,” she recalled. They married in 1964 and spent the next few years navigating the two-body problem of dual academic careers—Tom’s in physics, Julia’s in classics.

After postdoctoral positions at MIT and Cambridge University, Gaisser joined the Bartol Research Institute in 1970, where he remained for the rest of his career (the Institute merged with the University of Delaware). Julia Gaisser took a job as a classics professor at nearby Bryn Mawr.

At Bartol, Gaisser jumped from theoretical physics to cosmic ray research. In the 1970s, he and his colleagues applied particle physics to astronomy, treating the explosive showers generated by cosmic rays like high-energy colliders floating in the atmosphere. Gaisser was adept at calculating the parameters of air showers, computing their antiproton yields and, with Michael Hillas, longitudinal particle density.

In 1978, Gaisser helped organize the Bartol Conference in particle astrophysics. Half the participants were particle physicists who felt at home with accelerators, and half were cosmic ray researchers. Different communities of researchers came together.

Throughout the 1980s, Gaisser fleshed out the possibilities of particle astrophysics. “Tom was one of the first people to take the tools of particle interactions, and to use them to predict what kind of signal you might see from astrophysical objects,” said Jamie Holder, Director of the Bartol Institute. In 1985, Gaisser and Todor Stanev managed a tricky, precision calculation of the flux of atmospheric neutrinos from Cygnus X-3, a binary star system. The next year, he and two colleagues, Serap Tilav and Gary Steigman, did some of the first phenomenology of WIMP dark matter.

But by the late 1980s, underground Cherenkov detectors—repurposed to detect particles like neutrinos—had found an anomaly: Atmospheric neutrino fluxes that Gaisser had predicted didn’t match detector measurements. The result eventually led to the discovery of neutrino oscillations.

In 1990, Gaisser published Cosmic Rays and Particle Astrophysics. “I would not even call it a book; it's a working instrument,” said Elisa Resconi, an experimental physicist on IceCube, who worked with Gaisser on the second edition. Researchers continue to rely on Cosmic Rays, said Tilav, because “Tom was really a master of reducing really complex phenomena toward really easily understandable concepts.”

Other colleagues remembered Gaisser’s conscientiousness. “Tom was an absolute gentleman, who was one of the researchers that was really invested in the success of the people that he mentored or took on,” said Nigel Smith, the director of TRIUMF, Canada’s national particle accelerator center. Tilav, Gaisser’s first graduate student, enjoyed working with him so much that she returned to the University of Delaware. “I feel so orphaned at the moment, because he was always on the theory, I'm on the data part,” she said. “I feel like half of me is missing.”

“This is a gigantic loss,” said Resconi. “We were really shocked when we heard the news.”

Gaisser’s passions extended beyond physics; he loved chamber music, philosophy, and art, from the Old Masters to modern painters like Wassily Kandinsky and Diego Rivera. In 1977, Julia and Tom Gaisser combined Latin and physics expertise to write a paper, “Partons in Antiquity,” which suggested that Ancient Greek atomic theory was analogous to the problem of quark confinement, indicative of “the conflict between the notion of infinite divisibility and the idea of discrete elementary particles as the basic building blocks of the universe.”

“Tom was always very proud of that paper,” said Julia Gaisser. “I think he was proud of it because it was something we did together.”

Daniel Garisto is a freelance writer based in Bellport, New York.