Launched on April 24, 1990, the Hubble Space Telescope (HST) represents one of the most ambitious undertakings in the history of unmanned space study. Over 30 years in orbit, HST has taken more than 1.5 million observations, and this data has formed the basis of nearly 20,000 scientific publications on objects as near as the moon and as far as the most remote galaxies—not to mention the unforgettably beautiful images of cosmic phenomena that spark wonder about the universe and our place in it. In a broader sense, the story of HST is also an incredible showcase of the highs and lows of “big science”—large-scale, high-budget collaborative projects funded by national governments. As a commentator during the height of the Hubble saga in the 1990s surmised, “For most science news to get printed these days, it has to involve big bang, big bucks, big screw-up, or big comeback—and with Hubble you’ve got them all.”

The concept of a space telescope dates back to a 1946 paper by astrophysicist Lyman Spitzer in which he questioned what unimagined parts of the universe we might be able to access with “a large reflecting telescope, many feet in diameter, revolving about the Earth above the terrestrial atmosphere.” Spitzer outlined how a space-based as opposed to ground-based telescope could circumvent the turbulence of Earth’s atmosphere and better capture wavelengths of light outside the visible spectrum. Put simply, the place with the best view of space is space itself.

Of the many scientists who helped transform the space telescope from idea to reality, one of the most impactful—and underrecognized—was Nancy Grace Roman, remembered as the “mother of Hubble.” An internationally acclaimed astronomer in an era when few women were accepted in the field, Roman was tapped by a newly formed NASA in 1959 to serve as its very first Chief of Astronomy. By fostering connections between NASA and astronomy departments across the country, Roman is credited with establishing an ethos at NASA that major astronomy projects would be conducted for the benefit of the broader scientific community. In 1971, she convened a steering committee of NASA engineers and astronomers from around the country to design a space telescope that NASA could feasibly implement, along the way lobbying politicians and writing congressional testimony about the scientific value of such a project, even after funding was initially denied. 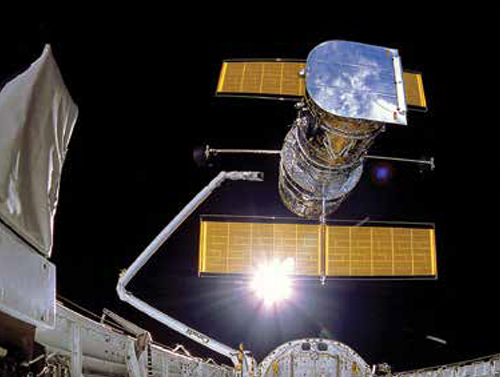 Hubble being deployed from Discovery in 1990

In 1977, three decades after the idea of a space telescope was first conceived, Congress at long last approved funding for what was then known as the “Large Telescope Project.” Designs for the telescope began in 1978, featuring a 7.8-foot, 1,825-pound primary mirror to collect light from objects in space, as well as several advanced instruments, including a wide-field camera, a high-resolution spectrograph, and a high-speed photometer.

HST’s launch date was pushed from 1983 to 1986 due to engineering challenges, and further delayed until 1990 in the wake of the Challenger disaster (see APS News, January 2021).

The setbacks did not end after HST was finally launched. After years of anticipation, the first images from HST—over 40 years and $1.5 billion in the making—appeared blurry and out of focus, a far cry from the crisp images expected from an instrument of this sophistication. The cause was later identified to be a spherical aberration: HST’s primary mirror had been ground too flat by a mere 2 microns, 1/50th the width of a human hair. The primary mirror was designed to bring 70% of a star’s light to the same focal point, but with this flaw it could only muster around 10%.

When news of this setback came to light, HST was heavily criticized in the media, lambasted in late night television sketches, and became the subject of a tense, high-profile congressional hearing over who was at fault for the flaw and how it should be fixed.

With HST’s fate and the space program’s reputation in jeopardy, disaster was averted thanks to two ingenious optical fixes. Work was already underway on a second-generation camera, WFPC2, to be later installed in a future servicing mission. Scientists realized that corrective optics could be implemented into this camera to compensate for the warped primary mirror. Separately, NASA scientists developed the COSTAR device—a set of corrective mirrors that could refocus the light paths of HST’s other instruments to properly focus their images, essentially acting as a pair of eyeglasses for the telescope.

In December 1993, a team of astronauts was ferried to HST to install the COSTAR device and replace HST’s original camera with WFPC2. Lasting 11 days and involving a record-breaking five spacewalks, it was one of the most technically complex missions NASA had undertaken to date. The risk paid off: The first images from the newly refurbished telescope to reach Earth later that month were crisp and clear, setting the tone for the jaw-dropping images that HST is now famed for.

While there is no set date for HST’s retirement, no further refurbishments are scheduled. Given the telescope’s aging hardware, the best estimates indicate that it will be brought back to Earth at some point during the 2030s.

It is perhaps fitting that the end of HST’s tenure in orbit coincides with the launch of the James Webb Space Telescope (JWST), sent into space on December 25, 2021 and currently undergoing calibration tests in preparation to begin data collection later this year. While not technically a successor of HST—JWST is primarily an infrared telescope, whereas HST observes the universe in visible and ultraviolet wavelengths—it was designed to push the boundaries in understanding that HST helped to establish. Among these include previously unaddressable questions surrounding “cosmic dawn” and the formation of the first stars as well as gaining further insight on phenomena such as the expanding universe, a concept first demonstrated a century ago by HST’s namesake, the legendary Edwin Hubble.