Bubbles are many things, like shiny and short-lived. But new research suggests the latter isn’t always true. Scientists have now invented “everlasting” bubbles that can survive for more than a year, according to a Letter recently published in Physical Review Fluids. Under the right conditions, these bubbles could theoretically last forever, because their composite liquid microparticle-populated films protect them from the usual processes that cause bubbles to pop.

The authors presented their new work earlier this year during an online Physical Review journal club session hosted by APS. A recording of the event is available on the APS YouTube Channel.

Baudoin and his colleagues theorized that covering water bubbles with such fluidic objects might prolong the bubbles’ lifespans by making their surfaces more resilient. But there was little progress in moving from theory to the design phase until the study’s first author Aymeric Roux (Université Lille) joined the team. Roux, a PhD student, designed a recipe to unite water and microparticle into one stable bubble. 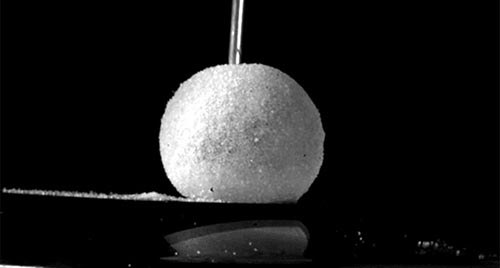 Still frame from a movie showing the opening of a 5.1mm (in radius) stable water/glycerol gas marble punctured by a needle after 33 days.

As the research progressed, the team discovered another group had already published a similar recipe for fluidic object-supported bubbles called “gas marbles.” However, compared to Baudoin’s work, the recipe reported in the other paper used bigger microparticles, were hydrophobic instead of hydrophilic, and contained surfactant in addition to water. Also, the paper did not examine the lifespan of gas marbles.

Like all bubbles, gas marbles typically have a relatively short lifespan that culminates in a dramatic pop. They typically die in one of three ways: gravity-induced drainage, evaporation, and surface encounters. Gravity-induced drainage causes a bubble’s liquid membrane to travel downwards. The film thins at the top and thickens at the bottom, until the bubble becomes unstable and ruptures. Similarly, evaporation causes a bubble’s film to lose liquid until it bursts. Encountering a surface can also trigger a bubble to open, which leads to a loss of gas and subsequent disintegration. Since the other paper did not discuss how these three causes impact gas marbles, Baudoin and his colleagues saw a path forward for their research.

They refocused their experiment on creating an immortal gas marble able to withstand popping from any of the usual culprits. First, Baudoin, Roux, and co-author Alexis Duchesne (Université Lille) had to establish a baseline for bursting. They created particle rafts and injected gas into water to form freestanding microparticle-supported water bubbles. Roughly 38 minutes after the water gas marbles formed, they ruptured. Through analysis, the team determined that this rupture was caused by evaporation. Drainage was less of an issue for the water gas marbles, because the microparticles were creating small capillary bridges. Essentially, these particles were attracting the liquid, creating a surface tension effect larger than that felt from gravity on this micro-scale. Surface encounter did not play a role.

The intuitive next step, according to Baudoin, was to try to prolong the water-based gas marbles’ lifespans by counteracting evaporation. They decided to add a hygroscopic liquid, glycerol, to attract water molecules in the surrounding air. Theoretically, the addition of that fluid would help recruit water back from the atmosphere into the liquid membrane to counteract rates of ongoing surface evaporation.

“With this recipe, we were indeed able to have some bubbles that lived for more than one year,” said Baudoin, noting that the bubbles, which eventually all popped after 465 days, may have done so because light entered their spheres and altered their compositions. The team also developed a model to better understand how the bubbles, made of composite liquid film and microparticles, were interacting over the course of the year.

“What we discovered is a new material, a long-lasting film,” he said, acknowledging that the film itself could be useful in fluidics research.

Following Baudoin’s presentation, moderator Jacco Snoeijer (University Twente) opened the online chat for questions. Participants discussed how the composite film bubbles without microparticles might behave in the Space Station, what the maximum achievable size could be for the bubbles, and whether microparticles’ size and dispersion were considered during the research. Other questions included where and how the bubbles were stored for the year and how small the bubbles could be made.

Snoeijer concluded the lively conversation by thanking participants for their attendance and commending Baudoin for his presentation on a “beautiful phenomenon.”

The author is a science writer at the American Association for the Advancement of Science. She was previously an APS science communications intern.