This Physicist’s “Business” is Family Business

Some physics-educated professionals prefer to keep family and business separate. Others, like Dr. Nadine Kammerlander, run towards their coalescence by studying and launching family businesses. As a professor of family business and chair of the Institute of Family Business and Mittelstand at WHU-Otto Beisheim School of Management in Vallendar, Germany, Kammerlander endeavors to understand what makes family businesses—the enterprises founded, owned, and managed by family members—tick.

It is a fascinating area of management scholarship and community service, given the huge number of family businesses that exist. According to the Family Firm Institute and Kammerlander’s research, 80-90% of firms in the United States are family-owned, which roughly matches many other regions of the world including Germany, China, Brazil and South Africa. In Germany, there are 2 million family businesses, and family firms employ more than 50% of the German workforce, she notes.

Kammerlander leads a team of researchers who aim to scrutinize the ecosystem and participants of family businesses, which range from mom-and-pop market stalls and shops to multinationals in every industry, through a marriage of robust scientific practices and innovative practical applications. While each enterprise has its own unique characteristics, there are many similarities. There is an authenticity, she shares, as families bind together in a collective pursuit of service and legacy. “Every family business is different,” she says. “There are so many emotions, history, and traditions here.” In fact, emotions often drive business decisions, and especially in good economic times, non-financial objectives, such as family harmony and reputation and job creation for family members, are often more important for family firm decision makers than economic goals, she notes. “Non-economic goals often appear ‘irrational’ to business partners – but they make perfect sense for the family!” 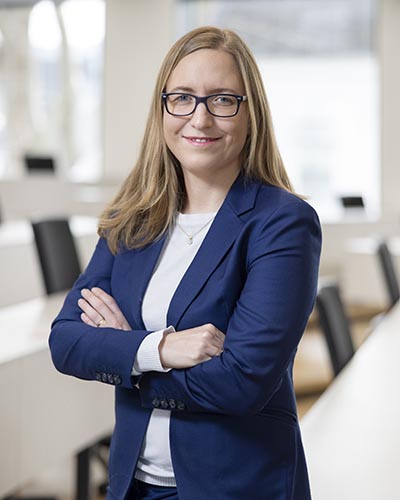 A key attribute that has shaped her perceptive nature and dedication to this field is her background in physics. A budding experimentalist, Kammerlander became enamored with physics in high school. She kicked it up a notch as a student at the Technical University of Munich, where she graduated with a diploma in physics, with a focus on laser physics, bio/nano physics and semiconductors. While she loved learning about the universe, she was confused (as most physics majors are) about her career prospects. “My last few years of my studies I realized I didn’t know what I wanted to do,” she says. “I couldn’t imagine being an engineer in a company- that wasn’t me.” But in her final year, Kammerlander got an invitation through one of her scholarships to attend a recruitment talk by representatives of McKinsey & Company, the world-renowned management consulting firm. Although she hadn’t considered that organization for herself, she decided to give it a go. Sure enough, the presentation was enticing enough that she ended up applying for a role and landed it. Kammerlander’s career was on its way.

Life at McKinsey was enjoyable, with opportunity to spearhead projects in product development in the automotive and high-tech sectors, and collaborate in a stimulating international setting with colleagues in Germany, the United States, and Mexico. When she learned that the company allowed its staff to pursue a PhD on paid leave, she jumped at the opportunity, and even received an offer to pursue one in physics in Munich. But Kammerlander’s priorities were crystal clear. “Family was very important to me and I always wanted a family,” she recalls. “I imagined taking on a PhD in biophysics and having to make the decision to stay home with a sick child or run an experiment, and that wasn’t for me.” So instead, she chose to get a PhD in management. But her time in consulting had uncovered a yearning to be impactful, and when it came time to focus her doctorate, Kammerlander realized that she could have the most impact by studying the category of business that impacts the most people globally: family businesses.

Her doctorate centered her sense of service and ignited a desire to discover and share more information about family enterprises, leading to her current position as a professor and scholarly leader in this space. Kammerlander’s research aims to clarify common challenges that family businesses face and offer sound, evidence-based solutions, something she syphons from her physics background. Her current investigations deal with digitalization. A standard scenario might be a family company that sells something in a “real world” location. As the next generation becomes more active in the day-to-day enterprise, they introduce new mechanisms to leverage technology to improve systems, sales, and market share. “Nowadays, kids are less likely to take over these old-fashioned businesses,” she says. “Instead, the kids are launching start-up ventures in the same industry as their parents but with a digital model.”

Kammerlander recently examined a furniture company, where the founder’s daughter sold lamps she had designed online, and later folded her business into her parent’s firm, expanding the family business beyond the brick-and-mortar. In another case, a family-owned hotel chain began utilizing software to speed up room service and decrease inefficiencies, as one of the children became more engaged.

This is critical work, and the stakes are high. Given the significance of family firms to economic health, if these businesses fail, it leads to higher unemployment rates, as well as the potential for foreign companies to swoop in and buy up these enterprises as they hit bankruptcies, resulting in high risk and volatile economies. “It’s important for us as scholars and society to make sure these companies can fit in the future,” she says. “When we identify best practices and barriers and teach them to the family businesses, they can run their business better and avoid the negative consequences related to unemployment, bankruptcy, and other challenges.”

To further enable the success of the businesses for which she cares so much, Kammerlander engages in lots of outreach, including hosting a podcast specifically for family-run companies. She also consults for businesses. One of her wins was collaborating with a business with 200-300 employees. One of the owners had read one of her papers and contacted her, asking for assistance in how they could upgrade to digital systems. “We worked with that company and did three design thinking workshops with owners, management, and employees, and the outcome was a roadmap for digitalization that they are implementing.” Now, Kammerlander and her team are expanding to present these workshops on demand.

Not surprisingly, physics has proffered a superb underpinning for her life’s work. From helping her understand statistics and the meaning behind data, to using logical proofing techniques she gained from her mathematical coursework to come up with “theoretical argumentation that is waterproof,” Kammerlander reaps the benefits of her degree all the time. “Even though physics and family business research are quite far away from each other, I still profit a lot from what I learned from my studies. It helps me focus on details and logic,” she says. “Also, sometimes I have an intuitive feeling if numbers are correct or not. I get my colleagues who say ‘I guess it’s wrong’. But it turns out I was right.”

In 2020, Kammlerlander became more than a scholar in this arena, as she, her parents and brother founded their own business that serves small and mid-sized companies needing support in sustainability. “I can now apply all the research here and see how this works in practice,” something which brings her and her kin a new sense of pride and joy. This spark reminds Kammerlander about the dawn of her journey, as a wide-eyed physics major, with a thirst to unravel our makeup, and a need to invest in her own family makeup. And it propels her further, as she continues today as a researcher and entrepreneur. “I love physics. It is great,” she says. “But I also love management research and I wouldn’t change my job for any other job in the world. It gives me so much freedom. There has never been a moment of boredom. It’s so pleasurable and enriching to work with family businesses.”