Otis Boykin, a Black man with a trim mustache in a jacket and tie, leans forward in profile in a monochrome photograph. He appears deep in concentration, carefully grasping an unknown object with a pair of tweezers. Whether the photograph is posed is unclear.

Labeled with the year 1958, the picture depicts the engineer in the era five years after the end of the Korean War, three years after Rosa Parks refused to give up her bus seat, and four years before the Cuban Missile Crisis. The photo is buried in the middle of a webpage belonging to a 125-year-old company called CTS Corp., still in existence today. Boykin worked there between 1954 and 1964, but his name does not appear anywhere on the webpage. In fact, the Internet yields mostly superficial descriptions of this man’s life.

Boykin invented electrical components. He devised designs for resistors and capacitors meant for mass production, as the government invested heavily in electronics for defense applications, and as Americans integrated television sets into their lives. Through his work at CTS Corp., Boykin’s resistors would be found in the cutting-edge technology of the time: guided missile systems, IBM computers, and the first implantable pacemakers. In honor of Black History Month, this column features Boykin’s story—an incomplete tale woven together from limited details available about his life.

Otis Frank Boykin was born in 1920 in Dallas, Texas, the seventh of eight children. His father was a pastor, and his mother worked as a housekeeper. She died when Boykin was just 12 years old. He attended the segregated Booker T. Washington High School and graduated as valedictorian of his class. In 1938, he matriculated at Fisk University, a historically Black university in Nashville, Tennessee, where he studied physics and chemistry. While at Fisk, he worked as a live-in domestic worker, or “houseman,” for at least two White families in the area. Boykin dropped out of Fisk in 1941, the spring of his junior year, according to the special collections of the university’s John Hope and Aurelia E. Franklin Library.

Boykin then moved to Chicago and worked as a parcel post clerk for Electro Manufacturing Company, where he handled accounting for the company’s president. During his stint there, Hal Fruth, a White engineer and consultant for the company, recruited Boykin as a lab assistant. 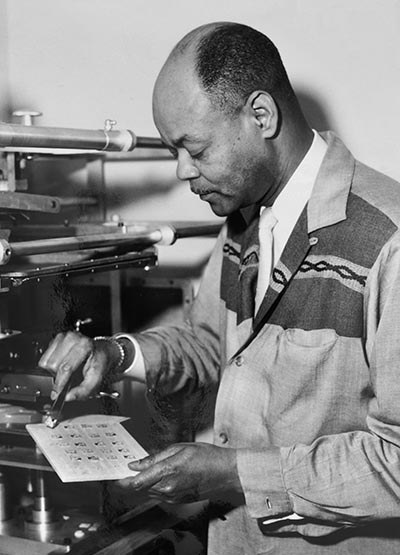 “Dr. Fruth always nodded pleasantly to me, but one day he stopped at my desk to ask, ‘how much education do you have?’ I detailed the extent of my training in science and he exclaimed, ‘I could use a youngster like you in my laboratory,’” Boykin recalled in a 1968 interview with The Pittsburgh Courier, an African-American newspaper.

With Fruth, Boykin tested automatic pilot control units used in planes during World War II. In 1949, after the war, the two started a company, Boykin-Fruth Inc., where they filed at least one patent for an inexpensive method to manufacture resistors. After joining CTS Corp. in 1954, Boykin began inventing more ways of making stable, inexpensive resistors.

Engineers had developed resistor technology significantly during the war. Military needs spurred them to devise electronic components that were functional in climates ranging from the Asian tropics to arctic temperatures in Russia, as well as in high altitudes in planes. These special requirements led to the standardization and miniaturization of these components. Coming out of the war, the electronics industry boomed with consumer demand for television sets and radios.

Boykin also coincided with the golden age of innovation for cardiac medicine—artificial pacemakers in particular, which delivered a steady electrical pulse to stimulate the hearts of patients with irregular heartbeats. First demonstrated around 1930, early pacemakers were large machines that stimulated the heart from outside of the patient’s body. The device invented by US doctor Albert Hyman, credited with coining the term “artificial pacemaker,” weighed more than seven kilograms. The pacemakers also needed to be plugged in, meaning they would fail the patient in case of a power outage.

But by 1957, Earl Bakken had invented the first wearable battery-operated pacemaker. In 1959, Wilson Greatbatch patented the first implantable pacemaker. During Boykin’s tenure at CTS, the company collaborated with Greatbatch, where they adopted Boykin’s resistor design for use in the device. The 1968 Pittsburgh Courier article mentions the resistor in its “control unit,” presumably the part of the pacemaker that sets its frequency.

It’s unclear which of Boykin’s multiple resistor designs was featured in the pacemaker. One possibility is his “cermet” resistor, standing for “ceramic metal,” patented in 1966. This resistor consists of finely ground glass mixed with metal powder on a thin substrate.

Another possibility is his wire-wound resistor, patented in 1961, in which a metal alloy is wrapped around a flexible insulator. In his patent, Boykin writes that his resistor could be made compactly by compressing the insulator into a ribbon shape and folding it up. This was an innovation upon the conventional wire-wound resistors at the time, which were spun around a spool and took up more space by comparison. Boykin also writes in his patent about minimizing the resistor’s inductance and capacitance effects, which would affect the shape of pulses if used in a pacemaker. Boykin also claimed that his design allowed for a stable robust to temperature fluctuations and extreme accelerations. The design resembles an in-between of two different resistor types, a wire-wound resistor and film resistors, which consists of a flat substrate with a thin deposit of metal or metal oxide, according to physicist Randolph Elmquist of the National Institute for Standards and Technology.

Boykin left CTS in 1964 and became an engineering consultant, where he had clients as far as Paris, France. As described by the Pittsburgh Courier in 1968, Boykin was a “reserved, soft-spoken, yet eloquent, well-dressed individual who golfs on week-ends, advises youth on sports and takes frequent trips to Europe in his business interests.” He also participated in an international effort to bring technological advances to the country of Guyana.

In later years, Boykin had a contentious relationship with his former employer. In 1975, Boykin sued CTS, alleging that the company unjustly acquired exclusive control over two of his patents. He also sued them for libel because the company claimed that Boykin improperly used their proprietary information. A year later, the lawsuit was dropped.

Boykin’s inventions offer snapshots in the evolution of technologies still in use today. Pacemakers have grown more sophisticated: one 2021 prototype from Northwestern University consists of entirely biocompatible materials that can be absorbed into the body in a matter of weeks. While wire-wound resistors are much less popular than thin film resistors because of their expense, people still use them in specialized applications. For example, the US government still uses wire-wound resistors as resistance standards because of their stability, says Elmquist.

Boykin died in Chicago in 1982 of heart failure. He was survived by his wife, Pearlie Mae Kimble, whom he married in the 1940s. They had no children. He held at least 25 patents at the time of his death.