As the discovery of the Higgs boson approaches its 10-year anniversary, physicists are busy building on its legacy. Although it was a tour de force, the experimental confirmation left many mysteries still unsolved. To find a way forward, physicists gathered virtually for a symposium at the 2021 APS April Meeting to discuss the potential for a muon collider—an ambitious new machine that could help answer many questions.

The symposium featured both a US perspective and a European one. The current flurry of activity has arisen from two formal processes in each respective region by which the particle physics community sets its priorities for the next decade. In the US, the process is known as Snowmass, named for the former location of the gathering, and organized by the APS Division of Particles and Fields. In Europe, the process is known as the European Strategy for Particle Physics.

Many researchers are excited about the machine’s potential for new physics. “The muons are calling, and we must go,” said Nathaniel Craig of the University of California, Santa Barbara, whose talk opened the symposium.

Craig explained how a muon collider is a good probe of electroweak symmetry—how the electromagnetic and weak forces are the same force at short distances, a bedrock of the Standard Model. At larger distances, the Higgs boson breaks the symmetry, but researchers still don’t know how. “Does the symmetry break in the way that the Standard Model predicted, or in a more complicated way?” Craig asks. For example, the muon collider could investigate whether multiple Higgs bosons exist to break the symmetry, beyond the one discovered in 2012.

The muon collider could also probe the nature of dark matter. One method would be to precisely compare the energy of the Higgs boson to its decay products, says Isobel Ojalvo of Princeton University. If energy is missing, it could correspond to dark matter. 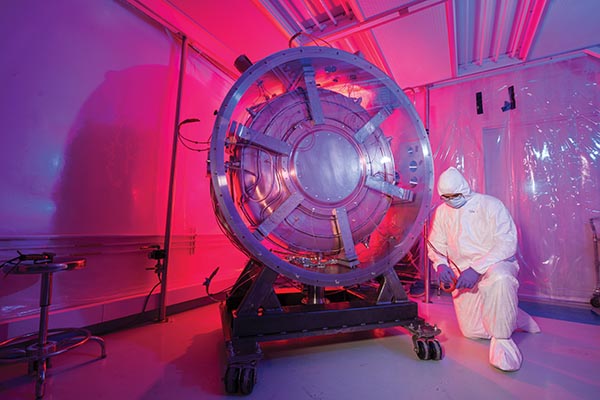 A proposed muon collider would use technology developed by the UK-based Muon Ionization Cooling Experiment (MICE) collaboration, whose experiment is pictured here.

Another big question is why particles come in different varieties known as flavors. The muon itself is a flavor of charged lepton, a category that also includes electrons. Generally speaking, using a different flavor of elementary particle in collisions could reveal something new about the categories, says Craig.

Another possibility is to build a "Higgs factory"—an electron-positron collider for precisely characterizing those particles—concurrently with a lower-energy muon collider in two different locations. The technology for the muon collider isn’t out of reach, according to Ojalvo. “If the US community decided that this was important, we could build a 1 to 5 TeV muon collider on a 10 to 15-year timeline,” she says.

However, a muon collider could also serve the role of a Higgs factory. The muon beam is surrounded by virtual particles such as W and Z bosons, which collide to form Higgs bosons at a high rate, says Craig. These processes are also predicted to produce "beyond the standard model" particles. Although not as "clean" as an electron-positron collision, compared to a proton collider muon collisions produce Higgs bosons in a relatively clean environment, which allows for the reconstruction of the collisions to measure Higgs properties.

A muon collider also offers an advantage over ring-shaped electron-positron colliders such as the proposed FCC-ee at CERN. Electrons and positrons that travel in a curved path lose a lot of energy because they emit so-called synchrotron radiation. Muons, which are approximately 200 times heavier than an electron, would produce synchrotron radiation at a rate of about 1,600,000,000 times less, as power losses decrease as mass to the fourth power.

If the community chooses to build electron-positron colliders such as the International Linear Collider in Japan or the Circular Electron-Positron Collider in China, the community could build the muon collider at CERN after experiments end at the LHC, says CERN’s Daniel Schulte, who also leads the Europe-based International Muon Collider Collaboration. Alternatively, they could build the Higgs factory at CERN, followed by a muon collider, says Craig.

Craig thinks the US would make an excellent host site for the muon collider. Physicists there developed several crucial pieces of muon collider technology through the country’s Muon Accelerator Program, which ran from 2010 to 2017. The collider could also fit in the footprint of US national labs such as Fermilab in Illinois, says Craig.

“There’s been a long-standing tradition of having colliders both in Europe and the US,” says Ojalvo. “I think that there are enough people to work on both machines.”

To create a source of muons, you smash protons into a target to produce pions, which decay to produce muons. Then, to form the muons into a beam, you have to remove the particles’ motion in all directions except in the direction of the beam, known as “cooling.” The production and cooling of muons, along with their subsequent acceleration and collisions all need to occur within the particle’s mean lifetime of 2.2 microseconds.

Several technical hurdles arise from the muon’s short lifetime. One issue is developing magnets that can ramp up magnetic field quickly, so that the muons can get up to speed before they decay. Another challenge is to create a cost-effective and compact muon cooling system, says Schulte. Researchers are building upon the work of a UK-based collaboration known as the International Muon Ionization Cooling Experiment (MICE). The muons are cooled as they ionize atoms in liquid hydrogen.

In addition, researchers are studying how to extract signals from collision data. To that end, Ojalvo works on simulations of muon collisions to understand the background noise of the muon beam and its decay products. Ojalvo has found that during data analysis, they can remove a significant amount of this noise if their detector can measure the timing of collisions with the precision of tens of picoseconds, in addition to measuring the particles’ positions and energies.

And of course, there’s the matter of fundraising. With other proposed colliders’ price tags in the billions of dollars, researchers will need to make the case to their governments for a similarly expensive machine. Ojalvo is optimistic: “Whenever I talk to Congress for lobbying, you hear a lot of support for fundamental science research,” she says. She points out that these projects produce societal benefit beyond physics to educate thousands of students in science and engineering.

Schulte anticipates that the muon collider will offer a cost-effective and energy-efficient method for studying high energy physics compared to other types of colliders. While the community still needs to further develop muon collider technology, he says, “it has potential to push the field much further in the long run.”