Growing up, Carolyn “Cam” Brinkworth wanted to be part of something bigger than herself. Inspired by a love of both data and Data of Star Trek: The Next Generation, Brinkworth saw science as a crucial mechanism to advance humanity. “The value of service to a greater good was something that really spoke to me,” Brinkworth says. “Working for NASA one day was the most amazing example I could imagine of that kind of work.” With that goal in mind, Brinkworth grew up, studied physics in school, and got her PhD. At the brink of achieving traditional success as a scientist, she realized there was something missing in the scientific ecosystem: in the relentless pursuit of discovery some of the greatest minds were being ignored. So she changed course, and made it her continuing mission to make science inclusive for all.

Brinkworth is the Chief Diversity, Equity, and Inclusion (DEI) Officer at the University Corporation for Atmospheric Research (UCAR) in Boulder, where she strives to cultivate an ecosystem that celebrates each person’s worth and individual voice. A native of the UK, she received her undergrad degree in physics and astrophysics from the University of Leicester and, at first, intended to be a physics teacher. But “I didn’t feel like I was done learning,” she says, and at the last minute, she decided to go to grad school. She matriculated at the University of Southampton and began assisting her advisor in commissioning a new high-speed camera designed to measure evolution rates in binary stars.

“I thought this was the coolest thing ever,” she says. By her second year, she saw an advertisement for a 6-month internship position with the Spitzer Space Telescope at Caltech and the Jet Propulsion Laboratory (JPL) and decided to try for it. Brinkworth landed the fellowship and made the trip across the pond. “It was a breath of fresh air,” she says. “Spitzer had just launched, and everyone was buzzing with hopefulness and energy and excitement about what Spitzer was going to do.” Her PI offered her a postdoc even before she finished her PhD, “which made my defense slightly less nerve-wracking,” she jokes.

Brinkworth enjoyed the work, but there was something missing. “My postdoc was successful, I got grants. I knew I was good at it, but not the best at it. I always felt I wasn’t contributing anything unique, that anyone else could have looked at my data and written the paper,” she says. 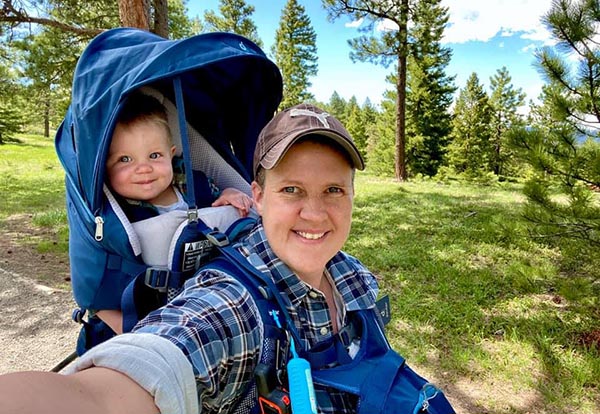 There was something gnawing at her spirit. “[My work] felt removed from people,” she says. “It felt very narrow, with not a lot of impact on human beings, and that nothing I could discover here could make a difference in human lives.” Brinkworth had always been drawn to outreach and had been active in public engagement and in leadership roles throughout her time in graduate school and in her postdoc, too. Suddenly, she realized: “The only thing that prevented me from doing more outreach was the research.”

This was a dramatic moment for her. It crystalized that her talents, curiosity, and spark were better served by positively impacting others. As her postdoc concluded, she remained at Caltech, taking a job as a staff scientist with the Infrared Processing and Analytics Center (IPAC). A year later she formally joined the education and outreach team, later transitioning to a role as the Education and Outreach Scientist for Spitzer.

“This was a dream job,” she says. “The creativity, to work with a creative team all of whom cared about the science we were doing and helping people understand it.” Brinkworth worked on various aspects of public affairs, such as writing scripts for education videos, interfacing between the press officer and scientists, and organizing public events. The whole team had free range to be creative with their outreach projects, from arranging for a fire station basement to be filled with smoke so they could demonstrate how an IR camera worked, to creating videos with celebrities like Neil Patrick Harris and Cameron Diaz. Brinkworth gained new skills, and she felt supported in a way she had not experienced before. “The director built a team based on trust and psychological safety—everything brought to the team by any member was considered,” she says. “I felt such a safe space to explore, and I was blown away by this team. He taught me how to be a good manager.”

In this nurturing environment, Brinkworth blossomed. In her nine years here, she took on a variety of projects and eventually was named Deputy Lead of Public Affairs for IPAC. But still, she wondered—what’s it all for? In the mid-2010s, a “perfect storm” of cascading events propelled her in a new direction.

In 2008, Proposition 8, a bill supporting a ban on gay marriage in the California state constitution, was passed. Although later overturned in court, it shook Brinkworth. “I’m gay, and I started to see with Prop 8 a lot of political football being played with gay kids and the rise in suicide of LGBT youth,” she says. It prompted her to get involved in the Trevor Project, a non-profit that supports LGBTQ+ kids. She gave workshops at schools on suicide prevention and LGBTQ+ issues. “This was my first experience as an activist.”

At the same time, Brinkworth craved additional scholarship and a credible qualification in education. While working for Caltech, she went back to grad school for a master’s in education with a focus on building safer spaces for LGBT+ people in STEM departments. “I took classes at Claremont Graduate University on social and racial justice, and I got more and more angry,” she says.

Emboldened to take action, in 2014, she landed a newly-created position as the Director of Diversity, Education & Outreach at the National Center for Atmospheric Research (NCAR). She and her team launched extensive training programs for the organization on gender and gender identity, bystander intervention, racism, unconscious bias, and other topics. “We felt that we skimmed this subject, so then we created another course on race and racism, including the history of NCAR and how it fits in with the system,” she says. With these initiatives, “we saw significant improvements in awareness and bystander interventions,” she says.

In 2017, Brinkworth was promoted to Chief Diversity, Equity & Inclusion Officer at UCAR, the parent organization of NCAR. The new role meant more responsibility and more potential impact. She’s especially proud of her involvement in Rising Voices, a program at UCAR-NCAR that facilitates conversations between indigenous and non-indigenous communities especially in terms of climate and weather-related topics. The efforts culminated this year in an exciting collaboration with Haskell Indian Nations University, a major tribal college in Kansas.

Brinkworth is just getting started. She is concentrating on improving demographics, ensuring workplace inclusivity, decreasing racism and sexism in science, and designing metrics to collect and mine data to improve more. The job has revealed to her how much impact she can have as an advocate for science and, more importantly, the citizens of science. “I went into science because I thought it was cool and I was fascinated to learn how the universe worked, but what I really found is that I’m fascinated by the people in science and how I can help make science better for all of us,” she says. “I think I always wanted to have impact. I have people email me years later and say, ‘you don’t remember me but here’s the impact you had.’…it’s humbling and gratifying and makes the hard days worth it.”

Adds Brinkworth: “The mission of NCAR is literally to save the planet: ‘science with and for society,’ but fulfilling that mission is impossible without a diverse workforce in an environment of inclusion, belonging, and psychological safety. I feel like I’m in the best place I can be to use my talents to serve the greater good. I want people to understand it is not only possible to be a great scientist while also being kind and inclusive, it’s necessary. Technical ability is not good enough. To be a good scientist, you have to be more than just good at science— you have to be a good human being.”