One Woman's Struggle with Harassment in Physics

Editor's note: The name of the author of this essay has been withheld at her request.

From my earliest years, I have wanted to be a researcher in science, especially physics. I worked hard at this, earning a doctorate equivalent degree in engineering with a thesis on a complex analytical system solved with numerical coding, and one in physics with an experimental thesis performed in the US. An organization soon hired me on a term contract at a very low salary. Even after obtaining tenure, my salary was always at the extreme low end of the spectrum. On the surface, all seemed to be going well with my career, but after 20 years in research, I was diagnosed with Post-Traumatic Stress Disorder (PTSD) thanks to the harassment and toxic environments I experienced along the way.

I had been tasked with establishing a research lab in a field that was new for me. I was alone in the US, without family or husband. I was logging in long hours to come up to speed and start designing specialized experimental setups. I needed to focus. Instead, in my first few months on the job, I had to face an older married colleague who was blatantly chasing me around and stalking me to friends’ houses. As much as I was trying to be kind to him, I did not reciprocate his advances and soon thereafter rumors flew around the office that I was a marriage wrecker. The head of my subdivision believed the rumors and badmouthed me from then on. 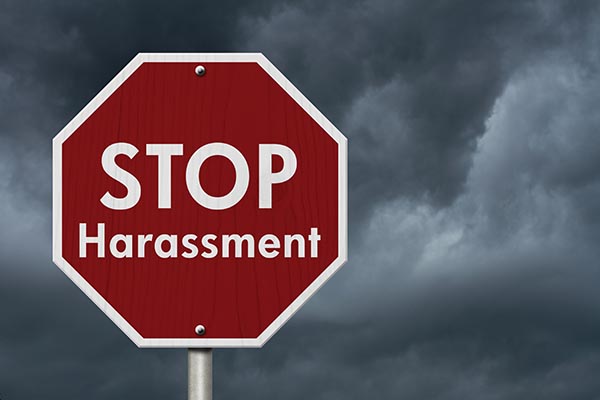 While I was dealing with that, the division head would often stop at my open office and make loud compliments of various kinds to me that everybody heard. Unfortunately, during my very first conference away, the division head dragged me out of the venue and drove us on the highway, with the pretext of calming down from some heated discussions. He left the main road, took an unpaved trail, and stopped in the middle of some vegetation. There he made some attempts at hugging and kissing me. As terrified as I was, I rejected him as politely as I could and somehow convinced him to drive back. This did not prevent him from doing the same in a limo and in my open office on a weekend.

That is when I reached the peak of my frustration and powerlessness. Going to the Human Resources (HR) department was not an option, as previous victims who had complained had been transferred somewhere else and never heard from again. On every occasion, until he finally stopped, I reiterated that I was not interested and that this whole thing was bad for everybody involved. But yet again, it was too late, as everybody was convinced that I was his lover and an opportunist. Thank God, my direct supervisor appreciated my work, and a tenure-track position was opened for me to apply. I got it thanks in part to enthusiastic letters from the community. However, I later learned that my subdivision head had thrown away half a dozen letters that had been personally addressed to him.

In the following years, while supervising graduate students, I kept adding innovative experimental setups to my lab and pioneered collaborative grants with industry. I was able to hire people and eventually was directing a group in addition to managing my lab. Nevertheless, the organization officially assigned my lab and my de-facto group to a younger male colleague. Only when he left the lab did I become an official group leader. Approaching ten years of experience, I had high-impact results, more than 150 peer-reviewed publications, had given dozens of talks, had established international collaborations, and my lab had received international recognition. Yet even after being awarded scientific prizes, the organization completely ignored me: no internal mention or honors, no initiative to propose me for external awards, no consideration for relevant internal or external committees’ membership, no promotion to roles of increased responsibility, and so on.

After expanding our research and obtaining another record achievement, instead of finally being given more responsibility, my group was transferred under a person with friends in the right places, somebody who spent most of his time trying to destroy the know-how we had systematically acquired. He fought as hard as he could against my overdue promotion, micromanaged our safety procedures, and rated me as barely “sufficient” in my performance review the year that I was elected as an APS Fellow. He attempted to blame an accident outside of my lab on my group, which was cleared after a lengthy review. When I pushed back, I received a reprimand for "inappropriate behavior."

Despite my past and present division management having done all that they could to see me leave, I will not leave. I should not be the one to leave. I have invested decades of my life in this organization, which I love, and I have established meaningful relationships with most of the people that I have worked with during the years. I take most pride from my group members, who had the courage to stand up for me when I stood up for them, the brilliant students that keep my neurons alive and dancing, and several of my kind and extraordinary collaborators. I now also have a wonderful family and children. However, when I was diagnosed with PTSD, I realized that this environment of unethical behavior had significantly affected my health. I was not born a victim and can only see myself as a warrior. I will always get back up again to take another hit. But by remaining, one engenders change. Therefore, I intend to use myself as a compelling case for positive change. I am negotiating with my institution not only to get personal reparations but also to change their antiquated HR procedures, which are still geared towards victim-blaming rather than victim protection because HR takes instructions from the division heads. I have told them that I will never stop fighting.

When the next division head was appointed, I had great hopes. After all, what could be worse than what I had already experienced? After getting rid of the aforementioned subdivision head, he surrounded himself with former students and close associates, and only cared about his own area of research. Having worked in this same area for a few years, I was looking forward to his contribution and expert advice in my work. However, when I asked for a meeting to show him our results, he barely looked at my data and immediately stated that they were junk and could not be compared in quality with those obtained by his group. As soon as I tried to ask about his criteria for quality, he threw me out of his office. My technique was later adopted by foreign industry through a collaborative agreement, and I am trying to bring it back to the US.

When that division head left, I do not recall that any opening was published, or I would have applied. Then, all of a sudden, a friend and collaborator of the former division head moved in to take the position. This individual had been tasked with paving the way for top management's associates to climb the ladder as fast as possible, and everything started revolving around this goal. This included giving one resounding title after another to each crony, proposing them for as many awards and important committees as possible, staging workshops or discussions to make them shine, and the like. This also included frequent promotion of the research results of the lab director's cronies at any opportunity, both inside and especially outside of the organization. Favored younger researchers were promoted at a much faster rate than even the best in the whole history of the organization, sometimes going from PhD graduate to senior tenured positions and division heads in a few years. Everybody else, including me, did not exist or were considered encumbrances and were passed over for any kind of recognition.

Very little attention was paid to important achievements by other groups, including mine, that served the organization’s mission. Some important breakthroughs within the core areas of the organization were completely ignored as much more scope-limited attainments of the cronies were allowed to shine without competition. This clearly had negative consequences on the funding of these other mission-related areas and most of all on the organization’s mission and reputation. During this time, a young scientist from our division committed suicide. He had often complained about working too hard compared to his rewards. In addition to such blatant favoritism causing extensive demoralization in the organization, it also made people scared to stand up during discussions. The cronies were de-facto given the authority to shame people into silence, and our organization has become one where lack of scientific debate is not only accepted but encouraged. As expected, several good scientists including numerous women left the institution.

During these struggles, the sexual harassment continued. I was approached with sexual advances both inside and outside my organization by well-established scientists who were looking for a lover. For instance, I had a disturbing groping experience with a Nobel prize winner in my cafeteria. We had met because I was hoping for his support of the scientific research that had been boycotted by my organization, but he apparently wanted something in exchange for reading my papers. Needless to say, I never heard from him again. In my experience and that of many others, harassment is not just a feature of a toxic workplace—many such cases occur at workshops and conferences by individuals in the community from other organizations. I was fortunate that in none of these events I crossed paths with violent people, and I could always escape physically unscathed. However, the negative consequences on my psyche, work, and career have compounded during my whole professional life with endless daily verbal microaggressions, both of sexual but also of non-sexual nature. This is also due to the surprising attention to superficial appearances by many scientists. I pursued the physical sciences to nourish my passion for facts and truth, hoping to have sufficient depth and skills for it. Nevertheless, even in an allegedly scientific community, I so often found myself being judged superficially.

Thanks to APS, I am not alone in my battle. By accepting me with appreciation and open arms, this Society was critical to my self-esteem. Never had I felt more inclusively accepted as a working professional. I did not need any special connections, just the willingness to participate and serve its noble mission. Under the relatively new APS ethics enterprise (see APS News, April 2021), cases like mine are heard and examined to possibly establish a future safety network for defenseless scholars of any gender and race. Ideally, the ethics initiative will accomplish this and offer solutions for all.