Both the APS March and April Meetings have a tradition of hosting events designed for the Society's early career members, with offerings from undergraduate-only speaker sessions to career coaching events. Many of these events are part of Future of Physics Days (FPD), a collaboration between APS and the Society of Physics Students (SPS) to help undergraduates get the most out of their conference experience.

The virtual 2021 March and April Meetings continued the FPD tradition, holding online workshops, graduate school fairs, and networking events for students, most of whom may have been experiencing an APS meeting for the first time. With over 800 undergraduate student attendees across the March and April Meetings, FPD included events with innovative new formats to help students connect to the broader physics community.

A highlight of both meetings was a brand-new event called Physics Crossing, which used a video-game-style virtual world in the online platform Gather.Town to facilitate networking, tours of physics facilities, and bonding between student attendees. As each attendee entered the virtual space, they were able to move an avatar around to speak to others in the area, as well as enter into specially designed spaces, thanks to national labs and companies who sponsored “tours” of their facilities. Within each tour, students could explore the physics that takes place at each facility and chat with representatives from each institution. 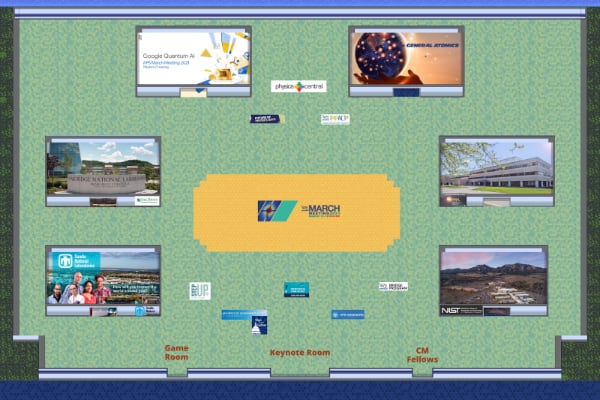 “We wanted to plan something fun and interactive to make networking easier—it can be challenging for students to network virtually online,” said Midhat Farooq, APS Careers Program Manager. “Having tours in place with staff within the tours provided easy opportunities to start conversations. It made networking more feasible.”

To help guide students through the Physics Crossing space, attendees also participated in a scavenger hunt for prizes, hunting down clues within facility tours, chatting with facility representatives, or browsing booths on APS Programs. All scavenger hunters received gift cards to the APS store.

“One student said this was the first time they had done a scavenger hunt and really had a lot of fun,” said Farooq. “An institution representative commented on the great quality of interactions while another recruited two student interns at the event.”

Another particularly useful program for undergraduate attendees who were presenting, either in the special undergraduate speaker sessions or a poster session, featured APS Career Mentoring Fellows providing feedback on every presentation. The Career Mentoring Fellows program enlists physicists working in industry, government, or academia who are interested in mentoring undergraduate students and teaching about diverse career paths available to physicists. By having the Fellows provide feedback on student presentations, it provided much-needed connection between undergraduates and the larger physics community, even at a virtual meeting.

“It might be the first time a student is attending one of these meetings…it’s an intimidating experience,” said Farooq. “With FPD, we aim to provide a welcoming and supportive environment. It’s all exacerbated in a virtual world—if you don’t know many other attendees it’s ever more jarring to attend a virtual conference. Having some human contact, knowing that someone viewed your presentation and feedback can mean a lot.”