Since 2015, the APS Division of Chemical Physics (DCP) has had a doctoral dissertation award given annually to a young researcher with the best PhD thesis in the field. The name of the award was changed shortly after its inauguration to honor Justin Jankunas, a brilliant and accomplished scientist who died in a motorcycle accident. But the Division had a problem: funding for the award was mostly coming in small donations, not enough to fully endow the prize and make it self-sustaining. The solution: baseballs.

"The way this works at APS is you can start an award like this and initially pay for it out of Division funds," said David Chandler (Sandia National Laboratories), who was chair of DCP at the time. "But then you have to endow the award so that it is self-sustaining. People liked the idea, and we were confident we could raise the money, but it turned out to be a lot harder than we thought."

Jankunas finished his doctorate in chemistry from Stanford in 2013 and joined Sandia following postdoctoral work at the École polytechnique fédérale de Lausanne (EPFL), in Lausanne, Switzerland. His thesis advisor, Richard Zare, made an initial large contribution to the award fund.

“He was a wizard in the laboratory working indefatigably on understanding in detail the simplest of all chemical reactions, H + D2 → HD + H, " wrote Zare. "He went way beyond the call of duty to provide teaching support to a number of courses, being a teaching assistant in 10 different courses … When he graduated he received the Linus Pauling teaching award from my Department as well as an award given to the top physical chemistry PhD.”

Chandler and other members of the DCP executive committee wrote letters asking for contributions, but the fundraising stalled about halfway to the $50,000 endowment goal. "I wrote to anybody associated with DCP over the last 20 or 30 years, but that didn't raise nearly enough to get us over the finish line." 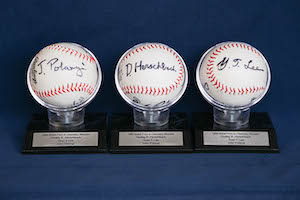 "My dad ran an antique shop in Texas many years ago," explained Chandler. "And somehow he came across a baseball autographed by Nobel laureate Linus Pauling. He bought it from someone's estate and gave it to me. I thought, well, I know Yuan Lee and Dudley Herschbach, and once I met John Polanyi [the three winners of the 1986 Nobel prize in chemistry], maybe I could get baseballs autographed by them."

As it turned out, Lee and Herschbach were baseball fans and Polanyi was happy to help as well. "You could say that these three laureates are most closely associate with chemical physics in terms of its topical area. For people in chemical physics, this is a really meaningful gift," added Osborn. "Three dozen baseballs were signed by the Nobelists in December 2020. The first ones were sent to donors and now we have about five left, which we hope will garner five more gifts from the community to the endowment. This is what kicked us over the top in terms of fundraising." The endowment campaign reached its goal in March 2021.

“This is a perfect example of how creativity and dedication toward reaching a fundraising goal can make a difference in honoring the legacy of a promising young chemical physicist while supporting the careers of other promising chemical physicists,” said Kevin Kase, APS Director of Development.