The ultralight, porous, synthetic materials known as aerogels are 99.8 percent air, earning them the nickname “frozen smoke.” Until 2012, silica aerogel held the Guinness World Record for lowest-density solid. Their unusual properties make them ideal for a variety of scientific and industrial applications, such as experiments to capture cosmic dust in space, as thermal insulation on NASA’s Mars rovers, and as radiators in certain particle detectors. The man who first created them was a chemist named Samuel Kistler.

Born in 1900 in the small cattle town of Cedarville, California, Kistler’s father was a shopkeeper. Young Sam dreamed of breaking wild horses and being a cowboy, but when he was 12, his father sold his store and the family moved to Santa Rosa. In high school, he fell in love with chemistry, taking extra college classes in the subject in addition to his high school curricula.

When he first started at the College of the Pacific in 1917, Kistler hoped to learn the cello, and eventually earn an agricultural degree. Those plans changed three years later, when he transferred to Stanford to complete his bachelor's degree in chemistry. After graduating, he went to work at Standard Oil Company in California, returning to the College of the Pacific a year later to teach chemistry. Apart from one year abroad, he stayed there until 1931, when he moved to the University of Illinois.

It’s not clear exactly when Kistler succeeded in making his first aerogel, or even where: The College of the Pacific, which had limited experimental facilities, or Stanford, where Kistler earned his PhD. His master’s thesis was on the crystallization of amino acids from supercritical fluids, and he published several papers in the late 1920s on using wet gels as ultra-filters. 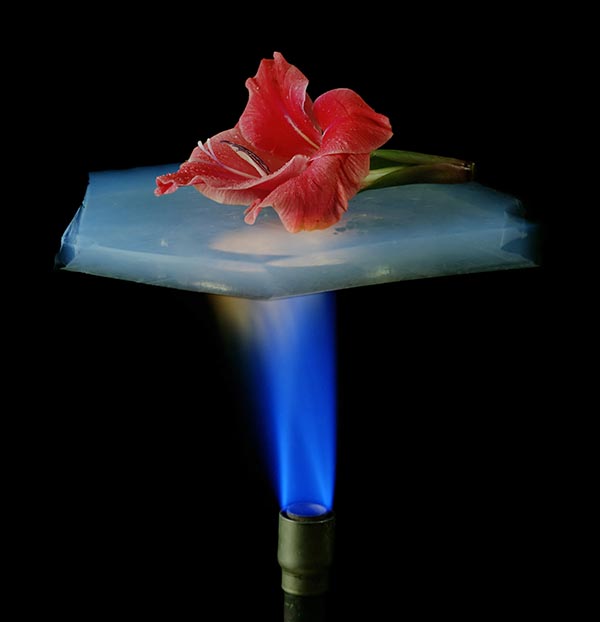 A flower suspended over a flame is thermally protected by a piece of aerogel.

Legend has it that he was originally inspired by a bet with a fellow scientist named Charles Learned over whether it was possible to replace the liquid inside a jelly jar without causing shrinkage. We do know that aerogels were the focus of his research by the time he got to Illinois, and that Kistler published the results of his aerogel experiments in a May 16, 1931, paper in Nature. He used a process known as supercritical drying to make them, forcing the liquid into a supercritical fluid state by increasing the temperature and pressure. He then reduced the pressure, which vaporized and removed the liquid inside, leaving just the porous solid in place.

Yet aerogels were largely forgotten for the next three decades. The process to make them was laborious and expensive, as well as potentially explosive. It also required toxic compounds. As for their properties, aerogels were cloudy rather than transparent, and while they showed good thermal resistance, it wasn’t quite good enough in early aerogels for commercialization purposes.

So Kistler moved on, leaving the University of Illinois in 1935, first working at Norton Company to research abrasive grinding compounds, moving up to become director of research. Most of his patents date from period. He was also part of the company’s effort to synthesize diamonds, although Norton passed on commercializing the breakthrough, persuading General Electric to do so instead. Kistler also invented a scratch-resistant polymer for eyeglasses.

Kistler worked with Monsanto in the early 1940s to develop silica aerogel products for use as flattening agents in paints and varnishes; as a thickening agent in the jelly used to make napalm bombs and salves for sheep; and as an ingredient to make silicone rubber. Perhaps because it was so expensive to make, and increased competition from other silica and thermal insulation products, the company discontinued its Santocel line of products around 1970.

Kistler moved to the University of Utah in 1952 to become dean of engineering, where he continued to teach and conduct research until he retired. He was a strong advocate for scientific education and its importance to society. “Recognize that technology has no morals,” he told graduating engineers in 1965. “It serves evil as efficiently as it serves good. Upon you, therefore, rests the responsibility for moral and ethical use of technology.”

He died on November 6, 1975, in Salt Lake City, just before aerogels experienced a resurgence of interest, thanks to the development of a safer, more efficient manufacturing method by French scientists in the 1980.

Aerogels continue to fascinate scientists as a material. For instance, in 2018, researchers at Newcastle University in the UK created a new type of aerogel inspired by dragonfly wings, which have the same porous, layered structure of an aerogel. When dragonflies emerge from the larval stage, their wings are wet and gel-like, but the insects produce bicarbonate molecules which release CO2, blowing out all the moisture. The Newcastle team figured out how to mimic this process using bicarbonate of soda, instead of using high temperatures and pressures to dry the silica.