The history of science is rife with serendipitous discoveries that can profoundly impact our daily lives. That includes the discovery of a novel polymer, later trademarked as Teflon, by an American scientist named Roy J. Plunkett.

Born in Ohio in 1910, Plunkett grew up in poverty and attended Manchester College in Indiana, where his roommate was future Nobel laureate Paul Flory (honored for his contributions to the theory of polymers). Like Flory, Plunkett went on to earn his PhD from Ohio State University. His thesis was on the mechanism of carbohydrate oxidation. In 1936, after receiving his doctorate, he joined E.I. du Pont de Nemours and Company (now known as DuPont) as a research scientist, where he worked for the rest of his career.

Plunkett’s early research at DuPont’s Jackson Laboratory in New Jersey involved developing new chlorofluorocarbon refrigerants—preferably something non-toxic and non-flammable to replace less-desirable refrigerants like sulfur dioxide and ammonia. He was experimenting with tetrafluoroethylene (TFE) gas, stored in 1 kg canisters at temperatures conducive to dry ice until they were ready to be chlorinated for the experiments. 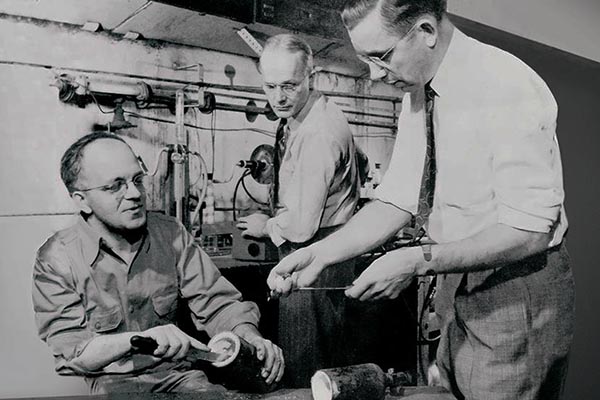 On the morning of April 6, 1938, Plunkett asked his research assistant, Jack Rebok, to set up their experimental apparatus with one of the TFE cylinders used the day before. Typically, when a canister’s valve was opened, the gas would flow out under its own pressure. But this time, nothing happened. Yet the weight of the canister had not changed. Realizing that there simply wasn’t any gas left in the cylinder, a puzzled Plunkett tipped it upside down, and a white-ish powder fell onto the lab bench.

“We scraped around some with [a] wire inside the cylinder… to get some more of the powder,” he later recalled. “What I got out that way certainly didn’t add up, so I knew there must be more inside.” Eventually the two men decided to cut open the cylinder and found even more of the powder packed into the bottom and lower sides.

Plunkett often told audiences that his education and training had prepared him to recognize novelty. He realized that the TFE gas had polymerized—something not predicted by prevailing theory at the time— into a waxy solid known as polytetrafluoroethylene (PTFE), with the iron surface inside the container acting as a catalyst. While he initially considered the experiment a failure, PTFE proved to have some remarkable properties. It was corrosion- and high-heat-resistant, for instance, and had very low surface friction.

“He recognized almost at once that the material was different and that it had potential and DuPont saw it too,” Plunkett’s wife, Lois, told The New York Times in 1994.

It fell to other chemists and engineers to find a good use for PTFE, which was initially extremely expensive to produce and could not easily be shaped. The first application was on the Manhattan Project, where its corrosion resistance properties proved useful as a coating on valves and seals in the pipes holding highly reactive uranium hexafluoride at the uranium enrichment plant in Oak Ridge, Tennessee.

The Teflon trademark was registered in 1945 by Kinetic Chemicals, a DuPont partnership with General Motors, and was soon producing more than two million pounds of the branded PTFE each year. By the 1950s, scientists had invented copolymers that kept most of the desirable chemical and mechanical properties of PTFE, yet were more easily molded or extruded, thereby opening up more practical applications. All this, in a field that had been considered mature and relatively uninteresting scientifically.

In 1954, French engineer Marc Grigoire invented the first PTFE-coated nonstick cooking pans (brand name: Tefal) at the suggestion of his wife. The first nonstick cookware appeared in the US in 1961, introduced by Marion A. Trozzolo, who had noted its usefulness for his scientific tools. Hundreds of manufacturers all over the world now offer some version of nonstick cookware.

Today, Teflon is used in a wide range of industrial applications: in windshield wipers; as a stain repellant in carpets, furniture and clothing; in lightbulbs; in glass coatings; and even in certain hair products. In the medical sphere, it is used as a graft material in surgeries and as a coating on catheters, since it keeps bacteria and other infectious agents off the surface. Teflon is also a common ingredient in weather-resistant paints.

The city of Philadelphia awarded Plunkett the John Scott Medal in 1951 to honor an invention that contributed to the “comfort, welfare, and happiness of human kind.” Those who attended the ceremony even received complimentary Teflon-coated muffin tins. He was also inducted into the National Inventors Hall of Fame in 1985.

Plunkett went on to head up production of the gasoline additive tetraethyl lead, as well as freon production, before his retirement in 1975. Eventually he was diagnosed with cancer and died on May 12, 1994, at home in Texas. He was 83.