The APS Division of Particles and Fields

With over 2,600 members, the APS Division of Particles and Fields (DPF) is a home for physicists interested in fundamental particles and fields, their structure, and their interactions and interrelationships, as well as the design and development of high energy accelerators and other instrumentation for high energy physics.

This area of research spans the very small to the very large. As DPF chair Tao Han (University of Pittsburgh) put it, “we study the smallest building blocks of the universe and their interactions. This has a fundamental connection with early universe cosmology and the Big Bang.”

Ongoing research in the physics of particles and fields is advancing on three major frontiers: the energy frontier, the intensity frontier, and the cosmic frontier. The energy frontier involves the use of particle accelerators to explore high-energy subatomic collisions. Such collisions produce phenomena not seen since the immediate aftermath of the Big Bang, thereby providing clues about topics ranging from the origin of mass to the existence of other dimensions.

The intensity frontier involves the use of accelerators to study more rare and subtle phenomena, in particular, neutrinos—electrically neutral particles that are among the most abundant particles in the universe, yet very difficult to detect because they almost never interact with other matter. Measuring the mass and other properties of neutrinos has critical implications for understanding matter/antimatter asymmetry and the origin of the universe.

Finally, the cosmic frontier is centered on the study of visible matter, as well as the dark matter, and dark energy that constitute 95% of the universe, using a combination of accelerator experiments, telescopes, and other astronomical observations. 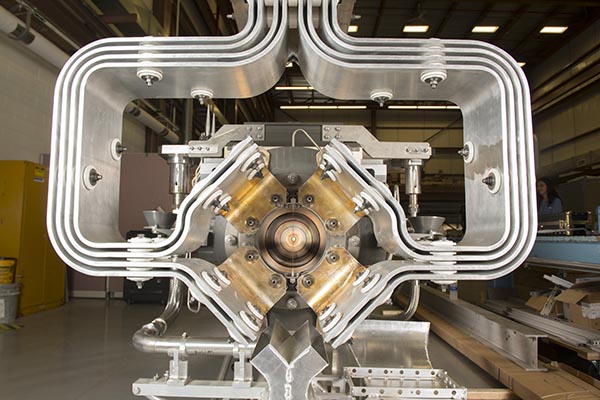 A neutrino horn capable of handling one megawatt of particle beam is prepared at Fermilab in advance of the Deep Underground Neutrino Experiment. Neutrino physics is one of many areas of interest to members of DPF.

In addition to this international recognition of the field, another point of pride for DPF is its commanding presence at the APS April Meeting, where it sponsors a mix of dedicated sessions on particles and beams as well as joint sessions in partnership with other APS units such as the Divisions of Astrophysics (DAP), Nuclear Physics (DNP; see APS News January 2021), Gravitational Physics (DGRAV), and Physics of Beams (DPB), encouraging cross-talk and collaboration between these closely related branches of physics.

This year’s April Meeting is scheduled for April 17-20 in a social distancing-friendly virtual format. The agenda is headlined by three plenary sessions: “Science on a Global Scale,” “Advancing an Inclusive Community in Science,” and the Kavli Foundation Keynote, which will feature the three 2020 Nobel laureates in physics.

Additionally, DPF is sponsoring or co-sponsoring four focus sessions on topics including conceptualizations of future muon collider facilities, precision measurements with leptons, and quantum sensors and computing, as well as 14 invited sessions, including talks detailing the latest results from the CERN Large Hadron Collider, recent advances in theoretical physics, new frontiers in dark matter research, and presentations of the division’s 10 annual awards.

The years 2020–2022 mark an especially important period for DPF with the organization of the division’s decadal study, the Particle Physics Community Planning Exercise. Also called “Snowmass” after the typical site of the gathering in Snowmass, Colorado, this study provides an opportunity for the particle physics community to come together to identify and document a scientific vision for the next decade of research in the field of particles and beams in the US and abroad. Subsequently, the Particle Physics Project Prioritization Panel (“P5”) uses the input from Snowmass to define a 10-year strategic plan for particle physics research in the US. This also involves identifying top priorities for the US Department of Energy and the National Science Foundation, two of the biggest funders of particle physics research. This kind of planning is essential for particle physics in particular, with its reliance on shared equipment and projects that can last several years to decades.

Because of the COVID-19 pandemic, this year’s community summer study meeting will be postponed until summer 2022, to be held at the University of Washington’s Seattle campus, with many working groups also holding satellite virtual meetings.

Looking inward, the DPF executive committee has two major goals for the division. First, to continue to advance the field of particle physics, and second, to engage the research community—particularly the next generation of young scientists. To this end, DPF has no shortage of opportunities for peer support, collaboration, and inspiring mentors.

Overall, DPF stands out as a powerhouse within APS, promoting research, global collaboration, and exchange of ideas at the forefront of one of the most high-profile areas of physics. More information on this unit can be found on the DPF website.

The author is a freelance writer based in Stockholm, Sweden.