A former high school physics teacher, Matsler first learned about quantum technology through a workshop in 2012 at the Perimeter Institute in Canada. “I was blown away,” she remembers when taking a tour of the labs at the affiliated Institute of Quantum Computing.

Matsler became convinced that students needed a better grasp on quantum concepts earlier in their lives. Since that workshop, Matsler, who trains future secondary school physics teachers as a professor at the University of Texas at Arlington, has become an advocate for more quantum curriculum in secondary education. In 2016, with funding from APS, she organized a camp in Texas for teachers to learn and practice teaching quantum mechanics. She has also facilitated conversations between policymakers and teachers to add quantum mechanics content to Texas’s state science standards. 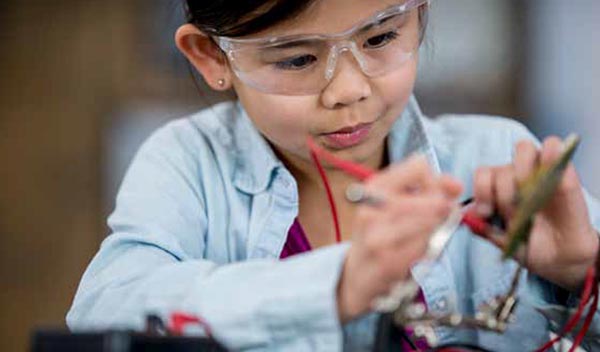 “Kids are fascinated by quantum science. They love it, and they want to learn it,” says Matsler, who has taught students spanning seventh through twelfth grade. “But the teachers are scared to death of it.”

As quantum technology tries to break into the mainstream, it struggles to break from intimidating, esoteric roots. “I find the resistance is from people who are just scared of the word ‘quantum,’” says Matsler. “Seriously, if you use a different word, they're okay with it. It’s almost like a four-letter word.”

QIS is an interdisciplinary field at the intersection of physics, computer science, math, and other physical sciences. As described in a workshop that inspired the partnership’s creation, QIS “exploits quantum principles to transform how information is acquired, encoded, manipulated, and applied,” and its applications encompass quantum computing, quantum communication, and quantum sensing.

“There is a workforce shortage in the United States and globally, for quantum talent,” says Corey Stambaugh of the White House Office of Science and Technology Policy (OSTP), who has been involved with the initiative since its inception.

By expanding the quantum curriculum to middle and high school students in the US, the initiative’s partners aim to train a new generation to work in the growing quantum industry. These school years are pivotal to a student’s academic trajectory. “There's a lot of data out there that suggests that as early as middle school, students are turned away from STEM,” says Stambaugh.

In addition, college students choose their major based on their secondary school experiences, says Matsler. “Somewhere along the line, a teacher sparked that interest or asked the right questions, or provided some type of support,” she says.

OSTP and the National Science Foundation announced the National Q-12 Education Partnership on August 5, 2020. At a kick-off event on October 7, various partners discussed their goals for the 10-year initiative.

Q-12 itself does not fund educational programs, acting instead as a network for the various players in quantum technology. “The whole partnership is about building a community,” says Stambaugh.

APS is contributing outreach and career resources. For example, they are working to highlight individual career stories, to help people understand what a quantum career can look like, says Crystal Bailey, APS’s Head of Career Programs. In addition, APS is producing an educational kit on quantum information science a part of its annual PhysicsQuest program. This kit will be freely available to schools, home school groups, science clubs, and after-school programs.

The partnership also wants to help make the quantum industry more inclusive. “QIS draws on some of the least diverse fields—physics, computer science, math, electrical engineering,” says Emily Edwards of the University of Illinois at Urbana-Champaign, a co-principal investigator of Q-12.

These fields have long been stereotyped as white and male, which has deterred students of other demographics from participation. “It would be very easy for that stereotype to take hold given the fields that go into it,” says Diana Franklin of the University of Chicago, the other co-PI of Q-12. “I think we have a chance to make sure the stereotype doesn't take hold.”

To this end, Q-12 is helping its partners create video profiles of a diverse range of people working on quantum technologies, says Franklin. They also plan to support efforts to recruit more Black students into QIS, such as IBM’s partnership with Howard University, announced in 2020.

Similar to classical mechanics curricula that don’t use calculus, they are striving toward quantum curricula that require only high school-level math. “Most physics textbooks [require] linear algebra and proofs,” says Franklin. But the mathematical formalism really isn’t necessary to introduce students to quantum concepts, she says. “It’s really interesting how far you can go only using algebra and matrix multiplication,” says Franklin.

The partnership has their work cut out for them. While a handful of teachers have begun to experiment with quantum curricula, Q-12 has to develop materials almost completely from scratch, with teachers’ practical classroom challenges in mind. “If you try to add new content to what teachers are doing, they're going to balk, because they've already got enough on their plate,” says Matsler. To make it easier for teachers to get on board, she says the key is to weave quantum concepts into the existing curriculum structure. For example, teachers can explain Heisenberg’s uncertainty principle in their existing lessons about momentum. They also must keep in mind that many middle and high school teachers are generalists, says Matsler. According to a 2011 U.S. Department of Education survey, only 47% of physics classes are taught by a teacher with a degree in the subject.

While the effort will take years, Edwards envisions a future of broader quantum literacy. “If quantum is introduced at an early age, then we can explore other topics, beyond ‘What is a qubit?’, and have a deeper conversation about the science,” she says.

The author is a freelance science writer based in Columbus, Ohio.