The APS Division of Nuclear Physics

With over 2,600 members, the Division of Nuclear Physics (DNP) is a home for physicists who study how matter in the universe evolved, the current matter composition of the universe, and the properties of nuclei that exist in both chemical elements and stars.

“Nuclear physics topics can be viewed as five vibrant and interconnected subfields,” according to DNP chair Krishna Kumar (UMass Amherst). Broadly, these include the structure of nuclei, nuclear astrophysics, the structure of protons and neutrons (so-called “cold quantum chromodynamics"), the study of quarks and gluons at high temperature (so-called “hot quantum chromodynamics"), and the study of the fundamental nuclear forces and their role in the evolution of the early universe.

This is an especially busy time in the world of nuclear physics given the construction of two major new accelerator facilities: the Facility for Rare Isotope Beams (FRIB) at Michigan State University and the Electron-Ion Collider (EIC) at Brookhaven National Lab. Slated to start operations as soon as 2022, FRIB will provide intense beams of rare isotopes (that is, short-lived atomic nuclei not normally found on Earth) that will allow further study into nuclear structure, the origins of elements, and the forces that shaped the development of the universe in the moments after the Big Bang. 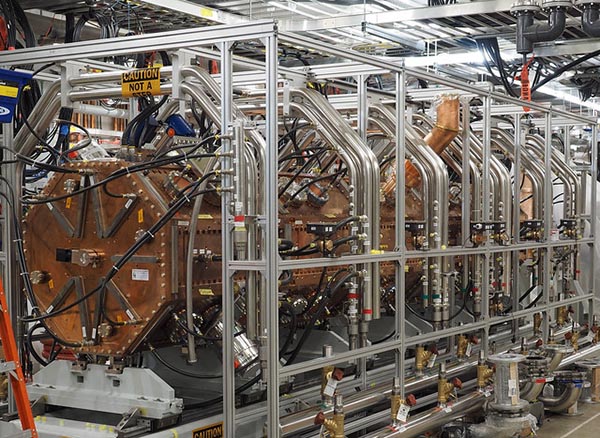 Nuclear physicists will be busy in coming years as new instruments like the Facility for Rare Isotope Beams at Michigan State University (pictured) come online.

Groundbreaking for the construction of EIC—a 2.4-mile-circumference particle collider—occurred last September. This facility will be uniquely positioned to address important questions about nucleons (that is, neutrons and protons), including how mass and spin arise and the possible emergent properties of dense systems of gluons. “It is a very exciting time,” noted DNP vice-chair Vickie Greene (Vanderbilt), “Things really come alive when these new machines come online.”

A particular point of pride for DNP is its long-running, mid-October Annual Meeting. This meeting showcases the latest developments in all the subfields of nuclear physics, with an emphasis on new experimental results and notable theoretical developments. Besides a large selection of invited and contributed talks from across the spectrum of nuclear physics, the meeting also includes a selection of topical workshops, a popular Women in Science Social, a town hall meeting where DNP members can express their concerns and opinions, and multiple poster sessions.

Kumar explained that an important emphasis at this meeting is engaging DNP’s newest members and providing a platform for undergraduates and graduate students to delve deeper into the field. Indeed, the DNP Annual Meeting is an important rite of passage for many nuclear physicists. “If you’re a nuclear physicist in training, your first presentation will likely be at the Divisional Meeting,” noted Greene. “This exposure is very important for young people.”

Despite the change to a virtual format, DNP’s 2020 Annual Meeting was a resounding success, drawing 1,400 people—nearly double its normal attendance on the order of 700 to 900. This was mainly driven by increased engagement from young scientists and scientists from abroad.

“This was our first fully online meeting, and our focus was on ensuring that the membership was able to get the same exposure to the state of research in a wide variety of topics as in an in-person meeting,” explained Kumar. “The feedback from the membership has been very positive.”

“From the perspective of internationalism, it was a huge success,” added Greene. “I’m hoping that we can maintain a virtual component in future meetings to maintain the international participation. There is very good science being done all over the world, and we don’t often have the opportunity to hear about this outside of big meetings.”

DNP is also very active at the APS April Meeting, where it sponsors a mix of dedicated sessions on nuclear physics as well as joint sessions partnered with APS units such as the Divisions of Gravitational Physics (DGRAV), Astrophysics (DAP), and Particles and Fields (DPF)—encouraging cross-talk and collaboration among these closely related branches of physics.

Looking to the future, the DNP executive committee’s goals are many. “Coming into a leadership role, my primary focus was to further cement what I see as DNP’s greatest strength, which is to bring together broad swaths of researchers and applied physics practitioners who are interested in a deeper understanding of in the inner workings of the universe over the entire range of observable length scales—from subatomic to intergalactic,” explained Kumar. Since the onset of the COVID-19 pandemic, this emphasis has extended to ensuring that DNP members are able to communicate and network with the same pace and intensity as before, despite pandemic-related restrictions.

Complementing this, Greene underscored the importance of promoting the participation of women and under-represented minorities in the nuclear physics community. “It’s still the case in physics that participation on the part of women is only about 20%,” she explained, “And at the professor level it falls to about 8%.” DNP in particular is composed of about 15% women, placing it among the top five APS divisions for gender diversity, but with room for growth.

An important action the division has taken to this end is the establishment of the DNP Allies Program, an intervention to ensure that conferences are as inclusive and as comfortable for people as possible and to reduce the impact harassment (whether intended or unintended) may have on the field of nuclear physics. The program trains “allies” from the nuclear physics community to help people who may feel harassed. Wearing bright orange scarves or armbands, allies are easily identifiable at the DNP Annual Meeting and are on alert for anyone who may be feeling uncomfortable and available to talk and provide guidance to meeting participants who have experienced harassment. “There is still so much work to do around representation,” noted Greene, “Especially for a younger person in nuclear physics, it doesn’t take many negative comments before they can get discouraged about the field as a whole.”

Greene also highlighted increased public outreach about the exciting advances in nuclear physics as a goal for DNP. “Taxpayers are funding much of this research, and they should get some fun out of it,” she pointed out.

Overall, with a well-deserved reputation, DNP stands out as a cornerstone of research and innovation at APS. “Science isn’t something that happens in a vacuum,” Greene explained. “It takes place in the context of a community, and DNP represents that community.” According to Kumar, “Any APS member who has a keen interest in the physical universe and the problems, challenges and techniques that are employed and further developed to advance our fundamental understanding of its fundamental constituents, evolution and observed properties would profit from engagement within our vibrant membership.”

More information on this unit can be found on the DNP website.