Robert L. Park, founder of the APS Office of Government Affairs, University of Maryland (UMD) professor, and relentless defender of scientific decision-making, died on April 29, 2020. He was 89.

Park came to APS in 1983 to open an office in Washington, DC, dividing his time between UMD and his work at APS. He was originally asked to report to the APS Board on what was happening in Washington regarding science policy, and while he was not engaged in today’s version of science advocacy work, Park was a strong voice for science. His report-out to the APS Board evolved into a widely read (in Washington and elsewhere) publication titled What’s New, a weekly one-page summary of policy news, peppered with Park’s honest, unapologetic, and often hilarious commentary.

In his weekly chronicles of policymaking in DC, Park earned a reputation as a staunch advocate for using science—and common sense—to direct policy, and as an adversary for would-be peddlers of pseudoscience. Politicians, policy-makers, and quacks alike were held accountable on topics from manned missions to Mars to false claims of perpetual motion machines. Often on topics like missile defense, Park consulted General Persiflage and Puff Panegyric—his fictional sources at the Missile Defense Agency—to bring a humorous note to his sharp commentary. 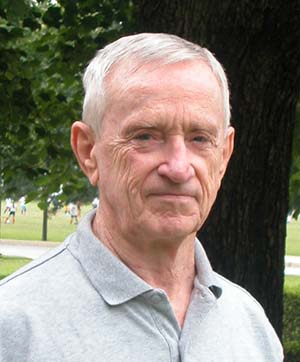 “I think everybody who read What's New had to confront the truth of the science. Regardless of what the political issue was, [Park] was making it clear to all his readers what common sense has to say about the issue. And then we'd all have to confront that in our own way,” said Francis Slakey, Chief External Affairs Officer at APS. “He brought some common-sense perspective to all the lobbyists in Washington. He had such an enormous readership in DC that I'd say it forced all of his readers to reflect on what the science was telling us about the issues.”

Park’s no-nonsense approach to science-based decision making brought him many fans, among them APS President Phil Bucksbaum, but also a number of detractors, who Park again managed with humor.

“Like many APS members, I was a devoted fan of Bob Park’s weekly What’s New column, with its irreverent wit about Washington, pseudoscience, and anything on his mind that fit his own description, [summarized as] ‘Opinions are the author's and are not necessarily shared by the APS, but they should be,’” said Bucksbaum. “The column had a progressive bent, to say the least, and so it also had some detractors. I once saw Bob during the time that he was recovering from an injury from a tree falling on him. Bob was laid up for many months but had finally got to the point where he could attend our meeting of the Physics Today Advisory Committee. Bob thanked us for all the get-well wishes. He also said that he received a few notes from his column’s detractors about how the tree was God’s punishment. We were kind of shocked, but Bob followed up with a twinkle in his eye, ‘You know, I cherished those comments.’”

Bucksbaum adds, “Bob’s greater legacy was to give APS members a voice on public policy. As APS Director of Public Information, he established our Washington Office. This has become one of the most important services that we perform for our members, and for the field of physics.”

Park, who was born in Kansas City, Missouri, decided to pursue a career in physics after serving as an electronics officer in the Air Force during the Korean War. He attended the University of Texas, receiving a BS in Physics with High Honors in 1958 and a MA in Physics in 1960. He then attended Brown University as an Edgar Lewis Marston Fellow, earning his PhD in 1964. For the next decade, he worked at Sandia National Laboratories until 1974, when he became a professor at UMD. From 1978 to 1982, Park served as Chair of the Department of Physics at UMD before joining APS to launch its Washington office. He stepped down as the Director of Public Information for APS in 2006 and retired from UMD in 2008. He was followed as Director by Michael Lubell, Professor of Physics at the City University of New York.

Park received the 1998 Joseph A. Burton Award from APS for informing the public about physics and the 2008 Philip J. Klass Award of the National Capital Skeptics for promoting critical thinking. He was also a Fellow of APS, the American Association for the Advancement of Science, and the American Vacuum Society.

In addition to his weekly production of What’s New, Park also wrote two books, Voodoo Science: the Road from Foolishness to Fraud published in 2000 and Superstition: Belief in the Age of Science published in 2008. Voodoo Science has been translated into nine languages, broadening the reach of Park’s mission to promote science-based decision making. He also contributed features to The New York Times, The Washington Post, and US News and World Report.

“The topics [Park] would write about in What’s New are the topics he wrote about in Voodoo Science. He was trying to bring common sense, science-based decision making to the public,” said Slakey. “Don’t be fooled by homeopathy, don’t be fooled by that perpetual motion scam… the things he was writing about were things that try to use science to pretend that they’re legitimate, but if you follow the science, you’d end up drawing a reverse conclusion.”

Peter Zimmerman, Emeritus Professor of Science and Security at King’s College, London, and Park met through the APS Panel on Public Affairs, before both moved to Washington and ended up with an opportunity to work closely together—Park, as the Public Affairs Officer for APS, and Zimmerman as Chief Scientist at the US Arms Control and Disarmament Agency.

“Bob was a great goad to all kinds of physicists to get involved and be involved, he was just absolutely hell on wheels against fraud in science, any kind of fraud or fakery,” said Zimmerman. “That was fine because I felt very much the same way.”

Park and Zimmerman disagreed on some finer points of science policy, such as manned space flight—which Park was opposed to—but they agreed on the importance of promoting science, especially physics.

“His biggest contribution was the Washington office of APS—having the idea, getting it set up and running it so long,” said Zimmerman. “He was very effective on the Hill keeping people aware of physics and generating support for science and physics in particular—support that was political, societal, and in the only currency that counts—money. He was excellent at defending the interests of physics.”

Over two decades with APS, Park helped develop the Washington Office from his one-man operation to a full-fledged, six-person professional advocacy office. But even as the office made a pivot towards direct engagement with Capitol Hill, a move that brought Slakey into the office, Park continued publishing What’s New weekly, without fail.

“Bob realized he was saying something that people really wanted to hear. And so he turned it into this public newsletter that anybody could subscribe to. And then he came up with this formula, which is he's going to report it out every Friday afternoon, holidays be damned,” said Slakey. “It wouldn't matter if it was New Year's Day or Christmas Day, he put that thing out, and he did it 52 times a year without fail. And, then typically by the time Monday morning rolled around, there'd be people in town talking about the wise cracks that he had put into it. If nothing else, he found a way to make discussions of science and policy entertaining and a must read.”

After leaving APS in 2006, Park continued writing What’s New as a blog until 2012, continuing his unwavering commitment to science, regardless of outside critiques and criticisms.

“He would say things, whether they were unpopular or unconventional, it didn’t matter. If that’s where the science took him, that’s what he was going to say,” said Slakey. “That’s why he would take a position. And he did this on issue after issue after issue—he never let politics interfere with his judgement, he let the science take him where it would.”