The APS Division of Laser Science

With 1,250 members, the Division of Laser Science (DLS) is a home for physicists engaged in research and development of new lasers and associated laser technologies. This encompasses the physics of lasers, light propagation and control, and the development of advanced lasers, single photon light sources , as well as wide-ranging new applications of lasers and laser light.

Beyond this, DLS chair Rick Averitt (UCSD) noted that DLS welcomes “all researchers who use lasers in any way, shape, or form in their research.” This is quite a large group: Lasers are ubiquitous in numerous areas of research inside and outside physics, including but not limited to metrology, metamaterials, optical microscopy and nanoscopy, control of light in complex systems, the use of light for complex control, quantum materials, vibrational dynamics in molecules and biological materials, and quantum computing, computing, and sensing.

Laser science also has wide-ranging practical applications. In medicine, lasers are a key component in cancer diagnosis and therapy and are frequently used for eye and other soft tissue surgeries. Lasers are also fundamental to modern biomedical imaging: The advent of super-resolved fluorescence microscopy has opened a new world of visualizing the molecules of life. In industry, lasers are used to cut, weld, and engrave hard materials, and have enabled 3-D printing and scanning. In information technology, lasers form the basis of photolithography for modern semiconductor manufacturing and are fundamental to the fiber-optic devices that have ushered in modern communications and the Internet.

Researchers in laser science are themselves as diversified as this array of topics—pursuing both experimental and applied work and spanning academia, industry, and national labs.

A particular point of pride for DLS is its involvement in two major conferences on laser science: CLEO (Conference on Lasers and Electro-Optics) and the Laser Science conference. 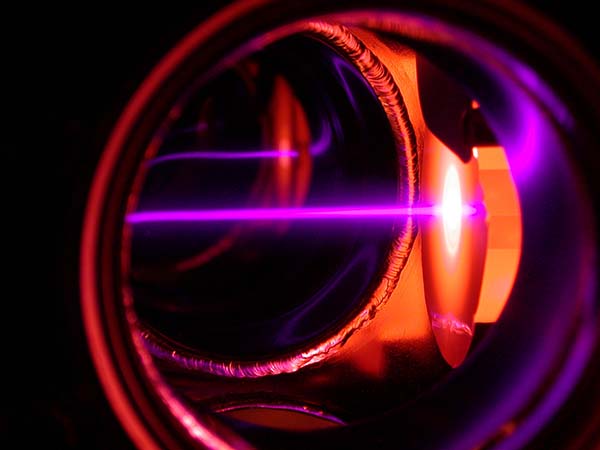 Lasers are ubiquitous in physics. Here, a purple laser beam slows erbium atoms emerging from an oven at 1300°C, in preparation for trapping and cooling.

CLEO—co-sponsored by DLS, the Optical Society (OSA), and the Photonics Society of the Institute for Electrical and Electronics Engineers (IEEE)—is focused on advances in research and technology in the laser science industry. With a regular attendance of over 5,000 people, CLEO typically draws 1,300 contributed talks, 400 posters, and 20 invited talks across categories like Applications & Technology (e.g. laser-based manufacturing and nanoprinting, advances in semiconductor technology, and biomedical applications), Fundamental Science (e.g. quantum optics of atoms, molecules, and solids, quantum information and communication, and metamaterials and complex media), and Science & Innovations (e.g. micro- and nano-photonic devices, quantum and atomic devices and instrumentation, and semiconductor lasers). After a successful virtual meeting this spring, the next CLEO meeting is tentatively slated for May 9-14, 2021 in San Jose, California.

Laser Science, the division's annual meeting, is held jointly with OSA’s annual meeting, Frontiers in Optics, in an event called FiO+LS. Drawing over 2,000 people from across the APS and OSA communities, FiO+LS features around 500 contributed talks, 70 invited talks, and 250 posters spanning a broad range of topics in optics and photonics. On the LS side, this year’s virtual meeting in September featured topics ranging from quantum information and quantum optics, optical lattices and atomic clocks, and biophysical and ultrafast and high-field laser science.

The participation of DLS in the APS March Meeting is also growing. “As lasers and photonics technology are becoming increasingly important in condensed matter physics, materials science, and other areas that are heavily represented at the APS March Meeting,” Averitt explained, “We are actively seeking to grow our presence there.”

Notably, at around 40%, DLS ranks among the top APS membership units in terms of student involvement—an indicator of the vibrancy of this rapidly advancing field. To this end, DLS makes several efforts to engage younger scientists, including offering student travel grants to enable conference attendance, undergraduate symposia at at CLEO and FiO+LS, and the Carl E. Anderson Dissertation Award to recognize exceptional doctoral work in laser science.

Looking forward, the DLS executive committee has two main goals for the division: (1) to increase the division's membership, and (2) to enhance its ability to represent those members and highlight the importance of lasers in education, fundamental and applied research, and industry. “Given the increasing importance of lasers and photonics in the 21st century, it is imperative to promote and communicate this to key decision makers,” explained Averitt. “DLS hopes to play an important role in accomplishing this to the benefit of our members, and more generally, society.”

Overall, DLS stands out as an ambitious and energetic division within APS, promoting research and exchange of ideas at the forefront of one of the most buzzing and interdisciplinary areas of physics. More information on this unit can be found on the DLS website.