Robotics research benefits many scientific disciplines: autonomous underwater vehicles gather samples from the deep seafloor, while surface rovers collect data from Mars. But smaller robots can also play important roles in research, like tracking the movements of ocean animals, monitoring microscopic changes in the body, and tracing the genetic evolution of communities.

Among the robophysics researchers who were planning to present work at the cancelled 2020 APS March Meeting, Brooke Flammang, Elizabeth Hunter, and Robert Austin are creating new technology ranging from physical robots that operate using only forces like friction to biohybrid and analog-digital robots.

Purely physical robots lack control circuits or an internal power source, making them a useful tool when studying the biomechanical evolution of unique animals like remoras. Remoras are a species of fish with an adhesive disc evolved from a dorsal fin, a structure that lets the fish attach to most sea animals, no matter how slippery their skin or how quickly they swim. 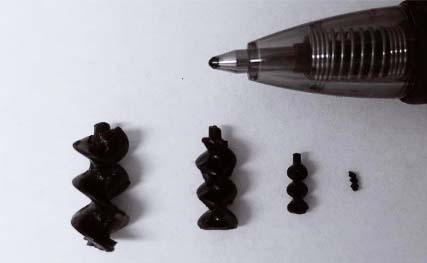 “A problem with automated design for evolution studies is that you start to introduce other things. A motor-driven system will add power to do the thing you ask it to do. A physics-driven system is only going to operate within certain physical, and therefore biological, limits. Those [can mimic] the limits in which the remora has had to evolve,” said Flammang, a biologist at the New Jersey Institute of Technology.

The remora’s adhesive disc has a fleshy sucker that encircles structures called lamellae, which have hundreds of tiny spinules that grab onto the host animal. However, suction alone does not explain how remora can attach to extremely fast fish like marlins, which reach speeds of 80 kilometers per hour.

By studying live remoras and using computer models of the adhesive forces of the discs, Flammang and collaborators found that friction is what helps the remoras stay attached to other fish: the spinules generate enough friction to counteract the drag force by a factor of ten.

Flammang’s student, Kaelyn Gamel, tested these results with a physical robot. She created a robotic adhesive disc and attached it to four different surfaces with varying degrees of roughness. For example, one surface was smooth like dolphin skin, while another was gritty like shark skin.

“[It] shows that adhesive performance increases with lamellae, and thus spinule, number. We know that remoras evolved more lamellae over time, and these results suggest that was driven by performance-based selection,” said Flammang, “We never would have been able to test this without physical robotics.”

Now, she and her laboratory are combining their robots with tracking devices to help marine scientists monitor whales and other sea creatures. “This offers a huge opportunity for a new technology where we can have better long term ecological and health biomonitoring of organisms with less of a health risk incurred to them,” said Flammang.

“Analog systems are not precise, but they are robust. They can find solutions to complex situations,” said Austin, a biophysicist at Princeton University working with physics graduate student Trung V. Phan.

Austin’s colleagues, led by biophysicist Liyu Liu and physics graduate student Gao Wang at Chongqing University, used analog technology to determine how a robot community behaves in a resource-limited landscape. They placed 50 silver-dollar-sized robots on a multicolored light board. The LED board was roughly the size of a stadium scoreboard and emitted colored light made from different combinations of green, blue and red. Analog cameras helped the robots sense colors and resources beneath them. Wang programmed the robots’ "genotypes" to favor green, blue, or red light. For example, blue-dominant robots preferred areas on the board with high intensity blue light: since they are "genetically" sensitive to blue, they derived more “resources” from higher intensities of the color.

Austin and Liu designed the robots to be genetically selfish, meaning each robot wanted to mutate as little as possible to preserve its evolutionary fitness. Some robots had genotypes that demanded all three colors in high intensities.

If a robot stayed too long in one area, it depleted the resources in that area. The robot died, and the board dimmed. Although robots largely avoided their dying neighbors, they would sometimes accidentally brush up against them, triggering a digital exchange of genes. This revived the dead robots by changing their genotype and allowing them to gather resources from other color intensities across the board.

Although the robots have some digital components, Austin and Liu are working to transition them to pure analog. They are collaborating with oncologist Ken Pienta at Johns Hopkins Medicine to develop a robotic model for cancer cell communities. “We’re hoping that we might learn more about how cancer maintains its robustness in this kind of system. I don't think you can replicate it on a computer. You really have to let it do its thing,” said Austin.

A different kind of robot—a biohybrid—can expand medical professionals’ ability to learn more about biological systems. These robots are very small, ranging from millimeters to microns in size, small enough to one day be used for medical purposes.

According to Elizabeth Hunter, a mechanical engineer at the University of Pennsylvania, there are three main challenges to developing these robots: fabricating the robot, controlling its movements and developing effective sensors to make the micro-robots smarter. “[These robots] have exciting applications, but the challenge [of] making them really lies in developing new locomotion measurement and information processing techniques and mechanisms to interconnect these components at small scales,” said Hunter.

To overcome these obstacles, Hunter built helical micro-robots ranging from one millimeter to 10 millimeters in size. She combined iron oxide with nontoxic, organic hydrogels to create “cell-friendly” robots. Since iron oxide is a magnetic material, Hunter was able to use an external rotating magnetic field to drive the “corkscrew” robots through fluids with different viscosities. She also equipped the robots with biosensors by decorating their surfaces with genetically engineered E. coli. The bacteria naturally produced fluorescent green protein signals. This engineered signaling protein could be modified to respond to signals like proteins, light, or chemicals.

Currently, Hunter’s team is developing new geometrical designs for her robots to test how they move across petri dishes and engineering new biosensing bacteria. “Essentially, we might be able to imagine these robots rolling across petri dishes and swimming in tubes performing automated laboratory experiments and probing different cells with high spatial and temporal resolution,” said Hunter.