Dr. Jami Valentine Miller’s journey to becoming the first Black woman to graduate with a PhD in physics from Johns Hopkins University is a story that will surely inspire the next generation of Black physicists.

She was born in Philadelphia to a family that valued hard work and education, and her family was always near. As early as elementary school, Valentine Miller was identified as gifted and talented. She went on to attend a middle school for gifted and talented students that would give her access to a new world. “While I was there I got into a program called PRIME,” she recalled.

PRIME is an acronym for Philadelphia Regional Introduction for Minorities in Engineering. According to Valentine Miller, the program bussed kids from all over the city who were interested in math and science. The program brought the students to college campuses during the summertime to prepare for the classes they were taking in the fall. She said that the PRIME program normalized being a Black geek during the 1980s.

The PRIME program is not the only factor that helped shape Valentine Miller into the person she is today. Eight years before she was identified as a gifted student, her aunt achieved the same distinction, but that opportunity was taken away because of the color of her aunt’s skin. According to Valentine Miller, during the 1970s, her aunt was a top math student and had even won a statewide math competition.

Unfortunately during this time, Philadelphia schools were heavily segregated. “The principal did everything he could to get her into that school, and they simply didn’t accept her,” Valentine Miler said. 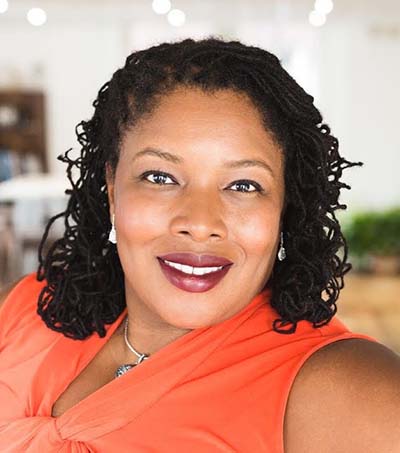 As far back as the first grade, she recalls students being bussed into schools. Desegregation bussing in the United States was an effort to add diversity to schools. “[It] wasn’t that long ago that we had to deal with these issues,” Valentine Miller said.

For all these reasons, the family was adamant that she would be in the gifted and talented middle school. “My mother worked for the school district for 39 years, so education was very important in our home,” Valentine Miller said.

When it came time to choose a college to attend, Florida Agricultural and Mechanical University (FAMU) found her.

Dr. Leonard Johnson, the president of the FAMU alumni association, was a Philadelphia doctor who insisted that university representatives go to every high school in Philadelphia to recruit students. Students who were merit scholars were distinguished by an armband, but on the day of the visit, she did not wear her armband because she did not want to wrinkle her shirt. After everybody gave their spiel, Johnson said that he wanted to see the class president and the valedictorian.

Valentine Miller questioned why he did not want to see her as well and Johnson asked who she was. To which she proudly replied, “I am Jami Valentine, I have had the highest SAT scores in this school for the last five years going.”

Following that meeting, she and sixteen other students were invited to go to FAMU. Valentine Miller recalled them boarding the Amtrak train, getting off in Jacksonville, and boarding a charter bus to get to the FAMU campus. “It was a bonding trip, because once you take a sixteen-hour train ride with high school students, y’all friends now,” Valentine Miller said.

Humphries asked her how she would like a full-ride—tuition, room, and board all paid for—and an opportunity to intern in California every summer at the Lawrence Livermore National Lab as a part of the Life Gets Better scholar program.

“That sounds great, where do I sign?” Valentine Miller asked.

Valentine Miller remembers this being a unique time at FAMU because of President Humphries. He was a charismatic man who made it his mission to recruit the top merit scholars in the country. She recalls the story of how he convinced her husband’s parents to allow him to go to FAMU. Humphries sat on his mother’s couch and talked his parents out of sending him to Florida State University.

“They just kind of want him, we really want him,” President Johnson said.

Valentine Miller recalls that when she got to FAMU she wasn’t the only Black physics major. Even at her internship at Livermore in California, she was surrounded by students from various Historically Black Colleges and Universities (HBCUs). “Usually it's like I’m the only physics major,” Valentine Miller said.

Valentine Miller said that at FAMU there were so many tech majors that you didn’t feel like it was weird to be in science. She also noted that you didn’t get a big head about being a physics major. “It was very normal to be about your science and your business,” she said.

After completing her program at FAMU, Valentine Miller attended Brown University for graduate studies. She was advised to continue her studies at Vanderbilt University, but she was set on going to Brown because it was a top Ivy League research institution.

“The social aspect was a bit of a challenge for me, but I did ok in my classes,” Valentine Miller said.

In the end, Valentine Miller was unable to pass her qualifying exam, which meant that she could not advance to PhD candidacy. Valentine’s research advisor, James Valles, assured her that she could be a great scientist and that he would write her a letter of recommendation.

For this next move, Valentine Miller would be more careful about where she would attend. According to Valentine Miller, she realized she did not want to live in a cold place that lacked diversity and she wanted to be near a national airport.

Her search to find the right university brought her to the National Society of Black Physicists. Valentine Miller had a plan to go to recruiting tables for schools that wanted Black students. With her resume printed on high-quality paper, she told each table that she did not pass her graduate qualifying exam and that her advisor would write her a letter of recommendation.

“The students at the Hopkins recruiting table were so energetic and happy, they didn’t seem like miserable grad students at all,” Valentine Miller said.

She remembered that the professor at the table told her that if she sent him her letters of recommendation, he would make sure that they were reviewed. Valentine Miller found Hopkins to be a better fit for her. Valentine Miller also noted that being near Morgan State University gave her additional support.

“Grad school is hard no matter where you go, but it was a better fit for me,” Valentine said.

In 2006, Valentine successfully defended her dissertation “Spin Polarization Measurements of Rare Earth Thin Films.” Her research journey included sleeping near the lab and working sixteen-hour days. “The work ethic is different, and it's much more intense,” Valentine Miller said.

“I look forward to the day when we won’t need to amplify these accomplishments,” Valentine Miller said.

Valentine Miller is currently working as a patent examiner at The United States Patent and Trademark Office and founded aawip.com, a website that features African American women in physics.

Valentine Miller created the website in 2005 while she was conducting her graduate studies at Johns Hopkins. According to Valentine Miller, the site came into being during a time when she felt isolated in her department.

The goal of the website is to honor the women who paved the way to inspire future physicists and connect with allies interested in promoting diversity in physics and other STEM fields.

According to Valentine Miller, the website has opened a new side career of studying African American Women in Physics.

The website currently features over 100 women starting from 1940 to current graduate students. The list begins with Katherine Johnson, who was portrayed by Taraji P. Henson in the 2016 film “Hidden Figures.” This year Jami Valentine Miller plans on celebrating 100 Black women with PhDs in Physics on the website.

The author is currently studying Strategic Communication at Morgan State University. To date, he has created pieces for the Online News Association, the Baltimore Times, and The Society of Professional Journalists. After graduation, he plans to work in the field of public relations as data analyst and content creator.