The 17th century Jesuit priest and polymath Athanasius Kircher was a contemporary of such scientific luminaries as Isaac Newton, Robert Boyle, Gottfried von Leibniz, and Rene Descartes, and enjoyed considerable public recognition for his scientific investigations—at least until his later years. His prolific writings cover topics ranging from geology, magnetism, and mathematics to astronomy, optics, acoustics, and Egyptian hieroglyphics. Although he has been called the “last Renaissance man,” and the “master of a hundred arts,” he never achieved the same long-lasting scientific legacy as his contemporaries.

The youngest of nine children, Kircher was born in 1601 or 1602 (even he was unsure) near what is now Hesse, Germany. His father was a magistrate, who ensured the boy attended Jesuit schools, and also learned Hebrew from a local rabbi, inspiring a lifelong love of languages. Young Athanasius was quite accident prone as a child, experiencing many brushes with death.

For instance, after initially being rejected by the Jesuit college in Fulda, a despondent Kircher injured his legs while ice skating, and the wounds festered, with gangrene setting in. During this time, he was accepted as a novitiate at the college in Paderborn, but his condition was so far advanced when he arrived that he was judged to be incurable. In Kircher's telling, he prayed to a statue of the Virgin Mary one night, and when he woke up the next morning his legs had miraculously healed.

Kircher took his vows in 1621, the same year the Duke of Brunswick’s troops took over the diocese, forcing Kircher and his fellow priests to flee to a nearby Jesuit college at Neuss. Kircher was swept into the water of the freezing Rhine river during the flight but managed to reach the shore and walk the remaining three miles to rejoin his colleagues. Forced to cross a war zone controlled by Protestant forces while traveling to Heiligenstadt in Saxony, Kircher didn’t bother disguising his Jesuit robes. He was stripped and beaten by a group of soldiers, who would have hanged him if it weren't for one soldier who had a change of heart and pleaded for mercy. 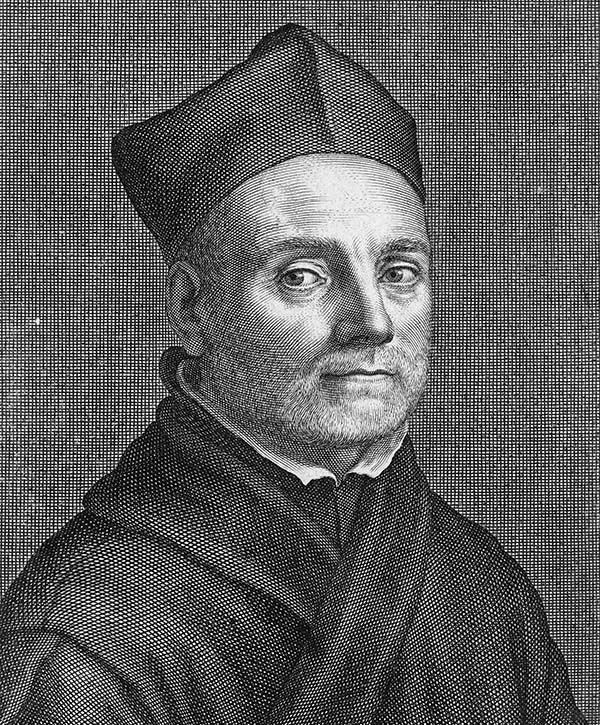 Other adventures included being shipwrecked on an island while traveling to Austria and witnessing the eruption of the volcanoes Aetna and Stromboli. On one especially memorable occasion, he lowered himself into the active crater at Mt. Vesuvius. “The whole area was lit up by the fires, and the glowing sulphur and bitumen produced an intolerable vapor,” Kircher wrote of the experience. “It was just like hell, only lacking the demons to complete the picture.”

Eventually he retired to a quieter life of scholarly contemplation, pursuing his scientific interests with equal passion. For instance, as the bubonic plague ravaged Rome in 1656, Kircher used a microscope to study micro-organisms in hopes of finding a cure, observing “little worms which propagate plague.” Given the poor resolution of microscopes at the time, these were more likely red blood cells he was seeing, but it did lead Kircher to suggest a rudimentary germ theory of disease, putting him far ahead of the medical orthodoxy of his time. Robert Hooke and Antonie van Leeuwenhoek would eventually reveal the microscopic world in even greater detail.

Kircher taught mathematics and tried to decipher Egyptian hieroglyphics; he was considered one of the leading Egyptologists of the time. His interpretation wasn’t correct—and the Rosetta Stone would not be discovered for another 100 years—but he correctly deduced that the Coptic language was crucial to unlocking the mystery. Another of his experiments disproved speculation that the Sun was a giant magnet whose rotation around its axis caused the Earth and the planets to stay in their orbits. His 1641 treatise on magnets may contain the very mention of the term “electro-magnetism.”

Indulging a mechanical bent, he built several pneumatic, hydraulic, and magnetic machines, including a magnetic clock. He even devised a Mathematical Organ (an example of which is preserved in the Museo Galileo in Florence, Italy) to provide answers to mathematical problems, although it required memorizing long poems in Latin (provided in an 850-page instruction manual) even to perform the most elementary functions. He maintained a large collection of unusual artifacts, including a stuffed aardvark and an automaton he called his Kircherianum—essentially an elaborate wunderkammer (“cabinet of curiosities”).

Kircher retreated to the Roman countryside when his health deteriorated. His reputation lost its luster as he grew old and gradually succumbed to a “second childhood.” He died on November 28, 1680. At his request, his heart was buried at an old church he had helped restore in the mountains outside Rome.

Kircher languished in historical obscurity for centuries, in part because his interests were so varied, but also because of his misguided efforts to unite Biblical historicism with science. A follower of the hermetic tradition, he wrote highly speculative treatises on Noah’s Ark (including a floor plan) and the Tower of Babel, for instance—the latter a natural (albeit scientifically sketchy) outgrowth of his longstanding interest in linguistics. He also invented a divination device he called “magnetic hydromancy.”

But in recent years, Kircher has inspired renewed appreciation for his uniquely eccentric gifts. The Los Angeles-based Museum of Jurassic Technology maintains a permanent exhibition on Kircher.

Glassie, John. A Man of Misconceptions: The Life of an Eccentric in an Age of Change. New York: Riverhead, 2012.