The APS Division of Plasma Physics

With 2,500 members, the APS Division of Plasma Physics (DPP) is a home for physicists involved in understanding and developing applications for plasmas. Research within plasma physics encompasses everything from the study of the fundamental interactions of particles and light in plasmas to the study of astrophysical plasmas in planetary cores and stars to practical applications of plasma for energy, medicine, and manufacturing.

As DPP chair-elect Michael Brown (Swarthmore College) put it, “virtually everything you see with a telescope is plasma. Anything you can see in nature that’s glowing is a plasma that has a group of scientists thinking about it.” Added DPP chair Ellen Zweibel (University of Wisconsin), “It is more a question of what isn’t encompassed in plasma physics. After all, most of the universe—well over 99 percent—is plasma. Within our solar system, space plasma affects the earth’s environment. And, on earth, there is magnetic fusion and inertial fusion, particle beams, plasma-aided manufacturing, plasma sterilization, and the list goes on.”

Nuclear fusion is, of course, one of the hottest topics in plasma physics, offering the promise of limitless, clean, sustainable energy to address the problem of climate change. 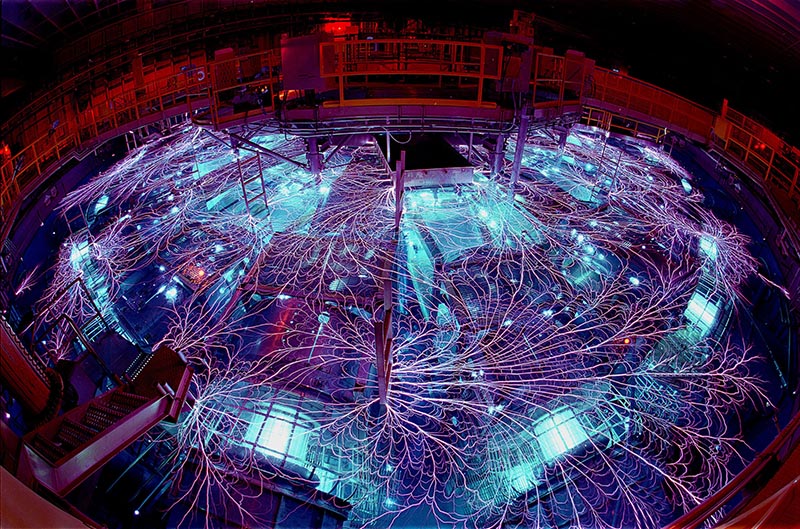 Most of the universe is plasma, and the physical behavior of these ionized gases is studied in both laboratories (shown) and astrophysical environments.

“The idea that we’re closing in on magnetic fusion or inertial fusion is really exciting,” explained Zweibel. “The climate crisis is an enormous problem that humanity has to solve. Being part of that is very exciting, and the recent progress is amazing.”

Other growing topics in the plasma field include low-temperature plasma physics (with implications for etching computer chips, industrial cleaning, or performing eye surgeries), understanding the large-scale behavior of plasmas (for instance, sheets of the aurora borealis, solar flares, or a lightning bolt), exascale computing to model particles within a plasma at a detailed level, and even the plasma-based sterilization of water or surfaces—a topic that takes on particular relevance in light of COVID-19.

Plasma researchers themselves are as diversified as this array of topics—pursuing theoretical and experimental work, spanning academia, industry, and national labs, and with disciplinary bases ranging from engineering to computer science to astronomy as well as physics.

A particular point of pride for DPP is its longstanding Annual Meeting. Typically drawing 2,000 people and nearly as many submissions, this meeting is a major event across the spectrum of plasma research. The 62nd DPP Annual Meeting is right around the corner, slated for November 9-13 in a pandemic-friendly online format. This year’s program has an emphasis on astrophysics, given that so much lab-based research has been on hold during the pandemic: Major invited talks will detail the latest insights from the Parker Solar Probe, the DKIST telescope, and the Event Horizon Telescope. The meeting also features several awards and prizes, including the Maxwell Prize for life-long achievement in plasma physics, the Rosenbluth Prize for best PhD thesis in plasma physics, the Stix Prize for early-career achievement, and the Weimer Award to recognize outstanding early-career achievement of a woman in plasma physics.

In normal times, DPP Annual Meetings also feature satellite meetings, “Plasma on Tap” events where scientists can present their research in an informal pub setting, and the hugely popular Plasma Expo where the general public can come to learn about plasma physics through presentations and hands-on experiments and demonstrations.

DPP also makes efforts to engage younger scientists at the Annual Meeting, holding a “Student Day” completely run by graduate students, an undergraduate poster session, a student appreciation reception, and town hall meetings for the concerns of early-career scientists. “Our division leans on the older side,” explained Brown, “and we’re doing many things to address that.”

2020 marks an important year for DPP, with the culmination of two major community-wide studies that will guide the future of the field: The Decadal Assessment of Plasma Science and the Community Planning Process (CPP). The Decadal Assessment, coordinated every 10 years by the National Academy of Sciences, aims to provide a snapshot of the plasma field that will help federal agencies and policymakers appreciate the importance of plasma research and encourage funding for plasma projects in the next decade. To complement this, the CPP has the specific aim of identifying and prioritizing scientific and technological opportunities in plasma physics, particularly fusion energy science, for the Department of Energy, the major funder of plasma research.

On the former, Zweibel explained that plasma physics can feel fragmented since researchers are spread among many disciplines. While this interdisciplinary nature is on one hand a strength that allows plasma physics to contribute to many fields, it also means that physics students are not routinely exposed to plasma physics in the way that they are to condensed matter or atomic physics. “Too often, when people think of plasma physics they think of magnetic fusion and how it isn’t here yet. Plasma physics is so much more,” she noted.

On the latter, both Zweibel and Brown underscored the need for greater diversity in plasma physics. “It is a problem in science in general, physics specifically, and plasma physics even more specifically,” explained Brown. Indeed, DPP has the lowest percentage of women of any APS unit at just under 10 percent. Brown described several concrete actions DPP has taken to remedy this, including highlighting the work of women scientists in invited talks at the DPP Annual Meeting, and nominating a record number of women as APS Fellows in 2019 (four in total, equal to the total number of women selected over the preceding five years).

Overall, DPP stands out as a thriving group for researchers interested in the wide world of plasma. “APS members should join DPP for the exciting physics and the opportunity to contribute to some of the most challenging problems of our time,” remarked Zweibel. “With such a diverse suite of problems, there is something for everyone in plasma physics.”

More information on this unit can be found at the DPP website.

The author is a science writer based in Stockholm, Sweden.