As the country confronts systemic racism and other forms of discrimination, those of us in higher education, including physics departments, need to reflect on how we may be inadvertently propping up these barriers. My research group has been studying the factors that determine the success of students in introductory college physics courses, and the data show how physics instruction and the current curriculum is supporting systemic discrimination. A primary enabling factor is the concept that students can be classified in terms of their “talent,” supposedly a fundamental quantity reflecting their capability to do physics.

It is well known that various minority groups are disproportionately impacted by the COVID-19 pandemic. This is not because of some fundamental difference in their biology. It is because of the inequities in their living and working conditions, and the health care they are able to access. Similarly, the distinctions between various college students taking introductory physics primarily reflect the educational inequities in our society, rather than any innate differences between individuals. The inequities in K-12 education in this country are similar to those seen in coronavirus exposure and treatment. In both cases, these inequities across different demographic groups can be traced back to differences in socioeconomic status and the structural bias that maintains those differences. 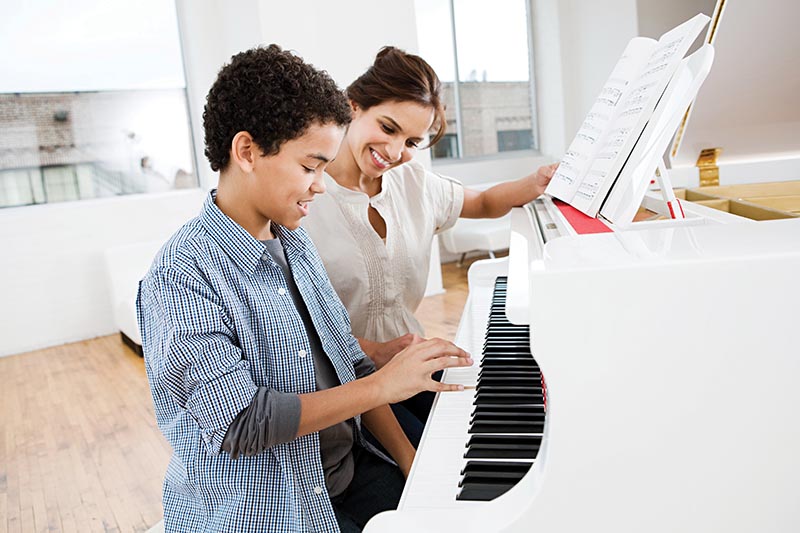 Innate talent or privileged preparation? Perfect pitch was something thought to be the result of having some remarkable genetic gifts, until someone seriously tried to teach it. Now it has been demonstrated that almost any child can be taught to have perfect pitch if they get the right instruction.

When departments attribute differences in student performance to differences in talent, rather than differences in educational privilege, they are sustaining and enhancing these systemic inequities. Often, these inequities are further amplified by departments providing special educational opportunities and support to these more privileged students, in the form of “honors classes,” research opportunities, etc. It is especially hard to recognize educational privilege when one is a beneficiary of it, as are most of the physics faculty of my generation, including myself. Of course, we all worked very hard to attain the expertise and success that we have achieved, but that does not mean there were not millions of other children who could have been just as successful if they had the same opportunities, but they did not.

My group has investigated what factors are predictive of success in college physics [1]. Basic measures of physics preparation from high school were the only factors that we found were significant, and they were surprisingly good predictors, explaining about 30% of the variance and much of the failure rate. This was with rather crude measures of preparation. The actual effect is larger, as we see as we extend that work with more complete and detailed measures of incoming physics preparation. After controlling for these measures of preparation, gender, first generation college student, and minority status made no contribution in the predictive model.

We do see that these demographic groups are systematically receiving worse physics preparation in high school. Seymour and Hunter have carried out a broader but less detailed study [2] than ours and they also see that performance in introductory science and math courses is strongly affected by students’ prior preparation. Their data show that these general differences in level of preparation across demographic groups primarily depend on the socioeconomic level of the school district the students attended. Seymour and Hunter also show how low performance in these introductory courses has a substantial impact on students switching out of a STEM major.

The Legacy of Inadequate Preparation

Physics departments are unknowingly driving many students from under-represented groups out of physics and other STEM fields by having introductory courses in which less prepared students are likely to do badly. These students' only “mistake” is to come from poor families, or more precisely, come from school districts with less money and hence worse physics teaching. We have interviewed many aspiring STEM students who come into Stanford with relatively weak physics preparation, and they paint a stark and disturbing picture of physics teaching in the US K-12 system, shocking for those like me whose own experience with the K-12 system is from affluent college towns. Their descriptions of their high school physics courses are filled with examples like “My school did not have a physics teacher, so we just got a series of substitutes all year, none of whom knew any physics,” or “The person who was supposed to teach our AP physics class told us on the first day we would need to learn on our own, and then he left for the rest of the semester.” There are many other stories nearly as bad.

One striking feature of our analysis of the importance of prior preparation in physics is that other quite different institutions show very much the same pattern as Stanford. The impact of prior preparation on grades was nearly identical between Stanford and a large public university that had an acceptance ratio about 100 times greater than Stanford. The same measures of prior preparation, while much lower on average for the public university, are just as good predictors/determinants of student success and, more importantly for student career choice, failure. A third institution we examined was similar. This, in addition to the data in ref. 2, suggests that most physics departments are likely setting up their courses to cater to the well-prepared students, and in the process, they are sacrificing those less prepared. Such a choice makes sense if you mistakenly attribute the differences to talent. In that case, you want to optimize the educational benefits for the talented students, as they would be wasted on those with little talent.

Setting Students Up for Failure?

The admissions office of a typical college or university is appropriately looking at many different student qualities, and so students are never admitted solely on the basis of their physics preparation. At any reasonably selective institution, every student has some exceptional qualities or accomplishments, most of which are less sensitive than physics teaching to the economics of their school district. As a result, many students with weak physics preparation will be accepted and enroll at a good school like Stanford, thinking that they will be able to pursue a STEM career. They do not realize until too late that their physics preparation, rather than all those accomplishments noted by the admissions office, actually will determine what majors they can and cannot pursue. Although the introductory courses are the most critical for students' career choices, at Stanford the entire curriculum for the physics major shows much the same pattern, with it being optimized for the students who come in with the very highest level of incoming preparation, while presenting huge barriers to students who are eager to pursue physics but are less prepared.

I am sure that Stanford is not unique in this regard, with many other physics programs, and other science majors, having similar features, because the concept of physics “talent” is so pervasive. I have spoken at dozens of physics and other science departments about research on teaching and learning. In virtually every case I am asked the question, “How can I deal with the wide spread of students in my class?” Curiously, this same question comes as often from instructors of graduate courses at elite universities as it does teachers of introductory physics at community colleges. In the great majority of those cases, the conversation then soon turns to “How do I best teach the most talented students, without hopelessly losing the less talented.”

For physics departments to make progress at reducing rather than sustaining the systemic discrimination that exists in our society, they will have to make a fundamental change in how they classify students. They need to recognize that student success has little to do with “talent” and a great deal to do with “educational privilege.” There is considerable research [3] supporting this claim. In studies of expertise across many different fields it has been shown that the attainment of any substantial level of expertise is determined primarily by the amount of “deliberate practice” an individual has performed, and depends little on any a priori measure of talent in the subject that anyone has been able to find. “Deliberate practice” is a particular type of intense learning activity, often present in the best graduate training and some very well taught courses. It leads to changes in neuron connections—changes that embody the enhanced expertise. This view that effortful learning (“deliberate practice”) dominates over talent is very much at odds with our cultural myths, but it is strongly supported by the research. In the context of the current societal discussions, it is perhaps worth noting that the concept of the innate superiority of certain “talented” people goes back to the work of Galton in the 1800s. His goal was to generate “scientific” evidence of the innate superiority of the English nobility, to justify their hereditary privileges.

Beyond this fundamental change in thinking about student differences in terms of their educational privilege rather than their talent, what should a physics department do to avoid implicitly accepting and increasing systemic discrimination? I do not believe there are any easy solutions, and so I offer none. It will require the changing of long held beliefs, curriculum, and allocation of resources. It seems unrealistic to expect we can quickly or easily erase or compensate for the differences in the preparation of the incoming student population, whatever the source. It also is irresponsible to simply blame the K-12 education system and wash our hands of the problem. Every department should examine its student population, its educational practices, and its student outcomes, looking for where and how it is discriminating against students whose only failure is a lack of educational privilege.

Then it needs to have a painful examination of what changes it can and should make to address such educational inequities—painful because, as well as changing basic thinking about student differences, it will likely involve shifting resources from the most prepared/privileged to the least. For example, changing the coverage and pace of some intro courses so they are optimized for the third of the distribution with the least preparation, and switching from lectures to active learning teaching methods, which are especially beneficial for less prepared students. Perhaps replacing some “honors” courses with new courses targeting the less prepared, so that there is a comfortable path for students to successfully explore and pursue a physics major, regardless of their precollege preparation. It will also likely require shifts in the incentive system, so that teaching small classes with the best prepared students is no longer the prized teaching assignment, but rather faculty will be competing to show they can teach and achieve the best results with those students who have suffered the greatest educational inequities on their way to college.

The author is in the Department of Physics and the Graduate School of Education, Stanford University. He has done extensive research in AMO physics and received the Nobel Prize in physics in 2001 with Eric Cornell and Wolfgang Ketterle for the creation of Bose-Einstein condensates. He has also worked in physics education research for several decades, with a particular interest in how expertise is learned and measured, and how to increase the enjoyment and success of all students in introductory physics. In September 2020, Wieman received the $3.9 million Yidan Prize for Education Research for his contribution in developing new techniques and tools in STEM education.