When Isaac Newton formulated his laws of motion and universal law of gravitation in the 17th century, he could not have foreseen that his work would one day lead to the discovery of a new planet in the solar system: Neptune. Credit for predicting its position in the night sky is historically given to the French astronomer and mathematician Urbain Le Verrier, but Le Verrier had a British rival, John Couch Adams, who independently arrived at the same conclusion.

There is evidence of prior sightings of Neptune after the invention of the telescope: Galileo Galilei in 1612/1613, Jerome Lalande in 1795, and John Herschel in 1830, most notably, although none realized the object they had observed was a planet. Galileo thought it was fixed star, probably because Neptune was going into retrograde (apparently moving in a direction opposite to that of other planets) when he observed it and thus appeared to be stationary. Herschel also mistook Neptune for a star.

However, in 2009, physicist David Jamieson, argued that Galileo may have suspected it was a planet. Jamieson found a note in one of the astronomer’s notebooks noting the movement of a “background star” on January 28, 1613, also marking a dot with a different ink, which Jamieson interpreted as having been from an earlier sketch on January 6—evidence that Galileo was tracking its possible movement. But there is no record of Galileo ever following up on this.

The hunt for a possible new planet was triggered in 1821, when Alexis Bouvard published astronomical tables for the orbit of Uranus. The tables predicted the planet’s position based on Newton’s laws of motion of gravitation, and astronomers began comparing their observations to those tables. That’s how they discovered some significant discrepancies between the predictions and their observations, especially once Uranus had completed one full orbit (in 1847) following its 1781 discovery by William Herschel. These discrepancies could have been due to the influence of the Sun’s gravity, or the result of observational error. Or they could have been evidence that the orbit of Uranus was being perturbed by another, as-yet-undiscovered planet. 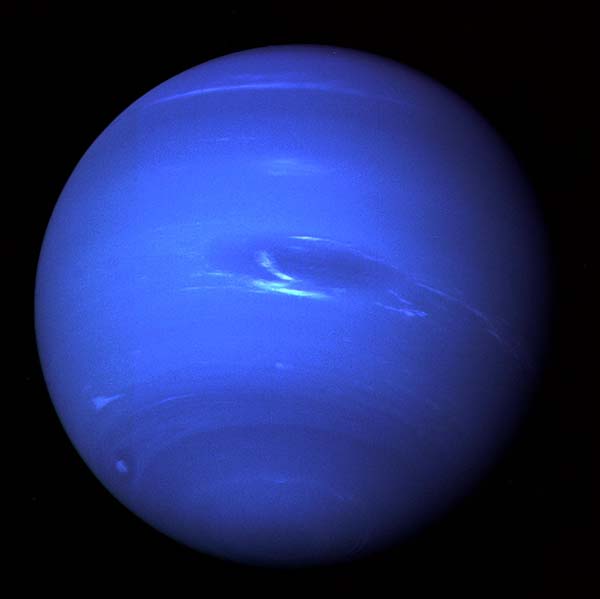 The existence of Neptune was independently predicted by Urbain Le Verrier and John Crouch Adams. This picture of Neptune was produced from the last whole planet images taken by the Voyager 2 spacecraft.

Le Verrier was among those who favored the new-planet option. Born in 1811, Le Verrier attended the École Polytechnique, initially studying chemistry before switching to astronomy, with a particular interest in celestial mechanics. He took a job with the Paris Observatory, where he would spend much of his career, serving as director from 1854–1870, and from 1873 until his death in 1877. Following early work on the stability of the solar system and on periodic comets, he turned his attention to the irregularities in Uranus’s orbit, at the urging of the physicist Arago.

On August 31, 1846, Le Verrier presented his predicted position for a new planet to the French Academy, and also sent a letter to Johann Galle at the Berlin Observatory containing his conclusion. Galle wasted no time turning his telescope to the predicted position. The very first night, on September 23, 1846, Galle and his colleague, Heinrich d’Arrest, found Neptune within 1 degree of Le Verrier’s predicted location. It took them less than an hour to do so. Just 17 days later, William Lassell discovered Neptune’s moon, Triton.

But controversy broke out soon after. While Le Verrier was making his calculations, a young British mathematician and astronomer named John Couch Adams was doing the same in England. Born in 1819 to a poor tenant farmer in Cornwall, Adams was privately educated, until a chance inheritance made it possible for him to attend the University of Cambridge to study astronomy. While still an undergraduate, he learned of the discrepancies in Uranus’s orbit, and the possibility of a new planet. Adams thought he should be able to use observational data on Uranus to determine the mass, position, and orbit of that suspected planet using Newtonian physics.

He continued this work after completing his studies and becoming a fellow of his college, tutoring undergraduates. It seems that Adams told James Challis, director of the Cambridge Observatory, about his completed calculations in mid-September 1845, but this claim has not been definitively confirmed. Furthermore, Adams did not provide detailed calculations, merely the method by which he arrived at his predictions. Challis did not, at the time, deem this sufficient to start looking for the hypothesized planet.

In October 1845, Adams called on the Astronomer Royal, George Biddell Airy, but he was away. Adams purportedly left a manuscript for Airy containing detailed calculations of his own solution to the conundrum. Airy responded with a letter requesting some technical clarifications, to which Adams never responded. (This may have been due to the young man’s tendency toward procrastination and disorganization.)

When Airy heard about Le Verrier’s prediction, he instructed Challis to look for the presumed planet, hoping to beat France to the discovery. Adams provided six different solutions in 1845 and 1846, some of which led Challis to search the wrong part of the sky. But after Neptune was officially discovered, Challis realized that he had observed the planet on August 8th and 12th, a month or so before Galle and d’Arrest. He just didn’t recognize it as such because his star map was out of date.

While others might have bitterly debated who most deserved priority in predicting the position of Neptune, Adams himself took pains to acknowledge the prior claims of Le Verrier in a paper presented to the Royal Astronomical Society in November 1846 on his own work.

“There is no doubt that his researches were first published to the world, and led to the actual discovery of the planet,” he wrote, lamenting his own failure to convince his colleagues of the veracity of his own calculations. “I would not expect however that practical astronomers… would feel as much confidence in the results of my investigations, as I myself did.” He would go on to succeed Challis as director of the Cambridge Observatory, a position he held until his death in 1892.

Airy, G. B. (1847) “Account of some circumstances historically connected with the discovery of the planet exterior to Uranus,” Memoirs of the Royal Astronomical Society 16: 385-414.