Physics Departments Ditch the GRE in Bid for Equity

Physics and astronomy departments at US and Canadian universities are dropping the general Graduate Record Examination (GRE) and physics GRE (PGRE) requirement in droves. Since March, over two dozen departments have abandoned the tests, according to James Guillochon, an astrophysicist formerly at the Harvard-Smithsonian Center for Astrophysics (CfA) who maintains a public list of GRE requirements.

A 2019 survey by Science Magazine found that physics programs were among the slowest to drop the GRE. Now, more than half of the programs on Guillochon’s list have permanently done away with the GRE requirement, and a full two-thirds no longer require it for the 2020–2021 admissions cycle. Physics departments have issued statements that “acknowledge the significant disruption” from the COVID-19 pandemic and the difficulties associated with taking the GRE at this time. 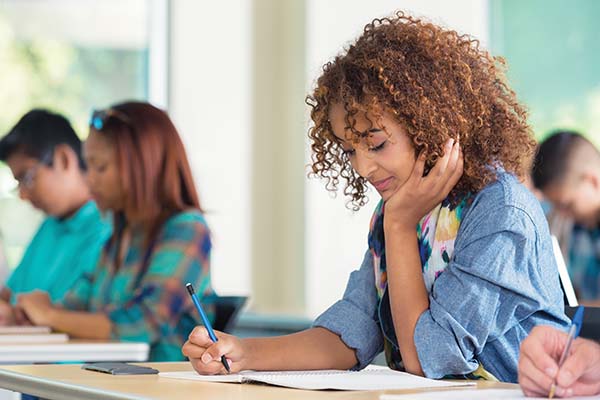 “I think that this pandemic has exposed for people in a new way the levels of inequity throughout our society,” says Alexander Rudolph, an astronomer at California State Polytechnic University who directs the Cal-Bridge program. “It seems to have incited a real examination of the way culture and systems and societal inequities play themselves out... in particular in graduate admissions.”

Although the recent move away from the GREs is primarily driven by the COVID-19 pandemic, it coincides with Black Lives Matter protests and threats to legal immigration from the Trump administration. Physics remains one of the least diverse STEM fields—with only 20 percent of PhDs awarded to women and 5 percent awarded to underrepresented minorities in 2019—and there has been growing pushback against the GREs for years.

“We'll see what happens once COVID is over, whether or not [departments] decide to continue to do admissions more inclusively,“ says LaNell Williams, a PhD candidate at Harvard.

Advocates for dropping these tests claim that the GRE has no bearing on graduate school success and when universities require it, they end up with a less diverse applicant pool. Evidence for both claims has been bolstered by studies in recent years.

“One of the most commonly reported things is, ‘Hey, I took the GRE and I bombed it’,” says Ted Hodapp, APS Director of Project Development and a former director of the APS Bridge program, which aims to increase the number of PhDs awarded to underrepresented minorities in physics. In 2019, Hodapp was coauthor on a study which found the physics GRE did not predict PhD completion.

“[We found] that the PGRE tends to be correlated with the grades in the first year of grad classes,” Hodapp says. “But it's not a measure of your potential for success.”

Part of this may have to do with the format of the exam, a closed-book test that consists of 90-second multiple choice questions across a broad range of subject areas.

“It's very clear to me as someone who's gone through grad school, that I never did any problem that even remotely resembles what a physics GRE problem looks like,” says Guillochon.

Educational Testing Services, which owns, designs, and implements the GRE, notes in its guidance for graduate admissions, that “using a minimum GRE score as the only criterion for denial … is not good practice.” However, many programs don’t follow this guidance, and use it as a cutoff, according to Hodapp.

In a statement, David Payne, a Vice President at ETS, defended the continued use of the test. “Using GRE scores as part of a holistic admissions process is especially vital in the wake of a global pandemic to ensure programs can continue to admit a diverse and academically prepared class with as much information as possible about each applicant,” he says.

Current graduate students pointed to other issues with the test. While the GRE is offered three times a year in the US, in many places, international students have fewer chances. Sanjana Sekhar, a PhD candidate at Johns Hopkins University, had to delay her application an extra year to retake the test, which is offered once a year in India.

“The first thing to know about these two exams is just that they're really expensive,” Sekhar says. The cost to take both the GRE and PGRE can total 75 percent of the monthly stipend for a PhD student in India, according to Sekhar, which she says actively deters students there from applying to US universities.

The testing cost comes on top of three-figure application fees for international students. Just applying to a dozen schools can easily cost $1,500. Even with fee waivers, taking and sending the test scores costs hundreds of dollars, according to George Iskander, a graduate student at the University of Chicago.

In 2015, the American Astronomical Society issued a recommendation that graduate astronomy programs stop requiring the GRE because of these concerns. The APS Panel on Public Affairs is developing a statement about the entire graduate admissions process, with the PGRE as a component, which will be put to the membership for comment, likely this Fall.

Preliminary results of eliminating the GRE as a requirement within astronomy programs show a dramatic impact. David Charbonneau, an astronomer at CfA, says that when the program eliminated the GRE requirement in 2016, applications rose from 184 to 324, with the largest increases coming from US citizens who are underrepresented minorities and women who are non-US citizens. Laura Lopez, an astronomer at the Ohio State University, found a similar pattern of diversified applicant pools across 27 astronomy programs. What this means for actual admissions, however, has not been well studied.

Other admissions criteria are also being reexamined. The research Hodapp was involved in found that GPA is not a good predictor for success in graduate school and concerns swirl around letters of recommendation, which may create a bias against applicants from institutions such as Historically Black Colleges and Universities.

Yoni Kahn, a theoretical physicist at the University of Illinois who co-wrote the popular book “Conquering the Physics GRE,” says that although the test format has “very little relationship to grad school work,” some strategies to solve problems—such as dimensional analysis, limiting cases, and order-of-magnitude estimates—are valuable.

“It would be worth having a community-wide discussion on the intended purpose of the GRE in admissions decisions, and how the exam and the admissions process more generally could be restructured to emphasize these useful elements while minimizing the standardized-test baggage,” Kahn says.

APS News also asked graduate students about their thoughts on fair ways to diversify admissions. Sekhar suggested that for PhD-only applicants, the statement of purpose, which highlights research, might be a better metric. Iskander, who is a first-generation student, emphasized the importance of peer mentorship to his success. Williams, who is Black, says the onus of admitting and retaining a diverse group of grad students should not be on underrepresented minorities, but the responsibility of predominantly white institutions.

“I would challenge universities to think about what these things are actually measuring,” she says. “Take this moment to do the right thing.”