Since 2015, the American Physical Society and the Brazilian Physics Society (SBF) (the two largest physics societies in the Americas) have been promoting joint meetings to foster connections among young physicists from the US, Brazil, and other countries. The idea came out of discussions by the APS Committee on International Scientific Affairs (CISA), making use of funding from the São Paulo Research Foundation (FAPESP) in São Paulo, Brazil. In its mission to develop science and technology in the state of São Paulo, FAPESP has been pursuing a strong international agenda based on establishing joint research collaborations, sending Brazilian researchers for short (up to one year) stays abroad and bringing talented young and experienced researchers to participate in research activities in organizations in the state of São Paulo.

This partnership among APS, SBF, and FAPESP has so far launched four international meetings that have brought together young physicists from across the globe—two have been held in Brazil and two in the United States. These meetings directly support the goals of the APS Task Force on Expanding International Engagement. (As reported in the January 2019 issue of APS News, the Task Force had worked for 18 months to examine how the Society could increase its international engagement and better serve the international physics community.1)

To develop these meetings, APS and SBF mobilized their membership to jointly prepare and submit proposals to FAPESP’s “São Paulo Schools of Advanced Science (SPSAS)” program, which offers funding to organize two-week schools. These bring between 70 and 140 young scientists (early career, post-docs, last year PhD students) to São Paulo from any country to attend the lectures presented by a team of experienced researchers from São Paulo and from other countries. 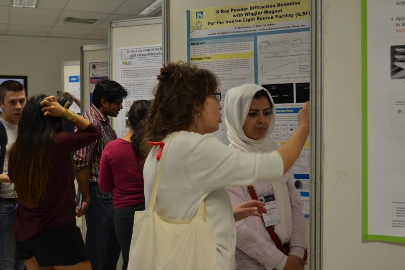 Poster presenters discuss their latest research at a joint meeting of APS and the Brazilian Physical Society.

In July 2015 Harry Westphal and Helio Tolentino (Brazilian National Synchrotron Light Source) and Ercan Alp (Advanced Photon Source, Argonne National Laboratory) organized the (São Paulo School of Advanced Sciences on Recent Developments in Synchrotron Radiation). The school took the opportunity presented by the development and construction, in Campinas, Brazil, of SIRIUS, a 4th generation 3.0 GeV synchrotron light source (see lightsources page) to offer the participants the opportunity to learn about recent advances and see the light source during its construction phase. Ninety-six participants attended, 48 from Brazil and 48 from 17 other countries including the US, France, Argentina, Iran, Germany, Turkey, Canada, and South Africa. (Details are at the FIP newsletter article on São Paulo.)

In 2016 the YPF was held in Baltimore, MD, the weekend before the APS March Meeting (March 12-13). It featured scientific presentations by young physicists, defined here as physicists employed in permanent professional roles who had completed their PhD degrees within 10 years prior to the Forum. There were 50 participants, 24 from Brazil and 26 from the US. All contributed scientifically through parallel sessions or the poster session. Along with the scientific sessions, participants gained insights into career development and were afforded the opportunity to network with industry leaders and distinguished physicists from the US and Brazil. Panel discussion topics included university-industry cooperation and broadening the scope from a purely academic focus to introduce topics of interest to industrial leaders from FAPESP, APS, and SBF.

The São Paulo Advanced School on Experimental Neutrino Physics took place in December 2018, in Campinas, SP (sites.google.com/site/spsasen/home). It was organized by Ettore Segreto and Ana Amelia Machado, both from the Physics Institute at the University of Campinas (Unicamp). The school benefited from the fact that Ettore and Ana Amelia are the creators of ARAPUCA, an outstanding neutrino detecting device to be used in Fermilab’s DUNE experiment, for which they received the APS Early Career Instrumentation Award in 2019. The school was attended by 100 participants, 40 from Brazil, 15 from Europe, 15 from the US, 25 from Latin America, and 5 from Asia. There were 22 lecturers, 9 from the US, 2 from Italy, 2 from Spain and 11 from Brazil. Nobel Laureate Arthur McDonald gave a keynote speech via web conference. Focusing on experimental neutrino physics, the school had plenty of hands-on activities.

The most recent APS-SBF Young Physicists Forum was the São Paulo School of Advanced Science in Biological Physics, held at the South American Institute for Fundamental Research (SAIFR) in São Paulo on March 9-15. SAIFR, led by Nathan Berkovits, a professor at the Theoretical Physics Institute at the Universidade Estadual Paulista (UNESP), is an initiative put together by ICTP, FAPESP, and UNESP, to be a hub for fundamental science in South America. The Young Physicists Forum on Biological Physics was organized by Fernando Barroso (USP, Ribeirão Preto, Brazil) and Ralf Eichhorn (NORDITA, Sweden). There were 67 participants, 45 from Brazil, 4 from the US, 6 from other countries in South America, 7 from Europe, 3 from India, 1 from Canada and 1 from the Dominican Republic. In the opening session there was a talk by the President of the Brazilian Physics Society (Rogerio Rosenfeld) and a session about APS in which APS President Phil Bucksbaum participated through a video recording, APS Director of International Affairs Amy Flatten participated via Zoom, and I presented a deck of slides about APS and the opportunities it offers for international members and students. (This was the last event at SAIFR before the restrictions due to the pandemic took place).

The APS-SBF Joint Young Physicists Forums are highly praised by the participants in the post-event evaluations. They open opportunities for lifelong interactions and help advance research in physics in Brazil, the US and worldwide. They fit well in the strategy to develop science and technology in the State of São Paulo, Brazil, by bringing talented young researchers to visit the Brazilian laboratories and institutions so that some of the visitors may consider research in Brazil as an option for the future. Through the APS-SBF Young Physicists Forums, participants learn of many additional opportunities for future collaboration. Particularly, in the state of São Paulo, FAPESP offers a Young Investigator Award, which is a five-year grant for a person who wants to start a research career in the state. The grant includes funds for equipment, consumables, fellowships for students, travel. Each year between 50 and 80 young scientists from all over the world have such a grant approved (check out the list of Young Investigator grants in Physics and Astronomy) and the grant opportunity is open to persons of any nationality (as long as they are willing to move to a research institution in São Paulo to lead the research project for 5-years… or more if they like it here).

For the APS, the APS-SBF Joint Young Physicists Forums foster connections and strengthen relationships throughout the international physics community, a key goal of the APS Strategic Plan2. This is essential to the advancement of physics research in the US and for this reason APS highly values the international nature of science and international scientific cooperation demonstrated by these Young Physicist Forums.

The author is at the Physics Institute, University of Campinas, Campinas, SP, Brazil. He is a member of the APS Committee on International Scientific Affairs.