Recent telescope and gravitational wave observations have enabled researchers to characterize black holes in new ways and perform tests of general relativity in the most dramatically warped spacetime environments yet. Even as collaborations suspend observing runs due to the ongoing pandemic, researchers still have a rich backlog of data to sort through for new insights, some of which were presented at the Virtual April Meeting.

At the meeting, researchers from the Laser Interferometer Gravitational-Wave Observatory (LIGO) and Virgo announced an unusual new signal, observed on April 12, 2019, from two black holes merging 2.5 billion light years away. Notably, this event involved a bigger black hole, 30 times the mass of the sun, and a smaller black hole, about eight times the mass of the sun. This contrasts with the 10 black hole mergers previously detected by the US-based LIGO and Italy-based Virgo, which involved black hole pairs around the same size.

Because this event looks so different from the others, it deepens researchers’ questions about how black holes pair up. In particular, this signal defies a previous conclusion that black holes are likely “picky partners,” as Maya Fishbach, a member of the LIGO collaboration, calls them. “From the first ten detections, it looked like they were very picky and only pairing with similar mass partners,” says Fishbach, a recent PhD graduate of the University of Chicago. “With this latest one, it looks like there are some systems that aren’t so picky.” 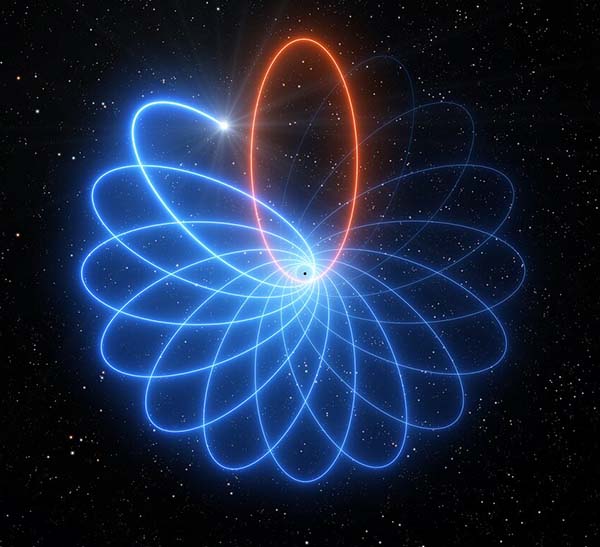 Artist's rendition of Schwarzschild precession of a star's orbit around a black hole.

It’s an open question how this system could have formed. One potential strategy for solving this mystery involves studying the statistics of observed black hole mergers. For example, Fishbach has built simple models that describe the mass distribution of the black holes in the 11 detected events thus far. These models may help illuminate how these objects form: Researchers simulating black hole formation check if their models replicate Fishbach’s statistics. While 11 gravitational wave signals make for a small data set currently, the collaboration has 56 candidate signals to potentially add to the mix.

The current statistics support the idea that black holes of a certain mass range don’t exist, the so-called pair-instability mass gap. In particular, researchers have not found intermediate-mass black holes between 50 and several hundreds of thousands solar masses. It could be that stars of a certain mass become so-called pair-instability supernovae, which produce electron-positron pairs that completely blow apart the star, leaving no remnants.

Reinhard Genzel, Director of the Max Planck Institute for Extraterrestrial Studies in Munich and leader of the GRAVITY collaboration, reported recent studies of the galactic center. Just two days prior to his talk, they published the first measurement of the precession of the star S2 around the supermassive black hole Sagittarius A* at the center of the Milky Way. This so-called Schwarzschild precession, in which the star’s orbital path shifts slightly with every revolution, confirms a prediction by general relativity.

This measurement was an epic undertaking that began as early as 2002, when Genzel and his colleagues discovered that at its nearest approach, the star orbits just 17 light hours away from the black hole with an orbital period of about 16 years. Determined to observe the star’s subsequent revolution, the group prepared for over a decade to develop and install new infrared instruments at the Very Large Telescope in Chile. Evaluating the star’s orbit in 2018, they saw that its position had shifted.

The magnitude of this shift, which they measured to more than 5.5 sigma, matches general relativity predictions to about 15 percent. For a more precise measurement, they “need a star which is still closer [to the black hole],” says Genzel.

In 2019, the group also reported a test of a general relativity assumption called local position invariance using observations of this same star. They monitored light emitted from the star’s hydrogen and helium atoms. As the star approached closer to the black hole, the stronger gravity redshifted the frequency of the light more. The collaboration confirmed that gravity shifted the helium frequency the same amount as the hydrogen frequency, as predicted.

Observations of such stars as S2 give astrophysicists the ability to test their hypotheses about extreme gravitational environments. “All of a sudden, we are using distant objects like tests in the laboratory,” says Genzel.

After the Event Horizon Telescope (EHT) collaboration published the first image of a black hole last year, fans have hotly anticipated their follow-up release, an image of Sagittarius A*. It's a top priority for the group, and they have amassed plenty of observations on this black hole already. “It’ll be hopefully within the next year,” says Michael Johnson of the Harvard-Smithsonian Center for Astrophysics, a member of EHT.

Although our galaxy’s black hole is a mere 25,640 light years away, imaging it has proven significantly more difficult compared to M87, the orange donut published last year that is 55 million light years away. M87 is outside of the galactic plane, which means its light does not have to travel through much interstellar plasma before it reaches Earth. Not so with Sagittarius A*. “We’re peering through our own galaxy, and it’s like looking through frosted glass at the black hole,” says Johnson.

In addition, our black hole is far more dynamic than M87, making it harder to reconstruct a clear image. “A day in the life of M87 is a minute in the life of Sagittarius A*,” says Johnson.

The team is also studying other objects observed during 2017 and 2018. In April, they released an image of the quasar 3C 279, 5 billion light years away, which spews jets of plasma powered by a central supermassive black hole. In their analysis, the team traced the jet back to its launch point with spatial resolution finer than a light year.

Despite the flurry of black hole research, the worldwide pandemic has made its mark on the community. Many ground-based observatories have been closed this spring. To protect the health of their staff, LIGO and Virgo shut down their facilities at the end of March, ending their observing run a month earlier than planned.

These shutdowns leave conspicuous gaps in their observing data. Unfortunately, the shutdowns coincided with the month of April, which is usually the optimal time for observing the galactic center, says Genzel. “We’re not going to have data in 2020,” says Johnson, of the EHT collaboration.

Prior to the shutdowns, the EHT collaboration had been planning to coordinate observations at 11 different sites this year, three more observatories since the first black hole image was taken. “It’s heartbreaking,” says Johnson. “We schedule these observations months and months ahead of time. We were right at the point of sending people to sites and finishing all the preparations when we had to make the call.”

For now, researchers will make do with the data that they have. “The good news is that we’re used to telecons,” says Johnson.

The author is a freelance writer based in Columbus, Ohio.