May 1664: Hooke vs. Cassini: Who Discovered Jupiter’s Red Spot?

One of the most easily identifiable features of the planet Jupiter is its famous Great Red Spot, a gigantic storm in the planetary atmosphere, about 22 degrees south of the equator, that rotates counter-clockwise, akin to an anti-cyclone. Astronomers think the current red spot may have been present for at least several hundred years. The 17th century polymath and Micrographia author, Robert Hooke, is often credited with making the first recorded observation in May 1664. But many argue that it was his Italian counterpart, Giovanni Cassini, who should get due credit for his observations the following year.

Although he relied on London instrument maker Christopher Cock to build his microscopes, Hooke enjoyed a reputation as one of London’s finest makers of precision scientific instruments. He had a long-standing passion for astronomical instruments, like the telescope, and for clocks. In fact, as a child he once examined the various parts of a brass clock, and used what he learned to build his own working model out of wood. His microscopic observations formed the basis for his magnum opus, the Micrographia, which first appeared in bookshops in January 1665.

Astronomy was another of Hooke’s many interests. The Micrographia includes his illustrations of the Pleiades star cluster and lunar craters. He observed the rings of Saturn early on, and once attempted to measure the distance to the star Gamma Draconis, although his instruments weren’t quite up to the task. Around 9 pm on May 9, 1664, Hooke observed a small spot “in the biggest of the three obscurer belts of Jupiter, and that, observing it from time to time, within two hours after, the said spot had moved from East to West, about half the length of the diameter of Jupiter.”

But the spot Hooke observed might not have been what we now call the Great Red Spot. In a 1987 paper for the Journal of the British Astronomical Association, Marco Forlani suggested—based on Hooke’s original announcement and a 1666 recorded observation—that the observed “small spot” was embedded in what is now known as the North Equatorial Belt (or “great black belt”), while the Great Red Spot is currently found in the South Equatorial Belt. Rather, Forlani argued that what Hooke observed was more consistent with a transit satellite shadow—the moon Callisto was noticeably transiting at the time. 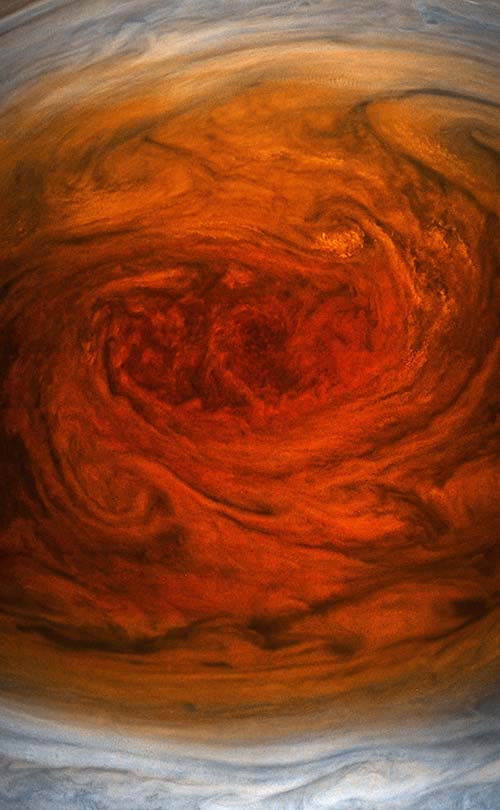 The Royal Society backed Hooke’s claim at the time. Forlani attributed their support in part to a kind of “scientific nationalism,” given Hooke’s prominent standing with the Society, bolstered further by his quarrelsome tendencies.

Cassini—who went on to become director of the Paris Observatory, changing his name to Jean-Dominique when he settled in France permanently—likely first observed the red spot between the summer and fall of 1665; he described his observations at length in letters to the Abbot Ottavio Falconieri. Cassini was able to weed out spots likely to be caused by a satellite transit shadow, and showed that the remaining observations of a spot in his data were indeed located on Jupiter’s surface. One in particular stood out: “a permanent one which was often seen to return in the same place with the same size and shape,” Cassini wrote.

He observed this spot 13 times between August 19 and October 30, eventually compiling a table of its transits that enabled him to calculate its rotation period: 9 hours and 56 minutes. The only attribute Cassini did not describe was the spot’s trademark red color, however, likely due to instrumentation limitations. According to Forlani, “It is out of the question that he would have been able to distinguish it because of the low light-grasp of telescopes of that time.”

There is little doubt among science historians that Cassini witnessed, repeatedly, a spot on Jupiter that bears a remarkable similarity to the Great Red Spot we know and love today. There is still some uncertainty as to whether it is exactly the same spot, centuries later, because of imperfect historical records. There were no reported observations of the red spot after 1713 for more than a century, until it was spotted again in 1831 in a drawing of Jupiter by Samuel Schwabe. American astronomer C. W. Pritchett “rediscovered” the Great Red Spot in 1878, and astronomers have been monitoring it closely ever since.

That said, “Even if the identity of the old Permanent Spot with the modern Red Spot is still in doubt,” Forlani concluded, “there can be no dispute over the identical nature of the phenomenon, and the discovery must be attributed to Cassini.”

Since 2004, astronomers have worried that the red spot might be shrinking, and that the process was occurring more rapidly since 2012. In 2019, several amateur astronomers reported a strange flaking off of bits of the red spot, fueling fears that Jupiter’s most famous feature might be disappearing at long last.

University of California, Berkeley, physicist Philip Marcus, however, has found no reason for alarm. At the 2019 APS Division of Fluid Dynamics meeting, he offered an intriguing counter-explanation for the flaking, based on his own computer models (see APS News, January 2020). He concluded that the flaking is a perfectly natural weather phenomenon on Jupiter, the result of the complicated fluid dynamics of the planet’s atmosphere. If Marcus is correct, the Great Red Spot should endure for several more centuries, barring some cataclysmic event.

Marcus, Philip. “Contrary to recent reports, Jupiter’s Great Red Spot is not in danger of disappearing,” The Conversation, November 25, 2019.