The Topical Group on Precision Measurements and Fundamental Constants

The Topical Group on Precision Measurement and Fundamental Constants (GPMFC) is a home for physicists interested in investigating the fundamental laws of physics, determining fundamental constants, and developing and improving basic measurement standards with high precision experiments. As GPMFC chair-elect Derek Kimball (California State University, East Bay) put it, “We use all possible tools at the disposal of the experimental physicist—and all calculations at the disposal of the theoretical physicist—to do precise measurements and calculations of various quantities in physics.”

Much of this work focuses on what Kimball calls “the precision frontier”—that is, the ability of increasingly precise measurements to reveal gaps in our current models of physics. “Experimental results may agree with predicted calculations when measured out to the 12th decimal place for example, but at the 13th or 14th decimal place maybe you find disagreement,” he explained. “That opens the window into something that we don’t yet understand and could represent the discovery of new physics.”

As GPMFC chair Susan Gardner (University of Kentucky) put it, “there are a number of reasons why experimental results may not agree with Standard Model predictions—not the least of which is that there is a deficiency in the Standard Model.” As became clear at the turn of the century with the development of quantum mechanics and relativity, physics models that work on one scale may break down at another. Precision measurement is an important tool for detecting such anomalies. 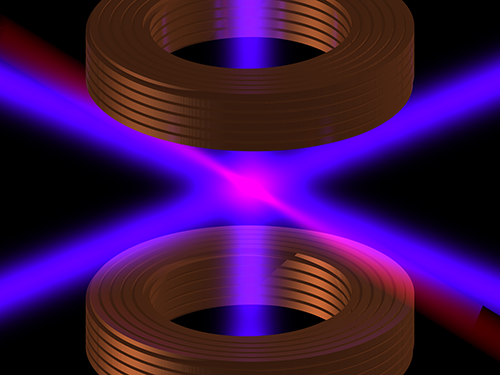 Atomic clocks are among the tools used for precision measurement. One such clock at NIST uses two magnetic coils (red rings) and an optical lattice (red laser beam), as well as intersecting violet lasers to cool ytterbium atoms, slowing their motion.

Since its founding in 1987, GPMFC has attracted a highly interdisciplinary membership base of approximately 500. The largest proportion of GPMFC members hail from the Division of Atomic, Molecular, and Optical Physics (DAMOP; see APS News April 2020), with a substantial number from the Divisions of Nuclear Physics (DNP) and Particles and Fields (DPF) as well.

“There is a natural interconnectedness between disciplines that appears when measuring particular quantities very precisely,” noted Gardner. Indeed, beyond including scientists from different branches of physics, GPMFC welcomes a unique mix of theorists and experimentalists owing to the necessary back-and-forth between practitioners of precision measurement experiments and theoreticians involved in the interpretation.

Vice Chair David Hanneke (Amherst College) pointed out that the diversity within GPMFC also extends to the scale of analysis, with group members pursuing precision measurement of everything from the fine structure constant (to describe the strength of electromagnetic interactions between elementary particles) to the Hubble constant (to describe the speed of the expansion of the universe).

Current topics of particular excitement within the purview of GPMFC include searches for dark matter and dark energy, improving the determination of lepton magnetic moments (a new muon g-2 measurement is expected this spring), the “proton radius puzzle” (a hotly debated question related to the charge radius of the proton), and, perhaps most notably, the search for permanent electric dipole moments of the electron, neutron, and proton. The Standard Model of particle physics predicts that these should have extremely small values, but theoretical extensions of the Standard Model invoking supersymmetry, for instance, predict much larger ones. With increasingly precise measurement tools, it may be possible to measure a nonzero result, finally bringing positive experimental evidence to bear on the question of supersymmetry.

Perhaps the most high-profile event in the world of precision measurement occurred last year, with the redefinition of four of the seven SI base units—the ampere, kelvin, mole, and most famously, the kilogram—in terms of fundamental constants (see APS News May 2019). Importantly, this marked the transformation of the SI system from being partially artifact-based (that is, defining units in terms of physical objects like standard weights) to being based entirely on experimentally realizable and interlinked fundamental constants. According to Hanneke, several GPMFC members were on the international committee that voted on this reshaping of the SI system, and many more directly worked on measurements that led to the updated definitions of various SI units.

Historically GPMFC has had a strong presence at both the APS April Meeting and the annual DAMOP Meeting in May/June, hosting invited talks, a poster competition, and, most notably, a popular one-day workshop on precision measurement topics (alternating between the April Meeting and DAMOP). This year’s workshop will be held at DAMOP, possibly in a virtual format, and will highlight “precision measurement searches for new physics.”

Looking forward, the GPMFC executive committee hopes for continued membership growth, particularly outside of its traditional AMO physics base. “We are a blended group of theorists and experimentalists, and my hope is that showcasing this will help people in different subfields appreciate each other more,” noted Gardner.

Increasing the diversity of GPMFC’s membership (currently more than 80 percent male) is another key priority. “There is so much amazing intellectual talent out there in the world, and any barriers we have to creating a broader community is hurting us because we’re losing those ideas and perspectives,” explained Kimball. On a hopeful note, Hanneke pointed out that most of GPMFC’s recent growth has come from a new and more diverse generation of students and post-docs.

Overall, GPMFC stands out as an innovative and collaborative community of scientists, promoting research and exchange of ideas at the frontier of fundamental physics.

“It’s a great time to be in precision measurement,” Kimball emphasized. “No matter what field you’re in—solid state physics, particle physics, astrophysics—there are all sorts of new tools for new measurements, and many diverse theories about physics beyond the Standard Model. It’s an enormous opportunity for new discoveries and new ideas.”

More information on this unit can be found at the GPMFC website.