Philip Warren Anderson, condensed matter physicist, Nobel Laureate, and demystifier of diverse fields of scholarship, died on March 29 at the age of 96. “He is easily the leading figure in condensed matter physics in the second half of the 20th century,” says Daniel L. Stein, Professor of Physics and Mathematics at New York University. “He was the guiding light.”

But Anderson was known for much more than condensed matter physics. He was a visionary in showing how fields as diverse as economics and physics, or sociology and computer science, could intertwine. His paper "More is Different" in Science Magazine in 1979, which served as a rallying cry for interdisciplinary investigations, set the stage for much of his later research into the interconnectivity of subjects. The article “could be thought of as a Magna Carta for modern complexity research institutions,” says Stein. And indeed, in 1984, Anderson co-founded the Santa Fe Institute, the first research institute dedicated to the study of complex adaptive systems. “He was very prescient,” notes Stein, who served as Anderson’s protégé while pursuing his doctorate. “He saw and thought about things before others came along to understand them. He was a natural at this. That was typical of Phil.” 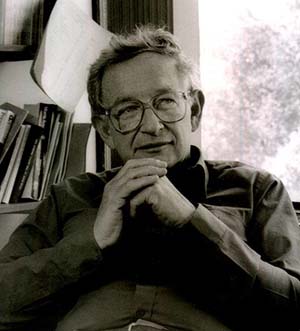 Early on, Anderson had been contemplating order and hierarchy in nature and how complexity can serve as a lens through which we can investigate many other fields. “Back then physicists tended to think hierarchically: that there is a hierarchy of fundamental science with particle physics at the fundamental level, and then nuclear, atomic, and so on, and beyond is biology and psychology, and so forth,” says Stein. “Phil’s argument was that each new level could not be understood or predicted solely using concepts borrowed from the previous level. It was an antireductionist argument. Conceptually, each level is just as fundamental.” Although other scholars were addressing this idea, “Phil was the first one to put this all together and to represent it in a forceful and coherent manner,” he adds.

As a condensed matter physicist, Anderson became fascinated by spin glasses—disordered networks of magnetic moments—viewing them as a bridge to other arenas, including economics, biology, and computer science. His appreciation for spin glasses demonstrated his ability to “extract the quintessence of experiment,” says Premala Chandra, Professor of Physics at Rutgers University. “He could look at the result of a measurement, sense what was important, and then ask intuitive questions that would launch a number of sub-fields.” With spin glasses, he developed a whole new set of methods to approach these problems, which are presently applied in combinatorial optimization, neural networks, and machine learning.

Anderson’s 1977 Nobel Prize in Physics was for his collaborative work on fundamental theoretical investigations of the electronic structure of magnetic and disordered systems.

As Anderson’s interests grew, he became increasingly vocal about issues of public concern, especially those touching the scientific community. He was vocal in his disapproval of the Superconducting Super Collider (SSC), skeptical of the supposed boost it would provide to science in the US and the claim that the spin-offs would provide great return on investment. Regarding spin-offs, he felt that “those arguments were overblown and largely inaccurate,” says Stein. “He argued that the evidence that the SSC would have a strong payoff in terms of technology spin-offs was weak and didn’t hold up under closer scrutiny. The bang for the buck would not be what was what people were claiming.” And the investment in the most fundamental of STEM? Anderson wanted to spread what limited financial resources the US had to other areas of science which he felt were just as important, adds Stein.

Legacy as a “Wonderful Human Being”

Those who had the opportunity to be around Anderson describe him as someone who was innately curious and desired to share that enthusiasm with others, especially those early in their careers. “I think Phil was extremely thoughtful about young people in physics,” says David Krakauer, President and William H. Miller Professor of Complex Systems at the Santa Fe Institute. Chandra notes a story about how Anderson was one of the only senior faculty at Princeton who would eagerly climb up the stairs to the students’ offices to share his latest ideas. “They were literally just flowing out of him,” she says. He had friendships and mentorships well beyond his students graduating. For example, Anderson threw Stein’s engagement party in Anderson’s own home.

But “Phil was quite measured,” adds Krakauer. “He didn’t speak when he didn’t have to.” And yet over and over he is described as very generous with his ideas, says Chandra. When Chandra approached him to be a co-author on a paper, he insisted an acknowledgement was sufficient.

Anderson had other talents as well. One night at a small gathering at the Coyote Cafe in Santa Fe, Brian Arthur, an economist at Stanford and at the Santa Fe Institute says that Anderson was asked if he played chess or checkers. "He shook his head and I asked him if he played any games. He said ‘no, not really.’ But it didn’t ring true to me, and I pushed him a bit. He said ‘I play a bit of Go,’ and to me that sounded like more than just a bit of Go—I had gotten to know Phil and suspected there was more there. I asked if he was any good, and he said ‘yeah.’ It was like peeling layers. I said ‘how good?’ and he said ‘Oh there are four people in Japan who can beat me,’ and then there’s dead silence and all the mouths were open and we’re staring at Phil and then he says ‘but they meditate.’"

As late as this winter, Anderson was still engaged with friends. Chandra and her husband, Rutgers physics professor Piers Coleman, met Anderson for dinner. “He was in good spirits,” says Chandra. “He brought along the obligatory bottle of red wine, hidden in his walker compartment. Once he sat down, he asked Piers to uncork it and then insisted on serving us all. We had to drink more than we intended just to make sure he did not consume too much! Phil was full of gusto and the conversation topics were wide-ranging. I am grateful for these poignant recent images of him, spirited and animated as ever.”

Adds Chandra: “Phil is a hero to so many of us for his intellectual breadth and depth, his wonderful curiosity, his magical intuition and his active support of young researchers. He will be sorely missed but never forgotten.”