Technologies that are putting self-driving cars on the road, such as laser sensors and multi-spectral cameras, are now enabling a different type of autonomous vehicle: self-flying drones. Researchers like Pratap Tokekar, an assistant professor at the Maryland Robotics Center at the University of Maryland, are developing small, unmanned aerial vehicles (UAVs) that can be deployed as tools to improve agriculture, inspect infrastructure, and monitor the environment.

Tokekar described his research at the September 2019 Frontiers in Optics/Laser Science meeting, organized by the Optical Society and the APS Division of Laser Science. His work was done while at Virginia Tech and focuses on precision agriculture, which uses technology to improve crop yields. UAVs are great for applications outside of farms, such as bridge inspection and aquatic pollution tracking. However, UAVs are especially well-suited to agriculture because of the nature of the work and the relatively safe flying environment.

“The goal of UAVs is really to do any task that is dull, dirty, and dangerous,” says Tokekar. “In terms of agriculture, there are certainly a lot of tasks that are dull, such as going and taking images of all the plants on your farm…this is something that is easily automated with robots that can help us improve the efficiency of our farming in general, using data-driven techniques.”

Tokekar’s use of UAVs for agricultural monitoring was made possible about eight years ago, thanks to advances in battery life and improved GPS technologies. Since farms are relatively free of aerial obstacles, vehicles equipped with onboard GPS and inertial measurement units for navigation can be deployed to begin collecting data with relative ease.

“The agricultural domain was the perfect fit because it’s structured enough that the UAVs can navigate easily in the environment and focus on the more interesting data collection aspect and not worry about things like obstacle avoidance or safety as one would for self-driving cars,” says Tokekar. 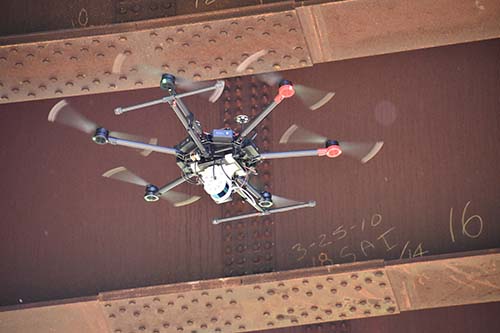 UAVs deployed in other applications, such as infrastructure inspection, might operate in areas where GPS signals may be interrupted, so they are equipped with other navigational tools like cameras and LiDAR—a laser sensor that allows the vehicle to build a 3D map of its environment. Such UAVs are ideal for inspecting bridges, a dangerous job for humans. In particularly tricky flying conditions, some UAVs are mixed autonomy and can be guided by a remote pilot.

In addition to navigational instruments, UAVs can be loaded up with a number of different scientific sensors, depending on the task at hand. For precision agriculture, the UAVs are typically equipped with thermal cameras, multi-spectral cameras, and temperature sensors. Data from these sensors can show whether some plants on a farm, like a new genetic variant, are growing better than others, providing farmers with information on what crops will be most profitable to plant.

However, UAVs can’t carry an unlimited sensor package: even with the best battery technology, the vehicles have a short time in the air. “Ten to 30 minutes may not be enough for what you want to do, and so you have a trade-off: if you want to put more interesting scientific sensors on a platform, you are reducing the flight time you have,” says Tokekar. “This is, in some sense, good for us as robotics researchers because now we have a constrained platform. Instead of just flying everywhere in the environment, now it is upon us to find the most interesting locations in the environment to collect samples from.”

To meet the challenge of short battery life in aerial vehicles, Tokekar’s team has been working on algorithms that can coordinate teams of vehicles, both aerial and ground, to maximize the amount of time UAVs spend in the air in interesting locations. Unmanned ground vehicles (UGVs), which have much longer battery lifetimes, can be used to transport UAVs to areas of interest and act as charging stations, where a depleted UAV could land and recharge before completing its mission.

“If you have one vehicle that has only 10 minutes, then the solution is to have multiple vehicles that can all operate simultaneously: you can have a swarm or collection of aerial vehicles all going and doing data collection, but that introduces newer challenges now because now you need these vehicles to coordinate with each other,” says Tokekar. “Then the questions become: How do you coordinate the actions between these aerial and ground vehicles? How do you get few ground vehicles to support a larger fleet of aerial vehicles? That’s something that we've actively been working on.”

Coordination between different types of vehicles is also important for UAV applications in aquatic environments where UAVs and robotic boats can be deployed together in response to oil spills or other pollutants in a body of water.

“We’re been working on developing algorithms to use a team of aerial robots with aerial sensors that can quickly disperse in the environment and map the extent of a pollutant, find the source of a pollutant, and then coordinate with a robotic boat that can go and collect physical samples,” says Tokekar.

As autonomous vehicles like UAVs improve and become more widespread, robotics researchers like Tokekar recognize the potential for such technologies to impact the workforce. Tokekar has been involved with a research project, as part of the National Science Foundation’s Future of Work program, to study the intersection between UAV technology and workers. One focus was on how using UAVs will impact infrastructure inspectors.

“We are not only improving the technology [for infrastructure inspection], but also working with stakeholders: This includes government agencies as well as inspection companies, and economists too, to see what the workforce [requirements] would look like if such a technology would become feasible in the near future,” says Tokekar. “How would training requirements change, would inspectors need to also be pilots and so on and so forth. It's an interesting program, but I think this is something that can have a tangible impact.”