How To Protect A Quantum Computer From Itself

The race to build the first useful quantum computer is on. In the last year, researchers have announced a flurry of results: in October, a team at Google reported that they’d demonstrated the first task, in which a quantum computer beat a conventional one in solving an abstract math problem. Meanwhile, IBM’s quantum team solved simple problems relevant to chemistry and finance on prototype quantum hardware that, if scaled up to future larger machines, may offer utility beyond classical computing. This March, Honeywell claimed they’d built the most powerful quantum computer yet, a machine made of trapped-ion qubits.

However, existing quantum computers cannot run arbitrarily complicated tasks because the hardware works imperfectly. These errors arise from external interference—changes in Earth’s magnetic field, for example, that might change a qubit’s quantum state—and from mistakes inside the machine itself, such as imprecisely calibrated lasers.

So one major hurdle on this decades-long track is to build a machine capable of correcting hardware errors in real time. “Quantum error correction is how we’re going to turn the noisy qubits we have right now into actual devices capable of solving real-world problems,” says Ted Yoder, a theorist working at IBM.

This year’s cancelled APS March Meeting was to feature presentations from researchers across both academia and industry on the latest research in quantum error correction. While theorists began considering quantum error correction more than two decades ago, researchers have only recently begun to move toward actual experiments. “We’re transitioning from being mostly a theorist’s playground to actual practical implementation,” says Yoder.

A collaboration between IBM and Raytheon, for example, has recently reported a demonstration of error correction in real time using five qubits. Meanwhile, on the theoretical side, researchers continue to optimize existing codes and develop mathematical formalism to better understand how the algorithms work. Another active area of research is how to apply theoretical insights to existing quantum hardware. 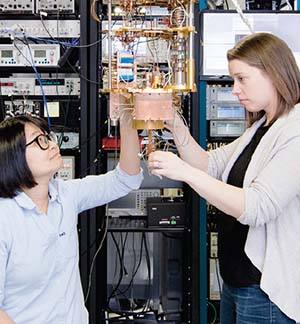 The basic task of quantum error correction can be broken into two steps: first, to detect errors that occur during computation, and second, to undo those errors. These errors arise for a variety of reasons: operations on one qubit may unintentionally alter an adjacent qubit’s state, for example, which is a specific error known as crosstalk. Researchers working on error correction develop algorithms that are robust to these unintended hardware errors.

Quantum errors present physicists with unique challenges. Classical algorithms correct errors in part by duplicating data. For example, in so-called classical repetition codes, a classical computer works with multiple copies of the same bit, so that if one bit is somehow flipped in transmission, the computer can apply a “majority rules” algorithm to correct that error. But this code doesn’t translate to a quantum computer because qubits are restricted by the so-called “no-cloning theorem,” which prohibits the duplication of a quantum state.

Summed up broadly, “in order to do quantum error correction, I need to check the state of the system without directly measuring it,” says Natalie Brown of the Georgia Institute of Technology, who is slated to start work at Honeywell this summer.

One popular strategy is to employ a constellation of “physical” qubits—multiple trapped ions or superconducting circuits, for example—to collectively work as one “logical” qubit of information. In this scenario, several "data" qubits hold the information being computed and it is coupled to supporting qubits known as “ancilla” qubits. The computer infers errors by directly measuring the ancilla qubits, but it leaves the data qubit untouched, preserving its quantum state. Yoder has recently shown that a class of error correction codes require a fraction of the qubits needed relative to one commonly used code. “We should be optimistic about the resources required for error correction,” he says.

Still, an error-corrected quantum computer will require lots of qubits. The computer that Google used in its widely reported experiment, for example, consists of 54 superconducting circuit qubits. To perform error correction, most of those are ancilla qubits, with only a few participating in the main computation task. Because existing hardware contains relatively few qubits, it has thus far been difficult to implement error correction algorithms. “We’re just now getting to the point of having enough qubits to do error correction,” says Brown.

Brown, who recently defended her PhD, has used simulations of a 36-qubit computer to study a particular type of error known as a leakage error. These errors arise because qubits are not perfect two-state systems; they can include third, fourth, or more energy levels, and a so-called “leakage” occurs when the qubit is accidentally put in one of these higher states. In an analysis of these errors, Brown found that leakage errors in ancilla qubits were much more damaging than those in data qubits.

Brown’s project was funded through the Quantum Information Science and Engineering Network (QISE-NET), a new NSF-funded fellowship that began in 2019, associated with the University of Chicago and Harvard University. The fellowship, geared toward graduate students in fields related to quantum technology, facilitates a project among the student, academic adviser, and an industry partner. Brown’s industry partner was IBM.

Both Brown and Yoder work on undoing errors with software. Michael Biercuk of the University of Sydney, on the other hand, has founded a startup company called Q-CTRL (pronounced “cue control”) that sells machine learning-driven tools to identify and minimize hardware errors in the first place. Q-CTRL’s customers include quantum computing startup Rigetti, the Massachusetts Institute of Technology, and the University of Southern California.

This design approach is called “control engineering,” and is inspired by the way the Wright brothers invented the first airplane. Prior to the Wright brothers, airplane developers avoided giving pilots much control over the aircraft, instead trying to make an airplane that flew mostly on its own. “The Wright brothers said, ‘Forget that,’” says Biercuk. “They were bicycle engineers. They knew that you can ride a bicycle upright down the street with a lot of control. They took that mindset and applied it to the development of aircraft.” Most famously, the Wright plane flew with deformable wings whose shape the pilot could control.

This hardware approach, combined with quantum error correction, could lead to useful quantum computers. “Within this decade we feel like we can see a quantum advantage, and error correction will be part of it,” says Yoder.