Astronomer Annie Jump Cannon was a rare creature for her time, when most women did not receive higher education, and were expected to pursue traditional domestic priorities. She defied those societal expectations and gave us a star classification system still in use today.

Born in December 1863, Cannon’s father was a shipbuilder in Delaware and a former state senator. Cannon recalled being fascinated by the glass prismatic pendants in the family candelabra, detaching them occasionally to catch sunbeams and play with the light. It was her mother, Mary Jump, who encouraged young Annie’s interest in the stars, observing them from the family attic. She learned about the constellations with the help of an old astronomy textbook. “Stars and prisms!” Cannon later said. “How prophetic was this baby amusement of the profession which was destined to fill my life.

Cannon’s mother also pushed her to study math and the sciences at what is now Wellesley College. Her mentor was Sarah Frances Whiting, a rare woman physicist in the US at the time. Cannon excelled academically and graduated with a degree in physics in 1884, serving as valedictorian of her graduating class.

Cannon did not immediately pursue a career in science after leaving Wellesley, returning to her Delaware home instead, where she worked as a tutor in math and history. She also developed a great deal of skill in photography, even traveling throughout Europe taking pictures with a box camera. She published a pamphlet of her photographs from Spain in 1893, which was distributed at the Chicago World’s Columbian Exposition that year. 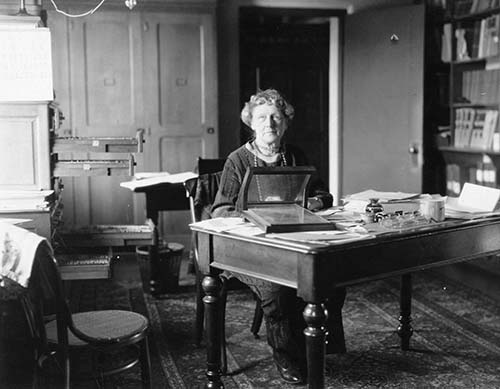 Sometime during these years, Cannon had survived a bout with scarlet fever, but the illness left her mostly deaf. Then her mother died in 1894, and Cannon found herself at loose ends and desiring change. She wrote to Whiting asking about a job opening, and her former mentor hired her as a junior physics teacher. This also enabled Cannon to pursue graduate studies in physics and astronomy, and begin to learn about spectroscopy. Eventually she enrolled at Radcliffe College, with the aim of gaining access to a better telescope, as well as the Harvard College Observatory.

In 1896, the director of the observatory, Edward Pickering, hired Cannon to join his “Harvard Computers,” thanks to her academic background and considerable experience with telescopes. Their task was to help complete the Henry Draper Catalog and to map and define every star in the night sky by their optical spectra. Male astronomers handled the telescope observations and took the photographs; the tedious task of painstakingly sifting through each plate; measuring brightness, position and color; and classifying the stars fell to the women in Pickering’s employ.

At the time, Harvard astronomers used a prism placed in front of a telescopes eyepiece to observe a star’s spectrum, and then drawing that spectrum by hand. Eventually, they began using one-inch square photographic plates to record the spectra. Pickering was able to speed up the process even more by placing the prism at the gathering end of the telescope. This enabled astronomers to image more than a single star at a time. Any star within the telescope’s view could be captured on 8”x10” photographic plates.

Cannon spent many nights scanning the night sky at the observatory, recording all the tiny fluctuations in the brightness of various stars, as well as synthesizing data from citizen scientists making their own observations around the globe. But she particularly excelled at classification, able to classify spectra in as little as three seconds. She would place each plate on a stand, and a mirror at the base would catch the sunlight to illuminate the horizontal spectral bands on the plate. Then she used a microscope to determine the spectral patterns and verbally communicate the classification to an assistant.

Two of Cannon’s fellow computers, Williamina Fleming and Antonia Maury, had devised competing classification schemes. Fleming’s system divided stars into 15 spectral categories, depending on how strong their hydrogen lines were. There were 22 categories in Maury’s more complicated system, based on the helium lines of a given star.

Cannon devised her own compromise classification scheme that is still used today, preserving some elements of both, which (we now know) essentially ranked stars in terms of temperature, from hottest to coldest. She based her scheme on how strong the Balmer absorption lines were for each star, dividing them into the spectral classes O, B, A, F, G, K, and M. Astronomy students still use a handy mnemonic to remember the classifications: “Oh Be A Fine Girl, Kiss Me.” Her scheme was formally adopted by the International Astronomical Union on May 9, 1922. That same year, Cannon spent six months photographing stars in the Southern hemisphere in Peru.

She also established the American Astronomical Society’s Annie Jump Cannon Prize. Astronomer Cecilia Payne-Gaposchkin, who used Cannon’s data to prove that stars were mostly made up of hydrogen and helium, was the first honoree, and received a gold pin in the shape of a spiral galaxy. “Isn’t it the first universe ever made by a woman?” Cannon remarked when she saw the pin. Prizewinners still receive a handcrafted piece of jewelry to this day.

In 1938, Cannon became the William C. Bond Astronomer and Curator of Astronomical Photographs, a position she held until her death on April 13, 1941, at the age of 77. She catalogued some 350,000 stars in her lifetime, discovering 300 variable stars, five novas, and one spectroscopic binary star in the process.

Sobel, Dava. The Glass Universe: How the Ladies of the Harvard Observatory Took the Measure of the Stars. New York: Penguin, 2016.