Nearly 70 APS members recently advocated for the Society’s policy priorities on Capitol Hill during APS’s annual Congressional Visits Day (CVD), and based on their feedback, the experience was positive and productive. The event was held just before the start of the APS Annual Leadership Meeting at the end of January.

Representing 26 states across the country, groups of these volunteers participated in nearly 100 meetings to make the case for science policy priorities determined by APS members and leadership. During the meetings, APS volunteers requested that members of Congress: support the Combating Sexual Harassment in Science Act; cosponsor the Keep STEM Talent Act; preserve methane emissions regulations for the oil and gas industry; introduce legislation to keep the Federal Helium Reserve open and create a robust helium recycling program; and include funding increases of at least 4 percent real growth for key science agencies during the fiscal year 2021 appropriations process. 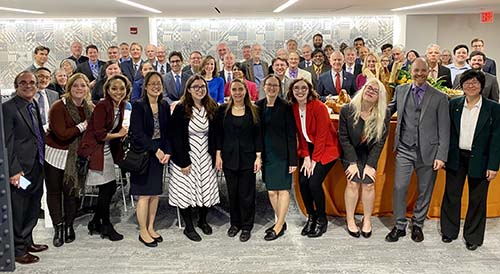 Almost 70 APS members from 26 states in the US visited Capitol Hill during APS Congressional Visits Day.

During the Capitol Hill meetings, leaders of APS membership units shared personal stories related to these science policy issues and explained to the staffers how those stories affected their congressional members’ districts and states. Thirteen sitting members of Congress participated in the meetings—a record number for the APS CVD.

“APS is once again elated to have our members advocate on crucial science policy issues that are not only beneficial to the physics community but to society as a whole. We are committed to being the leading voice for physics in the US, and that means supporting member engagement in effective science advocacy to help shape federal science policy,” said APS President Phillip Bucksbaum.

Shannon Swilley Greco, a science education senior program leader at Princeton Plasma Physics Laboratory, said she appreciated the opportunity to be “civically engaged.” She added, “I think I am a good ambassador for these issues, and I’d like to think I’m effective. And the experience helped me hone my communication skills.”

Leslie Atkins Elliott, professor of curriculum, instruction, and foundation studies at Boise State University, said she was drawn to the APS CVD because she “knew very little about how groups like APS help shape policy decisions.” Elliott continued, “I enjoyed the insights into that process and thinking about how science isn’t serendipity, but the outcome of deliberate actions by scientists and lawmakers.”

She noted that congressional staffers were “supportive of attracting the best and brightest” students to study and work in the US—a primary goal of the Keep STEM Talent Act.

“It doesn’t make sense to have these students trained here and then have them leave,” she explained.

Much to the delight of Jason Fry, assistant professor of physics and astronomy at Eastern Kentucky University, he received great news about the Keep STEM Talent Act during his meetings.

“US Rep. Tim Burchett (TN-2nd) and US Rep. Andy Barr (KY-6th) both said they would like to co-sponsor it,” he said, excitedly. “Everyone we talked to said it sounds like a good idea.”

APS CVD continues to be a highlight event for APS members and the Society’s advocacy efforts, said Callie Pruett, Senior Strategist for Grassroots Advocacy in the APS Office of Government Affairs (APS OGA).

“We equipped nearly 70 APS members to confidently go into meetings and speak on five key issues. And we strengthened our coalition of APS members who have already taken an active role in advocating for the future of science,” she said.

“There are new avenues now open with congressional offices to help advance the Keep STEM Talent Act and the Combating Sexual Harassment in Science Act, address the helium crisis, counter the proposed rollback on methane emissions, and increase the federal research and development budget,” she explained. “Our teams were well-prepared, organized, and on their A-game, and the feedback from the offices reflected that.”

Following the CVD, Pruett said US Sen. Chris Van Hollen (MD) and US Sen. Dianne Feinstein (CA) signed on to co-sponsor the Combating Sexual Harassment in Science Act in the Senate. Additionally, US Rep. Himes (CT-4th) and Van Hollen have both added their co-sponsorships the Keep STEM Talent Act in the House and Senate, respectively.

“These legislative developments have a direct connection to APS’s advocacy efforts. As follow-up and communication continues, we aim to see more results and co-sponsorships,” said Pruett.

“CVD is a great example of APS staff across departments and locations working together to provide a unique opportunity for APS members,” said Mark Elsesser, Associate Director of Government Affairs in APS OGA. “The day continues to be a success because of the strong coordination between several APS departments, including OGA, Communications, and Membership,” he said.

“We want to make sure our members are fully equipped to take advantage of as many opportunities as possible to make their voices heard on crucial science policy issues that impact the physics community and scientific enterprise,” he said.

The author is the APS Senior Press Secretary. To get involved in APS’s grassroots advocacy initiatives, contact Callie Pruett, Senior Strategist for Grassroots Advocacy, at pruett@aps.org.