It is clear from a recent report from the US National Academies that sexual harassment is a pervasive problem in the sciences. But a paper published in 2019 in the APS journal Physical Review Physics Education Research presented survey data showing that nearly 75% of women undergraduates studying physics had experienced some form of harassment and a Back Page article in APS News (April 2019) offered personal testimonies of women who had experienced harassment in physics.

"Think of it this way—three out of every four women who go to study physics as undergraduates being harassed—this should be shocking to everyone," said Miriam Deutsch, chair of the APS Committee on the Status of Women in Physics (CSWP). "It's horrific."

Catalyzed by these reports, the APS Board of Directors unanimously approved a statement in July 2019 that carried an unequivocal message: "Harassment and discrimination in the conduct of physics is unacceptable" (see article on Ending Sexual Harassment in Physics).

"The statistics are really disturbing. The statement sailed through the APS Panel on Public Affairs and the Board was very pleased with the wording," said APS CEO Kate Kirby. Such calls for change are only the beginning and the Society has been reinforcing its statements with a variety of actions. "Our Code of Conduct is very important as is the reporting system for cases of misconduct. We've received feedback that people are pleased with the outcomes so far, but I'm concerned that women still feel reluctant to report these things," added Kirby. 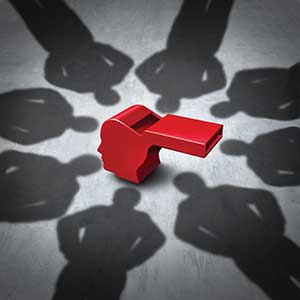 Among the activities in place or underway are:

Code of Conduct. All participants in APS meetings must adhere to a Code of Conduct, which states in part: "Disruptive or harassing behavior of any kind will not be tolerated. Harassment includes but is not limited to inappropriate or intimidating behavior and language, unwelcome jokes or comments, unwanted touching or attention, offensive images, photography without permission, and stalking." Violators of the code are subject to actions from reprimands to ejection from the meeting, as well as alerting authorities in the most extreme cases.

APS EthicsPoint. Violations of the Code of Conduct can and should be reported. APS has opened an EthicsPoint portal to provide a comprehensive and completely confidential way to do this, either online via telephone hotline. As stated in the EthicsPoint guidelines: "EthicsPoint makes these reports available only to specific individuals within [APS] who are charged with evaluating the report, based on the type of violation and location of the incident. Each of these report recipients has had training in keeping these reports in the utmost confidence." To file a report, call +1 844.660.3924 or go to aps.ethicspoint.com.

Societies Consortium on Sexual Harassment in STEMM. APS is one of the inaugural members of the Societies Consortium on Sexual Harassment in STEMM, with APS Director of Programs Monica Plisch representing the Society on the consortium's leadership council (APS News, July 2019). The consortium provides model policies, policy-law guidance, and practical tools to advance professional and ethical conduct, climate and culture in societies’ own operations and STEMM fields broadly, in support of the inclusion of all talent and excellence in the fields. (educationcounsel.com/societiesconsortium).

Legislation. APS, through its Office of Government Affairs, has been a leader in the efforts to enact legislation that helps US federal funding agencies combat sexual harassment in STEM. An example is the bipartisan Combating Sexual Harassment in Science Act, which would establish an Interagency Working Group to coordinate efforts to reduce sexual harassment, direct the NSF to award grants to institutions researching sexual harassment in the sciences with the goal of prevention and reduction, and require updates to the Academies report “On Being A Scientist: A Guide to Responsible Conduct in Research” (see the Sexual Harassment in the Sciences issue).

APS Ethics Committee. APS has traditionally issued statements on ethical matters, but in November 2018 the Society approved formation of a full Ethics Committee, which had its first meeting in June 2019 (APS News, July 2019). Committee Chair Michael Marder says that the committee will have a full and busy portfolio on all ethics-related matters, but two items are underway.

"We want to do a follow-up to a survey we did 15 years ago," says Marder. "Back then, nearly half of the early career physicists responded, many within a few hours, so we knew something big was happening. We want to know if things have changed—better, worse, or the same."

The other item is what do about members who have committed harassment. "We're inching up on draft policies about ineligibility for awards and revocation of honors or membership, but we don't have those in hand yet." (see the APS News article about the APS Ethics Committee)

APS Guidelines on Ethics. In April 2019, the APS Council adopted a new statement on ethics, which emphasizes that "The success of the scientific enterprise rests upon two ethical pillars. The first of them is the obligation to tell the truth, which includes avoiding fabrication, falsification, and plagiarism. The second is the obligation to treat people well, which prohibits abuse of power, encourages fair and respectful relationships with colleagues, subordinates, and students, and eschews bias, whether implicit or explicit" (see the APS Statement 19.1).

Site visits. Since the 1990s, CSWP and the APS Committee on Minorities have provided, on request, independent appraisals of the environment experienced by women and minorities within a physics department or research lab. The goal is to suggest ways that leadership can institute interventions or changes to address practices that might limit or reduce participation by underrepresented groups. Information on setting up a site visit and a list of past site visits is available at the Site Visits page.

This is only a partial list of APS activities. Future efforts will include offering bystander training and allies programs at all APS meetings, exploring expanding EthicsPoint reporting to situations outside of meetings, and hiring an ombudsperson.

"Here's the thing. Enrollment of women in physics has increased, but if this number of 75% of women being harassed doesn't go down by a lot, then there will be no moving of the needle of female representation in physics," says Deutsch. "How much more of this can women take? If they see this when they are 18 or 20, why should they think it will get better when they are 30, 40, or 50? We need an emphasis on education, messaging, and personal modeling of the best behavior."