Note: This article was originally published in the Raleigh News & Observer (December 9, 2019).

The collaboration between American and international science students at universities across the US has led to breakthroughs that have transformed the lives of North Carolinians. The biotech and pharmaceutical industries, aerospace and defense, food manufacturing and information technology sectors—which dominate North Carolina’s high-tech economy—all depend on the research done at universities and a pipeline of skilled workers.

Unfortunately, the collaboration is in jeopardy, as the number of international students applying for physics PhDs at US institutions is now in a major decline. According to a survey by the American Physical Society, international applications to physics departments outside the top tier dropped 22 percent during the past two years. That’s a serious problem because universities outside the top 15 generate more than 70 percent of the nation’s PhDs.

The application decline is advanced warning of economic risk to the US. Our ability to attract the very best students in the world provides us a critical competitive advantage that imparts innovation and generates the highest caliber talent for our domestic industry. It also funnels wealth back into the communities that support the universities and industries.

Fortunately, US Sen. Thom Tillis is in a position to help put the US on the right track. Under current law, international students pursuing advanced STEM degrees in the US can be denied student visas if they intend to work in the US after they complete their degrees. By co-sponsoring the Keep STEM Talent Act, which would enable high-skilled international graduate students to both study at US universities and provide a path to a green card if they secure job offers from US employers after graduation, Tillis would help ensure the US continues to attract the best and brightest students from around the world. 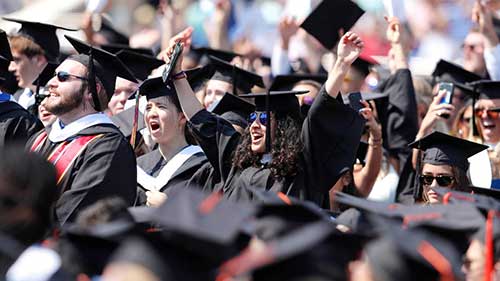 Graduates celebrate during Duke University’s commencement at Wallace Wade Stadium in Durham Sunday, May 13, 2018. The number of international science students applying to U.S. universities is in decline.

Tillis serves on the Senate Judiciary Committee, which has jurisdiction over the bill. Moreover, he has established himself as a leader on immigration issues, and his platform states that he supports “a strong, merit-based legal immigration system based on the needs of America’s economy and workforce.” Furthermore, a White House spokesman has stated that the nation is committed to attracting the “best and brightest” students to boost America’s competitiveness.

As a postdoctoral associate with a focus on nuclear astrophysics at Duke University, I’ve witnessed firsthand the synergy between American and international students as they tackle research addressing some of our nation’s most pressing challenges. American students—brimming with innovative ideas, entrepreneurial spirit and novel ways to address scientific problems—fit seamlessly with their international counterparts whose mastery of scientific material is invaluable in the innovation process. Together, with a common scientific goal, they transcend cultural boundaries and achieve greatness in research to the benefit of our nation’s scientific enterprise.

Despite that success, North Carolina faces hurdles in boosting its high-tech workforce. According to a report by Burning Glass Technologies, 41 percent of all open job postings in the state are related to science, technology, engineering and mathematics. And, alarmingly, the number of unfilled high-tech jobs in the state continues to grow, topping 31,000—a whopping 40 percent jump from 2018 to 2019, according to the North Carolina Technology Association. I believe most of us share the same goal of maintaining American technological supremacy. The quality of our higher education system is a major factor in this objective.

History has proved that when American and international students collaborate on research, great things happen. Sen. Tillis can help maintain that collaboration and sustain our state’s and nation’s economy, by co-sponsoring the Keep STEM Talent Act—our best path forward toward ensuring the US remains a high-tech leader in an increasingly competitive world.

The author is a postdoctoral research associate with a focus on nuclear astrophysics at Triangle Universities Nuclear Laboratory, Duke University.