Philip H. Bucksbaum holds the Marguerite Blake Wilbur Chair in Natural Science at Stanford University, with appointments in Physics, Applied Physics, and in Photon Science at SLAC. He was also the founding director of the Stanford PULSE Institute. Bucksbaum graduated from Harvard in 1975 and went on to the University of California at Berkeley where he received his PhD in 1980 for atomic parity violation experiments.

Bucksbaum is a Fellow of the APS, the Optical Society, and has been elected to the National Academy of Sciences and the American Academy of Arts and Sciences. He is also the recipient of the 2020 Norman F. Ramsey Prize in Atomic, Molecular and Optical Physics, and in Precision Tests of Fundamental Laws and Symmetries. Within APS he has been active in DAMOP and DLS. He has served as a Laser Science Divisional Associate Editor for Physical Review Letters, he was a member of the Physical Review Letters Advisory Board. [A full bio is available on the President page.]

APS News talked with Bucksbaum about his plans for the 2020 presidential year and the challenges and opportunities facing the physics community. The interview has been edited for length and clarity. 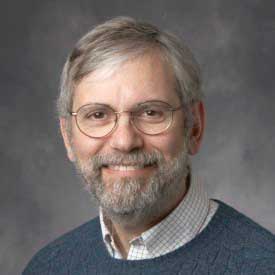 Q: How did you start out in physics?

In the 1970s, when I was an undergrad at Harvard, there was a lot of excitement in fundamental physics about the Weinberg-Salam model and the fact that the weak interaction and electromagnetism might be two manifestations of the same thing. A number of groups were coming up with ways to test that. In my senior year, I went out to different schools to see where I wanted to go to grad school. At Berkeley, the Commins group was using this cool new technology—tunable dye lasers—to study Weinberg-Salam. It turns out that one of the important tests is searches for parity violation in atomic photo-absorption. So, joining this effort was an easy decision and that's what I ended up doing for my PhD. I’ve been a laser jock ever since.

At Bell Labs after graduation I became more interested in what you could do with lasers beyond precision measurements and I’ve never looked back. I’ve done quite a large array of different kinds of research made possible by ultrafast laser pulses. And of course, this has been the set up for the whole story of my career because the opportunity came along to get involved with research with x-ray lasers—an ultrafast source of angstrom wavelength light. That was too exciting to pass up. So, it’s been a continuous path and I haven’t really jumped fields. Some people absolutely love lasers and I’m one of those people.

Q: What are your priorities for your presidential year at APS?

It’s really an honor to have this position. I've been an APS member since my undergraduate days. There is so much that the APS staff and our 55,000 members do for physicists and being able to be the leader of this great membership organization is a terrific privilege. Physics is good for you—fundamental research ultimately improves all of our lives. APS is in a position to speak for the community when there are issues that can directly affect the health of the community and our ability to do science.

As we start the year, front and center is an ongoing discussion of how to respond to growing calls for restriction on international scientific contact. I'm personally concerned that we must not do things that will threaten our ability to have global engagement in physics.

There are some cases where this is obvious. You can't have a gravitational wave observatory without having a worldwide aspect to it. It takes that kind of scale. And you could say the same about particle physics and CERN, and observational astronomy and other mega projects that require international contact.

This is true even in the smaller science done in individual labs, quantum information science for example, where the need for openness may be less obvious. Even though it's fundamental science, there are other groups competing with us. But it's the free aspect of that competition that drives innovation. If we were cut off from being able to talk to our competitors, the science would suffer quickly. And so, we're working on making that case.

Q: Some of these issues were discussed at the new APS Annual Leadership Meeting in Washington in January, right?

Yes. This meeting is an expansion of the annual leadership convocation that always happens at the end of January, beginning of February. We’ve expanded it to invite international participants, people from the federal science policy establishment, and have a round table discussion on these issues and to be able to better make the case for the importance of openness in science.

The APS leadership realizes that this is an extremely important issue. We're helped a lot by the fact that APS has developed an effective Office of Government Affairs and that office is getting members involved. In fact, thousands of our members are involved in some way or another in advocacy. And so when we speak, we can speak as a community and it's clear within government that we're the voice of the physics community.

Q: What else is on the agenda for the Presidential Line this year?

An important item is that our CEO Kate Kirby will be stepping down at the end of the year. And of course, she has been so important to APS. She became APS Executive Officer in 2009 before APS engaged in governance reform and she led us through that reform to become a more effective and up-to-date professional member society. And Kate also took on this job of guiding us to develop a strategic plan, published last year (APS Strategic Plan: 2019).

As president, I chair the APS Board of Directors, and probably the most important job of any board is to hire and oversee the CEO. That’s job one. So we have a search committee working on this, and we’ve been getting good professional advice to carry out the search.

Q: How is the Strategic Plan working out?

Two years ago the priority was making the strategic plan and last year it was launching the strategic plan. And this year we will continue implementing it. In close conjunction with this is a focus on the APS culture—not only research integrity, or the staff culture, but all the ways that we treat each other as physicists and professionals and fellow humans. You could ask, should it really be the job of APS to worry about that? I would say that yes, if APS is to be effective in advancing its strategic goals and the physics community, then we need to have a healthy culture.

What does that consist of? First of all, there are things that are obvious but need work, such as advancing diversity, equity, and inclusion. For one reason or another, the profession of physics is not as inclusive as other academic disciplines. The numbers bear that out. For example, the percentage of African Americans in physics is very low. Women are underrepresented in physics. So, we know that we can do better and we want to figure out how to move in that direction as a Society.

Another area related to culture that has great importance is professional ethics. We now have a formal APS Ethics Committee, which is wonderful. They are working hard to oversee APS ethics policies, and provide us with constant guidance, and we expect the broader membership will benefit from that.

Q: Journal publishing is a big part of what APS does. How do you see that part of the Society?

Every scientific society’s board of directors is interested in the future of publishing and we are too. Our Physical Review journals are terrific, and physics couldn’t be physics without publishing at this highest level of scholarly integrity. In addition, many of the services that APS provides to the physics community are paid for by our successful publishing operation.

But we are concerned about the future of scientific publishing, and especially how changes in publishing over time may affect the process of academic peer review, and the financial viability of academic journals. For example, something that's been widely reported in the news is that government agencies like NSF have been asked by the White House to consider the ramifications of the “zero embargo time,” that is, publishing papers with immediate free access to all, with no waiting period. That could have a very harmful effect on publishing, but there's a lot of uncertainty. We have to be part of that discussion and we are—we've been actively weighing in on that.

Q: What are your thoughts about the future of membership growth at APS?

As an organization, we need to focus more of our membership activities on this group. Graduate students and postdocs are so important, and they make up a large fraction of our total membership. That’s partly because students get a discount to join. Of course, that's an incentive, but another incentive has to be that we start serving them better because we know that they're the future of our profession.

One idea we started discussing last year is to have student chapters. It’s a pilot project right now, but eventually I hope grad students may be able to go to a website and find out how to start an APS grad student chapter. We want to help those groups and understand what their needs are and then expand from there.

Q: One part of the Strategic Plan is financial sustainability. Can you say something about that?

People who are not in universities might not be familiar with the word “development,” which means raising private money for good causes, in this case APS. This is something [Past President] David Gross has been very interested in and has been focusing on. Something I would like to target, and David and I agree on this, is the Congressional Science Fellows program. This is one of the real gems of what we do.

The program pays the salaries of scientists, often at the post-doc level, to go to work for members of Congress. They are not science advisors or APS advocates; they are regular congressional staffers on Capitol Hill who happen to have scientific knowledge and a science perspective, and they get asked to do all kinds of things.

But here’s the problem. You have 535 voting members of Congress and only about 40 Congressional Science Fellows. Of those, APS supports two. When I was APS vice president, I chaired the committee that interviewed the applicants and we had such a good final group of prospective fellows. So why don’t we have more fellows in Congress? It’s not the lack of applicants and it’s not because Congress doesn’t want them—Congressional offices compete for these people. It’s really about the money. This would be an ideal thing to raise money for and I hope we can make progress on it this year.