Physics training can take one far in life, and for three speakers at this year’s Division of Nuclear Physics meeting in Crystal City, VA, it’s taken them to interesting places outside of academia. Nancy Jo Nicholas (Los Alamos National Lab), Clair J. Sullivan (GitHub), and Elaine Luria (US House of Representatives) each spoke at the meeting, describing how their training in nuclear physics prepared them for their jobs.

National Labs for Nuclear Science and Beyond

Los Alamos National Laboratory (LANL) is one of the three national-security-focused labs in the US Department of Energy lab system, along with Sandia National Laboratory and Livermore National Laboratory. LANL was created for the singular goal of building the first atomic bomb, but since its founding in 1943, it has blossomed into a vibrant scientific community, with projects beyond weapon design.

“In addition to promoting basic science and research, we do very mission-driven science, technology, and engineering,” said Nicholas, Associate Director for Global Security at LANL. “Some unique scientists have come to work here for many years and it's a hybrid scientific community, but it's also a very artificial community: It's all alone in the middle of the desert.” 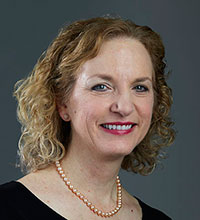 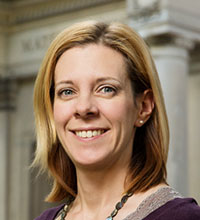 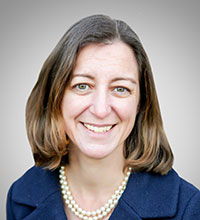 Many of LANL’s missions still revolve around national security, in the area of non-proliferation—as Nicholas said, “it takes a weapons lab to find a weapons lab.” But LANL continues a rich tradition of fundamental nuclear physics research and even has a place for theoretical physicists: LANL has the only division dedicated to theoretical nuclear physics in all 17 national labs.

Nicholas was herself a graduate student when she first arrived at LANL to work on the linear accelerator (LINAC), which is where she did her thesis experiment. The trip across the country, from her home institution of George Washington University in Washington, DC, to LANL came with many firsts.

“We didn't have an accelerator, so we would get to go out to Los Alamos to work on the LINAC—that was really exciting,” said Nicholas. “It was the first time I'd ever been West of the Mississippi river, the first time I ever rode in the back of a pickup truck, and I got to see a real-live tumbleweed blowing in the wind. It was an exciting place to go for the summer.”

After receiving her master’s degree from GWU, Nicholas opted to not pursue a PhD, thinking she would teach high school—but this was out of reach without additional training in education. Rather than immediately go back to school, she opted to return to LANL to work on the Strategic Defense Initiative (aka the Star Wars program), which was to deploy a space-based system to counter nuclear missile threats from the Soviet Union.

“I thought [the program] sounded interesting, so I went through the process of getting a security clearance, but by the time my clearance had come through, the Soviet Union had dissolved, the Star Wars program went away, and I had to come up with something new,” recalled Nicholas.

Nicholas became involved with arms control projects, helping to train inspectors from the International Atomic Energy Agency who monitor nuclear facilities all over the world.

“The reason we are able to do this [training] at Los Alamos is that we have a lot of nuclear physicists who are working to develop radiation detection instrumentation, designing those instruments, building prototypes, developing algorithms, troubleshooting those detectors and deploying them out into the field,” said Nicholas. “There are lots of areas where science is really focused on serving society, and even though we're a mission focused lab and our mission is national defense and national security, there are lots of opportunities to pivot the capabilities that we come up with to apply to society uses.”

LANL also played a role in Clair Sullivan’s career as one of the first stops on her journey from nuclear engineering to machine learning: “[Nancy Jo Nicholas] was actually my first boss,” she recounted. Sullivan conducted her PhD research in nuclear engineering at LANL and worked there as a staff scientist before spending several years working for the US government. She then transitioned into a career in academia at the University of Illinois as a professor, where her research would catapult her into the world of data science and machine learning.

“The research that my group was getting involved in [at the University of Illinois] was looking at a lot of, I don't like this term, "big data"—looking at what happens when you have more data than fits into the memory of one computer,” said Sullivan. “But I'm a nuclear engineer, I'm not a data scientist, I’ve got to learn something about data science. I got into a boot-camp and I said ‘wow, I really like this.’”

Using that experience, Sullivan started her own company doing data analytics for the ski industry before ending up at the software development tech firm GitHub as a machine learning engineer. In her talk, she reflected on how this happened—partially a tendency to “go with the flow”—and why physicists are well suited to careers in data analytics.

“The first thing I will tell you is that as a physicist—a nuclear physicist, astrophysicist, whatever, fill-in-the-blank physicist, we're always learning,” said Sullivan. “And sometimes we get to learn some really cool stuff.”

She also cites the tendency of physicists to get excited about new science as an influence, and many people were starting to get excited about data science while she was a professor. A citizen-science-based project called SafeCast using portable detectors that could be ordered from the internet to monitor radiation levels became the first so-called big data project Sullivan worked on: A network of these detectors was generating 2 terabytes of data a day, meaning Sullivan had to learn how to manage and analyze a data avalanche.

Another factor in data science is the need for collaboration, which is something Sullivan says physicists are used to. For the radiation detection project, Sullivan’s group collaborated with the geography department at the University of Illinois to extract meaningful data from the radiation detectors. To further advance her skills, she participated in a data science incubator.

“[The incubator’s] job to take people with degrees in physics, chemistry, statistics, economics and turn them into data scientists in seven weeks. It was incredibly intense,” said Sullivan.

Sullivan then shared advice for physicists interested in jumping to a data analysis role. She said many physicists already have some prerequisites, like math and statistical modeling skills, computer programming, and experience with technical presentations. Physicists may not, however, have experience with some of the software engineering aspects of data analysis.

“Software engineers and computer scientists that I worked with were just way more efficient at putting code into production. That’s not my skill-set,” said Sullivan. “These are the people you should be making friends with—they’re going to show you how to do what they do.”

From the Navy to Capitol Hill

The final speaker of the session has also seen her career transform from nuclear physics to something different: After retiring from 20 years of service in the Navy as a nuclear engineering officer, Elaine Luria is now a member of the US House of Representatives representing the Second District of Virginia. When Luria was elected in 2018, she was in good company: She was part of a record 102 female representatives elected. But she recalls a time when this wasn’t the case, as she was the only female physics major in her class at the Naval Academy, and one of the first to enter the Naval Power program.

“As my time at the Naval Academy was ending, we could do what's called service selections where you pick what field you want to go into in either the Navy or the Marine Corps. Only recently, the Navy's nuclear program opened up to women. When I had started at the Naval Academy it had not been, but by the time I graduated, I had the opportunity to serve as a surface warfare officer and nuclear engineer,” said Luria. “So what does that mean? I drove ships, I operated nuclear reactors on aircraft carriers for 20 years.”

Luria’s naval career took her from her first post, stationed in Japan where she was in charge of manning weapons systems, to operating eight nuclear reactors simultaneously aboard aircraft carriers. She also served as assistant to the Admiral of the Second Fleet, traveling to countries all over the world, among other posts in her two-decade-long career.

“I commanded in combat the 400 sailors and all of the amphibious landing craft on the East Coast, and all of that started out with a physics degree and going into the Navy Nuclear Power Program,” said Luria. “It’s a nice example of how those analytical skills that you learn through physics can translate into a future of career developments and ideas.”

About a year after retiring from the Navy, Luria decided to run for Congress in Virginia. Now as a member of the House of Representatives, and one of the few with a technical degree, Luria uses her background in science to promote evidence-based policies as co-chair of a task force on climate change, and as a representative for a district bordering the Chesapeake Bay.