With its December issue, the African Physics Newsletter concludes its first year of publication. It has been a formative year for the newsletter during which it saw a doubling in subscribers, an expansion of its Editorial Board, and a refinement of its format and content. The newsletter steps into its second year primed to continue its de facto role as the voice of physics in Africa.

APS agreed to support the newsletter in response to a survey of African physicists, summarized in the December 2017 issue of APS News, that revealed a need for a Pan-African communication vehicle. The newsletter has a novel publication model, and it is noteworthy that the news items are being gathered, selected, and composed by a volunteer editorial board of African physicists. APS is providing the final copyediting, formatting, and distribution.

The launch of the newsletter was timely; a lot is happening in the African physics community. Several successful schools, such as the African School on Electronic Structure Methods and Applications and the School on Fundamental Physics and Applications are having their tenth anniversaries. There is now an African Materials Research Society. In the past three years, the number of African national physical societies has increased from nine to fifteen. Five of the recent six have also united to form the West African Physical Society. The Abdus Salam International Centre for Theoretical Physics (ICTP) opened its first institute in Africa, the East African Institute for Fundamental Physics in Rwanda. 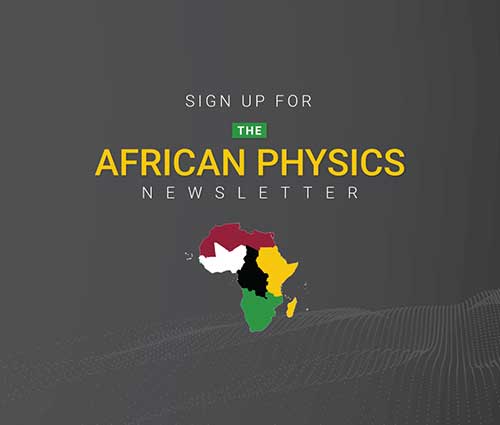 However, large communication gaps often exist among physicists within a nation, between nations, and between African and non-African physics communities. For example, of the 15 African physical societies, it appears that only two regularly publish a newsletter. Bridging these gaps by reporting on events such as those mentioned above was a motivation for starting the newsletter.

A number of published articles have been noteworthy. An article by Sekazi Mtingwa (Chair of the Commission on Development of the International Union of Pure and Applied Physics) entitled “Physics on the Move in Africa” highlights how over the past twenty years the groundwork was laid for new organizations, collaborations, and large infrastructure projects. Cairo University celebrated the Silver Jubilee of the National Institute of Laser Enhanced Science (NILES). Physicists in Tanzania reported on a successful program for high school girls that improved the performance of STEM training at the university. Reported in the soon to be distributed December issue is an announcement of the Portuguese-speaking countries forming a physics union.

Perhaps the most interdisciplinary article appeared in the May issue and described how mass accelerator spectrometry is being used to determine the age and study the causes of the recent deaths of several baobab trees, the Trees of Life, that are native to African Savannahs and can live for millennia. In addition, there have been numerous reports and announcements of various schools, awards, workshops, and conferences, and several articles have described notable physics. For example, one article reported how the MeerKAT, the radio observatory that is the first phase of the Square Kilometre Array telescope in Africa, was used to search for the puzzling, missing hydrogen gas in the NGC1316 galaxy. The puzzle was solved: The vast majority of the neutral hydrogen is not in the center of the galaxy but is largely in two tail-like complexes north and south of the galaxy.

With each issue, the newsletter news sources have become more diversified and inclusive. The editorial board now has at least one editor representing each of the North, South, East, West, and Central regions of Africa, and a network of contacts (news reporters) is being established. With articles such as the one you are reading now, the newsletter is also reaching out to others, particularly to those in the African diaspora, to become readers and contributors.

The newsletter is a quarterly email. Subscriptions are free and open to all. To subscribe, simply go to the African Physics Newsletter form. The coming December issue also has information on how to contribute news articles. Whether you are from Africa or just interested in African physics, we encourage you to subscribe and emphasize that by reading, and especially by contributing, you will be strengthening the voice of physics in Africa.

The author is a computational physicist at Los Alamos National Laboratory, a member of the APS Committee on International Scientific Affairs, and an APS Fellow.