Today we take our ability to transmit and receive radio signals wirelessly across long distances for granted. Many scientists in the late 19th century contributed to the development of this critical technology, most notably an Italian inventor named Guglielmo Marconi.

Marconi was born into Italian nobility in 1874. (His Irish-Scottish mother was the granddaughter of whiskey distiller John Jameson.) He had no formal schooling, but was educated by private tutors in math and science. As a teenager visiting Livorno one winter, he found a mentor in physics teacher Vincenzo Rosa, who introduced young Marconi to what were then new theories about electricity. Marconi was also allowed to attend lectures at the University of Bologna by a physicist named Augusto Righi, who introduced him to the work of Heinrich Hertz.

In the 1890s, Marconi began working on developing so-called wireless telegraphy, a system capable of transmitting telegraph messages without the electric telegraph’s connecting wires. He was not alone in this endeavor; scientists had been scheming about ways to accomplish this for decades. But Hertz’s 1888 demonstration of radio waves (initially called “Hertzian waves”) had inspired physicists, including Marconi’s mentor, Righi, who wrote a review of Hertz’s discoveries.

Marconi was just 20 years old when he began conducting experiments in his attic at home in Bologna, Italy, with his butler serving as his assistant. In the summer of 1894, he devised a storm alarm with a battery, a "coherer" (a tube with metal filings that passed a current in response to radio waves), and an electric bell, which rang in response to radio waves from lightning. After building the storm detector, Marconi devised a way to generate radio waves at the push of a button. He claimed to have invented his “black box”—essentially a spark transmitter with an antenna—in December 1894. 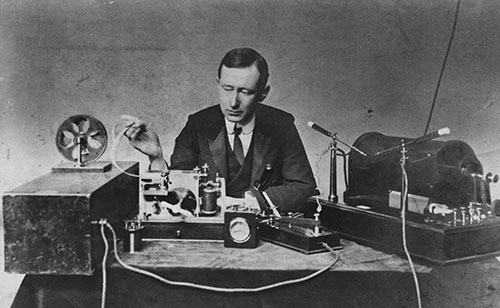 Marconi demonstrating apparatus he used in his first long distance radio transmissions in the 1890s. The transmitter is at right, the receiver with paper tape recorder at left.

With his father’s support, the young inventor developed portable transmitter and receiver systems capable of operating over longer distances. Initially he could only manage a distance of half a mile, but in the summer of 1895, he transmitted and received signals over two miles, including over hills, by raising the antenna height and grounding the transmitter and receiver. Recognizing the potential of his wireless system for commercial and military communications, he wrote to the Italian ministry requesting funding to further develop it. The minister never replied, dismissing the request as the ravings of a lunatic.

Marconi traveled to London in 1896 with his box, where the Italian ambassador assured him it would be easier to get the funding he needed. He entertained audiences with a “conjuring trick”: making a bell ring on the other side of the room using radio waves instead of a cable. And he proved his system could transmit Morse code signals across 3.7 miles. On May 13, 1897, he sent the first wireless communication over open sea, across the Bristol channel: it simply read, “Are you ready?” That same year, he founded the Wireless Telegraph & Signal Company in the United Kingdom.

Next Marconi turned his attention to wirelessly transmitting a signal across the Atlantic Ocean from a station he set up at Marconi House in County Wexford. He supported his antenna with a kite to get better reception, and on December 12, 1901, claimed he had made a successful transmission between a power station in Cornwall to Newfoundland—a distance of 2,200 miles.

But there was reason to be skeptical of this claim. The test was conducted in daylight, which hinders long-distance transmission of radio waves, and Marconi was expecting to hear the Morse code taps for the letter “S.” So Marconi tried again, first in February 1902 while aboard the SS Philadelphia. This time he sent the transmission at night, achieving an audio distance of 2100 miles, compared to the 700-mile distances achievable during daylight. Finally, on December 17, 1902, he successfully transmitted the first trans-Atlantic radio signal from a station in Nova Scotia.

It took several more years before wireless telegraphy was fully developed. But thanks to the wireless telegraph, famed arctic explorer Robert Peary was able to tell the world about his discovery of the North Pole via radiotelegraphy in 1909. And in April 1912, the supposedly unsinkable Titanic set out on its maiden voyage across the Atlantic and hit an iceberg, creating a deep gash in the ship’s hull. The wireless telegraph operator sent out a series of increasingly frantic Morse Code messages, including the now-famous distress signal: dot dot dot dash dash dash dot dot dot (SOS).

Radiotelegraphy even helped apprehend an escaped murderer in England. Early in 1910, Dr. Hawley Crippen chopped off his wife Cora’s head and tossed it into the English Channel, burying the rest of her body under the floorboards of his house. He then ran off with his lover, Ethel LeNeve. On July 22, Scotland Yard received a wireless telegraph message from the captain of the SS Montrose, bound for Quebec, reporting two suspicious passengers. It was Crippen and Ethel in disguise. Crippen was ultimately convicted of murder and hanged.

Marconi’s work was not without controversy. Serbian inventor Nikola Tesla made a public demonstration of radio communication in St. Louis, Missouri, around the same time as Marconi, and the two men fought for recognition as the primary inventor and patent holder of wireless telegraphy. Although Tesla patented a wireless device as early as 1897, it was Marconi who became known as the “father of wireless communications.” He shared the 1909 Nobel Prize in Physics for his contributions with Karl Ferdinand Braun, who invented the phased array antenna in 1905. Tesla was not a co-recipient.

Marconi infamously joined the Italian Fascist party in 1923 and was rewarded by Mussolini with the position of president of the Royal Academy of Italy in 1930. But his health was failing, and he suffered nine heart attacks over three years. The final, fatal attack occurred on July 20, 1937. Shops in Italy were closed for a day of national mourning, and as his funeral commenced, the BBC and Post Office wireless systems observed two minutes of silence in his honor.