The APS Division of Quantum Information

The APS Division of Quantum Information (DQI) is a home for those interested in the cutting edge of quantum information: its foundations, its physical manifestations, and the usefulness of, feasibility of, and progress toward quantum computing. Specifically, this spans quantum entanglement, quantum communication, quantum cryptography, quantum algorithms and simulations, physical implementation of qubits (the basic unit of quantum information), the conceptual and mathematical foundations of quantum theory, and more.

Quantum information is one of the newest fields in physics. It was born in the 1980s when physicists began considering how to apply the unusual behavior of quantum systems to computation. DQI got its start in 2002 when APS members formed the Topical Group on Quantum Information, Concepts, and Computation (or “Quicc”). This eventually evolved into the Topical Group on Quantum Information (GQI) in 2005. After a decade of work growing its membership and increasing the visibility of quantum information, this group achieved full division status in 2017, becoming DQI.

Now 2,400 members strong, DQI ranks among the largest divisions at APS. DQI secretary/treasurer Emily Pritchett, a research scientist at IBM, said that the vibrancy of the division today represents an important symbolic victory for the field in general.

“A decade ago, typical for a new subfield of physics, there was doubt as to whether quantum information was a credible field that belonged in academic physics departments,” she explained. “Of course, one only has to compare the job opportunities now to those a decade ago to see that this [field] has been enormously successful.”

A large part of DQI’s success lies in its interdisciplinary nature. Quantum information engages not only physicists but also mathematicians, computer scientists, and engineers, making DQI an important entry-point to APS for researchers with an academic home outside of physics. Furthermore, within physics, the many proposals for and prototypes of quantum computers build on research from several other areas of the field. In particular, many DQI members also have a home in the Divisions of Atomic, Molecular, and Optical Physics (DAMOP) and Condensed Matter Physics (DCMP; see APS News April 2019). 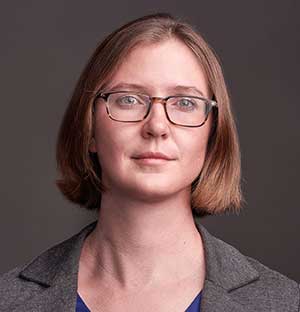 DQI also boasts an especially strong connection to industry. Its members are exposed to opportunities outside of academia—particularly for graduate students and early career scientists.

The main driver in quantum information research is the advantage quantum computers may hold over classical computers. Whereas classical computers use bits (which are binary, either 1 or 0), a quantum computer uses qubits (simultaneous superpositions of states 1 and 0). Because the qubits are all connected by quantum entanglement, in principle quantum computers could outperform classical supercomputers. The general scientific consensus is that large scale quantum computers will be able to perform certain tasks exponentially faster than classical computers but will require millions of high precision physical qubits and quantum error correction. With 20-50 qubit devices currently available to researchers, Pritchett describes the field as being in the Noisy Intermediate-Scale Quantum (NISQ) era (see APS News, May 2019). A great deal of DQI-sponsored research focuses on demonstrating and characterizing the quantum behavior on these devices.

This issue is especially timely (and increasingly visible in the wider world of popular science) given Google’s late-October claim that it had demonstrated the first experimental realization of what Caltech physicist John Preskill has called quantum supremacy (see Nature October 2019). Google claims that its 53-qubit quantum device performed a calculation in 3 minutes and 20 seconds that they estimate would take over 10,000 years for a classical supercomputer to complete.

According to Pritchett, herself involved in IBM’s rival quantum computing work, this announcement has sparked even more enthusiasm in the field, and many researchers are now involved in verifying Google’s claims. Some researchers at IBM and elsewhere have argued that the claim is exaggerated, saying that the calculation Google’s quantum device performed was contrived, and that the most powerful supercomputers would take on the order of two days (as opposed to 10,000 years) to complete it. But many researchers agree that this is an important proof-of-concept that quantum computing is possible, though wider use of quantum computing outside the research setting is still years away.

Other hot topics in the quantum information field include development of quantum software and the possibility of topological quantum computers, which would encode information into a complicated state of matter analogous to the twists and turns in a braided rope.

“Even though creating topological qubits is hard and hasn’t been done yet, the hope is that when you have a qubit encoded topologically you need less error correction—so fewer qubits are needed to do the same task,” said Pritchett.

This excitement in the quantum information field is reflected in DQI’s growing presence at the APS March Meeting. At the 2019 meeting DQI sponsored over 90 invited talks and received over 900 contributed abstracts (up about 25% from 2018). Numbers are expected to grow further for next year's March Meeting in Denver. DQI already has 18 focus sessions planned for this upcoming meeting, including quantum machine learning, quantum error correction theory, and quantum computation for networking and information security.

DQI has a great deal to offer its members, as shown by its long history of work to bolster what is now one of the most vibrant areas of physics. The division curates a productive and collaborative March Meeting experience every year, sponsors awards and fellowships to elevate researchers in the field, and hosts roundtable discussions and tutorials for early-career members to build their skills and professional networks.

DQI’s executive committee also prides itself on its political advocacy for more quantum information research funding along with the APS Office of Government Affairs and other scientific societies. In December 2018 the US Congress passed the National Quantum Initiative (see APS News, October 2018), allocating $1.2 billion for research into quantum information science over five years and creating a National Quantum Coordination Office at the White House Office of Science and Technology Policy.

More information about the division can be found at the DQI website.