A Look into the Future with Augmented and Virtual Reality

Millions of Americans wear some form of corrective lenses, with many opting for prescription glasses to fix a variety of vision issues. But some researchers are pushing to make glasses do even more: virtual reality and augmented vision was one of the themes of this year’s Frontiers in Optics/Laser Science meeting in Washington, DC, hosted jointly by the Optical Society and the APS Division of Laser Science (September 13-17).

Over the course of the conference, experts in virtual reality (VR) and augmented reality (AR) explored the challenges and potential of developing these technologies for a variety of practical uses in several sessions. At the opening session for the VR/AR theme, Douglas Lanman (Facebook Reality Labs), Henry Fuchs (University of North Carolina, Chapel Hill), and David Luebke (Nvidia) provided an introduction to the field. At a special event, Thad Starner (Georgia Institute of Technology), one of the longest continuous users of AR, discussed the social implications of AR and VR.

Lanman’s talk on state of the art VR systems primarily focused on meeting the optics challenges that arise when the eye interacts with a computational display that is attempting to mimic reality. Since the display is close to the wearer’s eyes and flat, the usual adjustments the eye would make to focus on objects at varying distances aren’t effective. VR researchers like Lanman are combining optics research with vision science to help the VR display and the eye work together to create a more realistic display.

“The goal with VR is to follow up on all the optics research that [started with] television to modern times and really make something that’s indistinguishable from reality,” said Lanman. 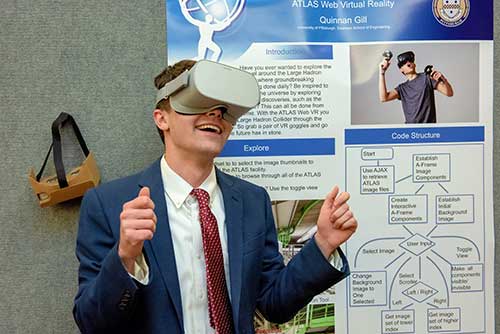 An APS member takes a virtual reality headset for a spin.

AR glasses, which allow the user's normal vision to be merged with images from tiny computer displays already exist, but next-generation AR glasses will have added features, like virtual personal assistants. Such features are being researched by Fuchs’ lab at UNC, including a prototype headset for shared telepresence—an AR concept that allows a user to “see” another AR user and their surroundings. This prototype is equipped with eight cameras: four capturing a user’s environment, two recording the user’s body and another two directed towards the user’s face, which are used to recreate body and facial positioning virtually. Since these cameras will collect massive amounts of data, Fuchs notes data privacy and security will play a role in how AR will be used.

Luebke addressed some technical challenges to AR development, some of which overlap with VR, but others are unique to the challenge of melding views of reality and synthetic objects. To create a satisfying AR experience, Luebke says that headsets must have high enough resolution—enough to read a newspaper at arms-length—and embed information spatially into the real world. Novel optics design is necessary to further develop AR, but the potential uses of AR make it worth the challenge.

“We can create an inclusive AR display that supports user needs, such as [vision] disorders, prescriptions, and eye conditions,” says Luebke. “Myopia is an epidemic, and AR might be able to help.”

In his later talk, Starner discussed many of the applications for the current generation of AR displays, along with the social impacts of wearable devices. As a long-time AR display user, Starner has experienced the transition of AR glasses from bulky, odd-looking headsets to nearly indistinguishable from normal glasses. AR, he says, allows for microtransactions (like checking the time, directions, or a text message) to take less time than checking a smartphone, and therefore wearers will be less distracted by their technology. He also described practical uses for AR, from laptop replacements for doctors, allowing more face-to-face interaction with patients, to real-time captioning for the hard of hearing.

“With technology, misuse is always a risk, but AR can cut down on the amount of time we spend looking down at phones, spending time in the digital space,” says Starner. “Any tech can be used for good or bad—[we] try to encourage the good.”

For more on the Frontiers in Optics/Laser Science meeting, visit frontiersinoptics.com.