Can We Inspire Every High-School Student to Take Physics? Texas Nearly Did

Public discussion of public education in the United States follows conventional narratives and the narratives focus on failure. From A Nation at Risk [1], to Rising Above the Gathering Storm [2], and Waiting for Superman [3], we learn over and over again “Why the United States’ 50-year failure to modernize our education system threatens our economy, social stability, and democracy" [4]. The narrative conventions permit isolated students, teachers, or schools to succeed against the odds, but leave no room for real success.

Physics frequently has a starring role in presentations of the ills of American education. Less than half of US students take as much as one year of high school physics [5], although in Europe and Asia [6] four years of physics is common. The US finds itself in this situation partly because of the shortage of qualified teachers. More than 60% of physics teachers lack either a major or minor in the subject or full teaching certification [7]. Year after year physics ranks near the top of the subjects school district administrators find most difficult to staff [8]. This problem has persisted for decades. Programs to prepare STEM teachers such as Noyce Scholarships [9], PhysTEC [10], or UTeach [11] have led to substantial local increases in teacher production but haven’t yet reached the scale needed to change the landscape. That would require coordinated national or state-level policies that are nearly impossible to imagine. Or are they?

The modern wave of Texas education reform began in 1984 with a commission led by Dallas businessman and later presidential candidate Ross Perot [12]. Reform elements included exams for graduation, class size limits, and the legendary “no pass, no play” provision that attempted to set academic achievement on almost the same level as football. The first proficiency exams were followed by successive waves of exams, producing a “Texas Miracle” in education that George W. Bush featured in his successful run for the presidency. The Elementary and Secondary Education Act of 2001, better known as No Child Left Behind [13], exported mandatory high-stakes exams to the whole nation. No policy has so frequently been debunked, so generally reviled, or so durably maintained through bipartisan support as school testing [14].

In April of 2006, Texas Governor Rick Perry called a special legislative session to rework the school finance system. The central bill of the session included a reform of high school graduation plans. There were to be three levels: Minimum, Recommended, and Distinguished. Students would automatically be enrolled in the Recommended plan and would have to opt out to enter either the Minimum or Distinguished Plan. A required element for either Recommended or Distinguished graduation was the 4x4: four years each of English language arts, social sciences, mathematics, and science. The science requirement included biology, chemistry, and physics. It was perverse to do this because it was as well known in 2005 as it is today that there are not enough physics teachers. The main argument for the 4x4 curriculum was that it would make it possible for a typical student to apply to a 4-year college once they graduated, since the curriculum corresponded to college entrance requirements. There was also the fact that the policy sounded like a monster truck, and that never hurts.

Texas education datasets make it possible to keep track of what happened as a result. The response to the law was not instantaneous. If one follows the cohort of students entering high school in Fall 2007 then 51% of them eventually took at least one physics course (see Fig. 1). This was already high compared with national averages, but the rate of physics-taking kept rising and by 2011, 77% of students entering high school that Fall took a physics class before graduation. Economic divides were not eliminated; for the cohort entering high school in 2011, 73% of students eligible for free and reduced lunch took physics, while for those not eligible it was 84%. And there was a gender gap, but in favor of women, 79% of whom took physics versus 75% of men. This accomplishment in providing high school physics went unremarked, unstudied, and unrewarded, and therefore was susceptible to being undone. 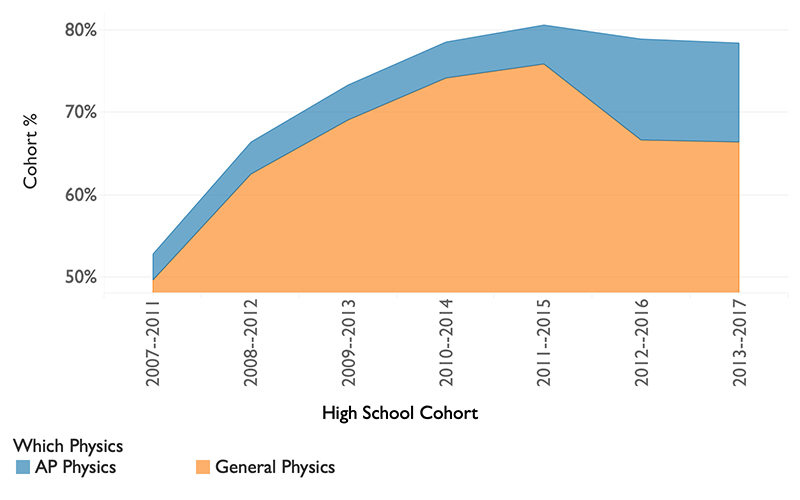 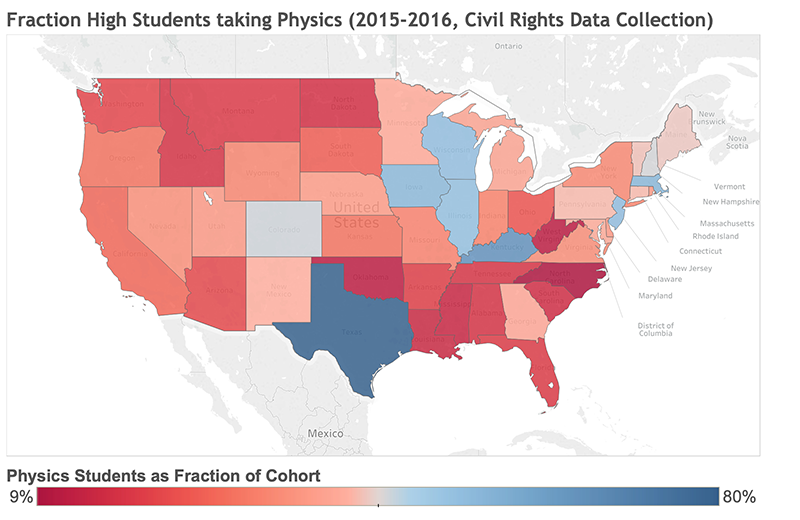 In 2013, Texas returned to curriculum reform. The climate had changed and now was being driven by a backlash against testing. Algebra II was singled out as particularly objectionable [15], but physics and chemistry were also caught up in the general revulsion against forcing students, against their will, to leave open the possibility of going to a four-year college. The default high school graduation plan dropped back to the situation prior to the 4x4, stopped requiring both chemistry and physics, and allowed students to choose between them as previously. High school physics enrollment was bound to drop.

Except that it did not. It dropped only by about 1% for students beginning high school after 2011, and with the introduction of AP Physics I, the share of AP Physics for the 2012 cohort sharply rose, resulting in complete parity of men and women taking AP Physics.

In case there remains a suspicion that the Texas longitudinal dataset itself is flawed we have an independent way to examine the matter. Physics course-taking is regarded as a matter of civil rights, and the US Department of Education requires all states to provide information on physics course-taking, broken down by various under-represented groups [16]. For every high school in the US one can estimate the size of the high school cohort by taking the maximum of 10th and 11th grade enrollment and dividing this into the number of students who take physics. This is not as accurate as following individual student course records year by year as we did in Texas, but it makes national comparison possible. The result appears in Figure 2. This is the only map of the US in which Texas is the deepest blue. In fact no other state comes close to Texas in the fraction of students taking physics. Even Massachusetts, widely regarded as the state with the strongest public education system, has only 55% of its students in physics, while Oklahoma and West Virginia are down at 12%.

The final consolation for a skeptic in view of these data is the assurance that the Texas physics courses, even if they have been offered, must be terrible. Indeed, there is little direct information about the quality of the courses, particularly since a high school physics exam was one of the casualties of the anti-testing movement of 2013.

However, a state where the overwhelming majority of students takes physics provides opportunities for further improvement that otherwise would be inaccessible. For example, OnRamps [17] provides a dual enrollment physics course where high school students can simultaneously earn high school and UT Austin credit. In 2018-2019 there were 4,598 students enrolled in Physics I: 81% qualified for college credit at the end of the year and 59% accepted it, and 2,437 high school students earned a C- or better on the same class activities, homework, and exams taken by upper-division premedical students at a research university. There are 350,000 students in the Texas high school cohort; a large number, yes, but with internet connectivity higher education institutions in the state could be supporting courses for all of them.

Why was Texas able to provide physics to so much larger a fraction of its students than other states? While teacher production in most states has been dropping for the past 5 years at over 3% per year, with particularly sharp drops in New York and Pennsylvania, Texas produces the largest number of teachers in the US and production has been growing [18]. The reason for this is not entirely comforting. More than half the new teachers in Texas come from alternative certification programs, and these are dominated by for-profit companies that provide much of their preparation online. The increase in production from alternative certification programs has more than offset a small decline in production from universities. Furthermore, Texas does not have a standalone physics teaching certificate. Most physics teachers have a science certificate which includes the possibility of teaching biology, chemistry, earth sciences, and physics, although no one has a major in all four of those subjects.

Still, what is most remarkable, and most encouraging, is that once physics became available in high schools across the nation’s second-most populous state, and once schools were directed to develop the capacity to offer it to all students, they largely succeeded. And then schools kept offering it, advisors kept recommending it, teachers kept teaching it, and students kept taking it even when the requirement went away.

The author is in the Physics Department at The University of Texas at Austin, Co-Director of UTeach, and lead instructor for OnRamps Physics I. S. Stephens assisted with the data analysis. Longitudinal course-taking data come from the Texas Education Research Center.