In the United States alone, roughly three million people live with epilepsy, a disorder resulting in chronic seizures. Many of these people are able to control the disorder with treatment, such as medication or surgery, but others with uncontrolled epilepsy face a number of limitations, such as not being allowed to drive a car.

Louis Nemzer, a biophysicist, and a group of collaborators at Nova Southeastern University are taking an interdisciplinary approach to improving quality of life for people with uncontrolled epilepsy: The group is developing a device that would use machine learning to alert wearers to an oncoming seizure, acting as an early warning system, and they presented their latest results at this year's APS March Meeting in Boston.

“Patients with diabetes have real-time continuous glucose monitors that can give alerts when their blood sugar is too high or too low—we’d like to have something similar for people with epilepsy,” says Nemzer. “You’d have some kind of wearable device, small and lightweight, to alert a patient to take action and get to a safe space when a seizure is likely to occur.”

Neuronal activity in the brain generates detectable electrical signals at the surface of the brain; under normal conditions, the signals are relatively smooth and predictable, but during a seizure, these impulses become a chaotic electrical storm. Electroencephalograms (EEGs) measure this electrical activity and can indicate what state the brain is in.

Nemzer’s group is using simulated EEG data, coupled with actual patient data, to train a deep learning algorithm—a type of artificial intelligence (AI)—to pick out neural patterns that indicate a seizure is coming on. During the training, EEG patterns are fed into the algorithm, which "learns" the difference between normal and epileptic brain recordings. The hope is that, when exposed to new EEGs from actual patients, the algorithm will report that a seizure is imminent well in advance.

“We’ve been using simulated neurons to generate data to train the model, the advantage with that being that it’s easy to distinguish between the healthy functioning state and the seizure state,” says Nemzer. “With machine learning, you need a lot of data, so we’re combining actual patient data and simulated data to find the right patterns.”

According to Nemzer, this concept of creating a device to sense seizures before they happen isn’t new, but progress in machine learning algorithms have allowed the idea to become more realizable. 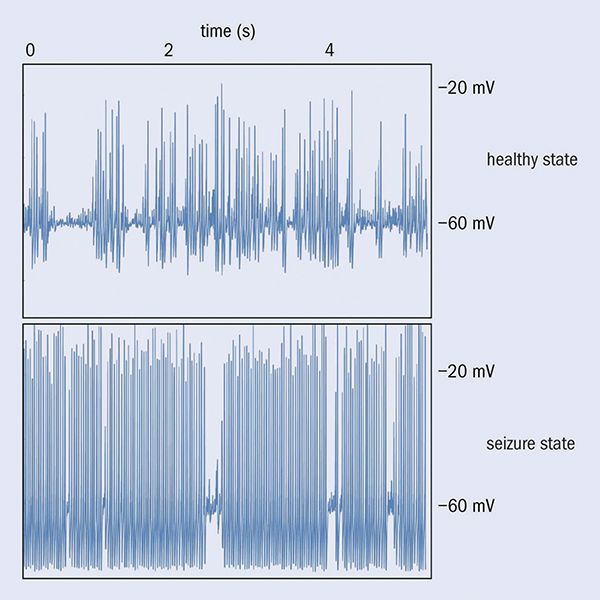 “People have been interested in this for many years, but it’s resisted our best attempts at a seizure warning system, and the difference now is that the tools are so much better,” says Nemzer. “A lot of progress has been made in terms of the ability of machine learning to make predictions even if the underlying physics is not completely understood.”

Efficient machine learning algorithms are especially important for this kind of project because each device would need to be personalized for each wearer. The AI responsible for detecting the signals from the brain that indicate an oncoming seizure would need to undergo a training period to identify what constitutes a warning signal for each individual.

While this project is still in the AI training phase, Nemzer believes in its potential to positively benefit people with uncontrolled epilepsy.

“What got me interested in this topic is the fact that quality of life for people with epilepsy can be severely affected—often times they’re not legally allowed to drive, or operate heavy machinery,” says Nemzer. “Some people have suffered injuries or even death because of unpredictable seizures—I’m hopeful that this kind of early warning system would have a significant improvement in people’s quality of life.”